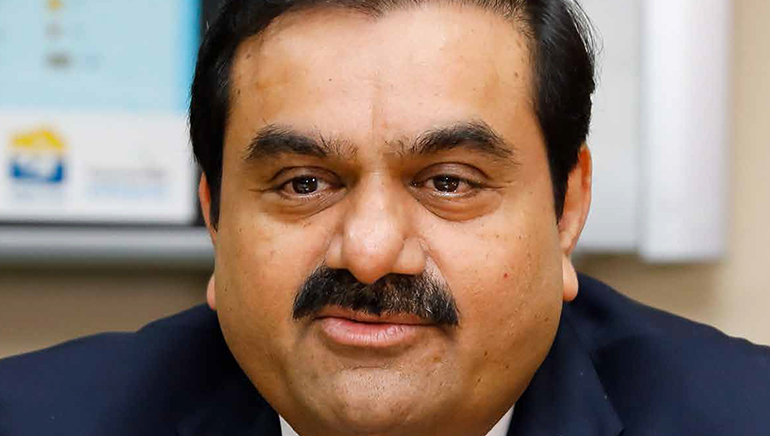 Born to Shantilal and Shantaben Adani – who had migrated from the town of Tharad in the northern part of Gujarat – Gautam Adani has seven siblings. His father was a textile merchant.

Gautam Adani was keen on starting his own business, so after studying at Sheth Chimanlal Nagindas Vidyalaya in Ahmedabad he took admission for a BCom degree in Gujarat University, but dropped out after the second year, and instead of joining his father’s textile business, travelled to Mumbai in 1978 to work as a diamond sorter for Mahendra Brothers.

Learning the craft and the secrets of the trade, he wasted no time and after 2 to 3 years established his own diamond brokerage firm at Zaveri Bazaar, Mumbai. However, holding a white heat of desire in his heart to grow, succeed and do something even bigger, he joined his elder brother Mansukhbhai Adani in 1981 to manage the operations of a plastics unit in Ahmedabad, recently bought by Mansukhbhai. This venture turned out to be Gautam Adani’s gateway to global trading through polyvinyl chloride (PVC) imports. Growing rapidly, by 1985 Gautam Adani started importing primary polymers for small-scale industries. Success came naturally because of his consistent and ingenious efforts, and in 1988, he established Adani Exports Limited, which is currently known as Adani Enterprises Limited and which is the holding company of the Adani Group. Adani Exports started with exports of agricultural and power commodities, and as due to the economic liberalization in 1991 trading and exporting became favorable for his company, he diversified and expanded his businesses into trading of metals, textiles and agro products.

Then, it happened which catapulted Adani Group into unprecedented global success, recognition and respect. In 1993, the Government of Gujarat announced managerial outsourcing of the Mundra Port and in 1995, Gautam Adani bagged the contract. The same year, he set up the first jetty, and began port functions from the Mundra Port & Special Economic Zone; later shifting them to Adani Ports & SEZ Limited (APSEZ). Initially, Gautam Adani took approval from the Gujarat government to set up a harbor facility to handle its own cargo at Mundra Port; however, sensing the potential in the project, he decided to turn it into a commercial port, and built rail and road links to it by individually negotiating with more than 500 landowners across India.

In the meantime, Gautam Adani focused on developing other verticals and in 1996 itself, founded Adani Power Limited – the power business arm of the Adani Group, and generated success in all verticals together. Holding thermal power plants with a capacity of 4620 MW, Adani Power Limited is the largest private thermal power producer of the country. It is also India’s largest closely held thermal coal producer and the largest coal trader.

Entering the power generation business in 2006, he acquired Carmichael Coal in Queensland and Abbot Point Port in Australia. In 2018, he completed the acquisition of the power business of Anil Ambani’s Reliance Infrastructure in Mumbai. He has also entered the petrochemicals sector in a USD 2.6 billion joint venture with Germany’s BASF and has also won bids to run 6 domestic airports.

Rapidly succeeding as one of the fastest-growing professionally owned enterprises in India, while maintaining world-class quality standards and a customer-focused approach, Adani Group had reached a milestone of more than INR 250 billion by 2009 itself, in just two decades, and in the process, had also become one of India’s most trusted and diversified trading houses.

Known for quickly taking decisions and believing in fast growth, Gautam Adani asserts, “If you analyse a problem too much, you will never tap the opportunity”. Today, the Adani Group has diversified into more than 50 companies dealing in resources, logistics, energy, agriculture, defence, aerospace, real estate, ports, special economic zones, IT-enabled services and several more, while its core businesses include commodities trading, edible oil manufacturing, Mundra port operations and distribution of natural gas.

A special pattern visible in Adani Group’s expansion is the synergy among its business units with which they stay together and make each other more productive and competitive. The Group emphasizes on converting partnerships into winning relationships and is committed to satisfy its stakeholders by constantly delivering good returns. Ranked as the 4th most powerful person in India, his net worth is estimated to be around USD 11.6 billion as of July 2019.

He shares, “The macroeconomics of India have never looked stronger and our continued investment has been driven by our confidence that over the next two decades, India will easily be one of the Top 5 largest nations in the world fuelled by the demand of its own population and energised by the sheer potential of a young workforce unparalleled anywhere else in the world.”

Gautam Adani has led the Adani Group to several prestigious national and international awards and honors for its corporate performance, and has bagged numerous awards himself for his professional commitment, entrepreneurial success and unique vision. Adani Group has received the Dun & Bradstreet – Rolta Corporate Award for outstanding performance in Trading, the Five Star Export House award, the FIEO’s Niryat Shree Gold Trophy, the ICSI award for Excellence in Corporate Governance, the GCCI Export Appreciation Award, the International Code for the Security of Ships and of Port Facilities (ISPS) for compliance by Ministry of Shipping Govt. of India, the SRTEPC award, etc. Its Mundra Port and SEZ has been awarded the Port
Authority Award by Lloyd’s List for the Best Port in Middle East and Indian subcontinent. Gautam Adani himself has been honoured with the Excellence in Management Award by Chief Minister of Gujarat.

Gautam Adani is the President of the Adani Foundation, and together with his wife Priti Adani, has been leading it passionately and ingeniously. Founded in 1996 as the corporate social responsibility arm of the Adani Group, it works in the spheres of education, community health, medical aid, rural infrastructure management & development, sustainable livelihood management and charitable initiatives not only in Gujarat, but also in Maharashtra, Rajasthan, Himachal Pradesh, Madhya Pradesh, Chhattisgarh and Odisha.

The Foundation initially worked with a few rural communities around the Adani port at Mundra, and gradually developing a team of committed professionals who have been painstakingly planning and implementing developmental and growth programmes in rural communities, it has enabled holistic development of several communities it has worked with. The Foundation follows a participatory approach to ensure a sense of ownership for the services it provides and the community wealth it creates, and through institutional and individual grants for education and medical relief has brought about tangible changes in the lives of rural communities.