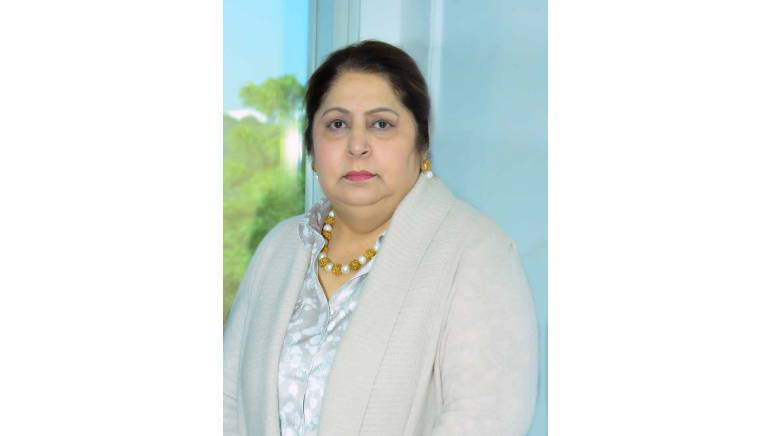 A woman of substance, Mrs. Manju Sharma is a dynamic personality who attributes her success to her courage, confidence, commitment, and consistency. To her greatest credibility is the work she did in setting up Eternal Hospital, which is one of the most advanced healthcare centres in the state of Rajasthan from scratch. Co-Chairperson and Managing Director of the hospital, she had stepped into the healthcare market with no prior professional training a little more than a decade ago but with her grit, she today is one of the leading names in the industry.

Mrs. Sharma is revered for her selfless dedication to her work. She believes in doing her unconditional best and admits that she is completely detached from the name and fame associated with her work. Her greatest source of motivation is the smile that she sees on the faces of the patients who leave her facility healed and healthy. Her commitment to the greater good of society can serve as an inspiration for the millions of aspiring entrepreneurs and business runners working in the healthcare industry.

SURFING THROUGH THE TIDES OF LIFE

Mrs. Manju Sharma’s life was full of unexpected ups and downs. She had to face her own challenges and outgrow them since a young age, which made her the strong lady that she is today. Her belief system is rooted in a simple thought that neither the good times nor the bad times last for longer and hence one should not be bothered about the circumstances and just keep a great focus on their dreams and aspirations.

Born in Myanmar to world war 2 veteran, Mr. Nand Lal Kaul and wife Mrs. Indira Kaul, Mrs. Sharma spent her formative years there in a privileged environment. She had everything that a child could ask for, yet her parents taught her to keep her feet firmly grounded and not take anything for granted.

These lessons helped her sail through a tough time in life that shortly followed as the family had to move to Delhi and they had to face some financial difficulties. The young girl that Mrs. Sharma was back then was not demotivated by the circumstances. In fact, taking from her parents’ positive outlook, she believed that the bad time, too, shall pass soon.

She further moved to Jaipur and completed her education before getting married to renowned cardiologist Dr. Samin Sharma and moving to the USA with him.

A few years later, she once again got to step into her corporate shoes, this time as an entrepreneur, to support her husband set up a healthcare facility in the form of Eternal Hospital in Jaipur.

FIGHTING AGAINST THE ODDS

Like most women who aspire to be entrepreneurs, Mrs. Manju Sharma’s journey did not begin on an encouraging note.

The year was 2007 and her husband had got allotted a piece of land in Jaipur for a state of the art healthcare center by then Rajasthan Chief Minister Vasundhara Raje. However, given his prior commitment to his patients in the USA, it was not feasible for him to leave the states and get back to India. That’s when Mrs. Sharma showed her interest in taking up the project herself.

But their family did not encourage her decision as she was a woman who had lived away from India for 35 years then. They were also skeptical because of her lack of experience in the construction business. However, her mother did not leave her side. She supported Mrs. Sharma’s choice to build this facility from scratch and encouraged her to follow her dreams.

Two years into the project, the world once again came crashing down on her as she lost her beloved mother in an accident. Losing her strongest supporter made Mrs. Sharma’s feet shaky but she got back once again, and this time even stronger.

Today, she takes pride in setting up one of the best healthcare centers of the city in the most ethical way and with full honesty. JCI accredited multispeciality hospital of Rajasthan, an affiliate of Mount Sinai Hospital New York, Eternal Hospital over the years has become a boon for the community and it is one of the leading health care units and research institutions of not just the city but the state. Under her able leadership, the hospital has to its laurels the credit of performing the world’s first MyVal Transcatheter Aortic Valve Replacement/ Implantation, India’s first navigation guided balloon sinuplasty, and Rajasthan’s first-ever Left Bundle Branch – Cardiac Resynchronization Therapy. The hospital has also added a new tertiary care center.

STRIKING BALANCE BETWEEN DREAMS AND REALITY

Further in her mission to provide effective healthcare to people in the country, Mrs. Manju Sharma wants to reach out to people who do not have easy access to good healthcare services. Sensitive to the problems the certain section of society faces, she is planning to build a wonderful legacy for Eternal Hospital that helps economically weaker sections of the society in getting good healthcare. In return to this, Mrs. Sharma is not expecting any accolades or appreciation but a healthier tomorrow where no person is deprived of proper medical facilities and help.

Apart from dedicating herself selflessly to her work, Mrs. Manju Sharma also believes that a person should focus on personal well being as well. That’s why she makes sure that on her way to realizing her dreams, she doesn’t end up harming her own health. Despite her busy schedule, the inspirational woman makes sure she takes some time out for her hobbies including yoga, meditation, and singing. Mrs. Manju Sharma truly shows the essence of a successful person in her myriad personality.