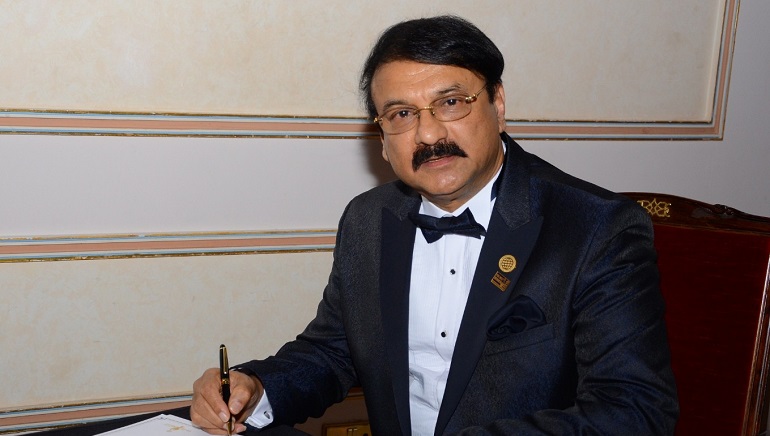 There are many who dream but there are a few who have in it them to turn those dreams into reality. Clarks Exotica’s Managing Director, Mr. Ronald Colaco is one of them. A man with a vision, and an unwavering determination to achieve only the highest pinnacles of success, Mr. Colaco is an inspiration to all the aspiring entrepreneurs out there. His calculated business decisions and his envious understanding of the global market can serve as an example. Adding to his brilliant business acumen is the great philanthropist side that has got him the love and blessings of millions.

Mr. Colaco is revered among his peers for his sharp intellect and hunger to grow continuously. It has only been because of his grit and hard work that Clarks Exotica today is one of the most celebrated hospitality hubs in India. He has nurtured the space with a futuristic vision and has spent extensive time in curating every nook and corner of the space with meticulous detailings.

Having ancestral roots in Moodbidri, Mangaluru, Mr. Ronald Colaco is an NRI businessman based in Dubai. A well-read and well-traveled personality, Mr. Colaco started his professional career in Oman in 1975 as an accountant. Over the next few decades, he worked with some of the biggest companies across eight Gulf and European countries, climbing the hierarchical ladder head of accounts and administration and financial controller.

Mr. Colaco also got the honor of being elevated as commercial CEO for a consortium of 3 multinational corporates that were CCICL based in Greece, Mannesmann of Germany, and Saipem of Italy, which is involved in turn-key projects such as the construction of world-class petro-refineries, gas processing and re-injection plants, townships, and airports.

A competitive employee, he attracted a great amount of respect within his peers and diverse industries with his out-of-thebox business ideas and work ethics. He contributed massively to the growth of all the companies he was associated with and motivated many of his colleagues to follow his footsteps. His legacy is still remembered at these places and people often talk of him as a fine example of a competent leader.

Combining all the learnings he attained over more than three decades from his diverse work portfolio at some of the leading global companies, he took the entrepreneurial route in 2007 by establishing Clarks Exotica Convention Resort & Spa established in the city of Bengaluru. What was then intended to be a five-star clubhouse is one of Bengaluru’s preferred destinations for corporate conventions, weekend getaways, and wedding destinations. The resort has 144 aesthetically designed rooms and suites. Its Ocean Convention Center, spread over 50,000 sq ft, is one of Bengaluru’s largest event spaces. Through his business acumen, hard work, dedication, and disciplined approach, Ronald Colaco has become a successful entrepreneur of great repute.

Mr. Colaco’s contribution to Clarks Exotica’s success and popularity has been massive. To this date, he is very closely involved with the activities at the place and monitors every business decision. His aim is to provide the most memorable and comfortable services to the patrons of Clarks and doesn’t compromise a bit in assuring that. His commitment to his business is worth imitating.

He also maintains a very close and cordial relationship with the staff at Clark and takes special care of their physical and mental well-being. He treats them with utmost respect and is always open to listening to new ideas.

Mr. Ronald Colaco’s commitment doesn’t bar at just business, but he extends it to societal causes as well. He has been very active in promoting socio-cultural, charitable, and philanthropic activities in his endeavor to give back to the society that he has come from, in a big way. He insists that it is pertinent for the privileged to support the needy to set a working balance.

His largesse has benefited the poor and the needy people and various institutions and organizations irrespective of caste, creed, race, religion, and language. He has been a pioneer in providing infrastructure facilities for the benefit of the larger public and has set a precedent for others to follow. Many MNCs and Corporates followed in his footsteps to carry out their corporate social responsibility, resulting in creating essential international standard infrastructure in the State.

One of the most celebrated philanthropic efforts of his has been the donation of a hightech govt school in Bengaluru, last year.

Mr. Colaco has been the recipient of a number of national and international awards in recognition of his charitable and philanthropic activities, as well. His many noteworthy laurels include the prestigious award from the office of The Prime Minister of Australia through CSIA which conferred the “2015 International Recognition Award for Leadership in Service Excellence” at the Australian Service Excellence award ceremony held in Melbourne in 2015, the only person chosen for this prestigious award internationally from among 80 countries. He was also recently awarded as the NRI of the year -2018 by Times Group in Mumbai.

His legacy sets a powerful precedent in the society, narrating an unsaid tale of success and goodwill. A number of young kids see him as their inspiration and will surely grow up to become a great asset to the city’s as well the country’s economy and society.