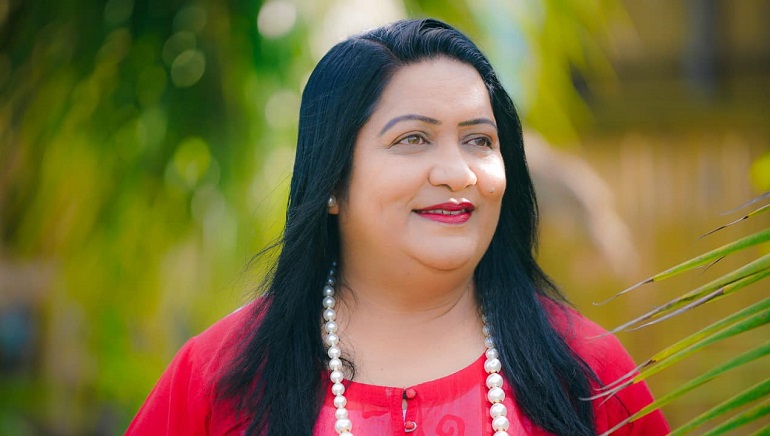 It is a proven fact that environment plays a major role in shaping one’s personality. Ms. Sohani Hossain had a rich upbringing which facilitated her all-round development and nurtured her creative streak. She is not only industrious but also a very creative person and efficiently handles the responsibility of employing around 10,000 people in her corporation – Universal Group – in the capacity of Managing Director. As she herself puts it, “I was born in a cultural family. In my house there were always the magazines, Begum and Chitrali. In my childhood, I was a class Captain and after that I became involved in politics. I protested wrong doings since an early age. When my husband became infected with cancer, my first priority was my employees and as a result of my dedication, Universal Group is where it is today.”

Talking about her Late Father-in-law and husband, who have been a constant source of inspiration for her, especially in the world of business, she says, “I am very fond of these two people in my life. I was beside my husband when he built this corporation. My father-in-law was involved in the cinema hall business. Due to his interest in the cinema hall business, my husband built 21 halls in the northern part of the country. Even I was inspired to make films and I received recognition for them. My husband was in the food industry and pharmaceuticals business. Also, my uncle-in-law was the founder of the first milk based community ‘Milkvita’ in Bangladesh.” She further states, “My husband created ‘Universal Tasty Saline’ thinking of the working class people after a long day at work. We have also worked to popularise ‘Universal Hajmi’ in Bangladesh.”

An Optimist to the Core

Despite having faced various ups and downs in life, Ms. Sohani is an eternal optimist who always sees the proverbial glass as full. Sharing her success mantra, she elaborates, “My life is divided into many parts. In my opinion working against opposition brings success. In my dictionary there is no word such as failure. I keep on persisting until I succeed. I am a cancer survivor. I see the beauty in other people and in other things, and this ability means success to me. I always kept knowledge of cultural activities and events all round the world and I was also a class captain during my school days. I am always working to never be an instrument and to always portray an institution first; this is my story to success.”

Giving her Best for the Welfare of humanity

Ms. Sohani has dealt with social problems decisively and believes that one must adopt a compassionate and humanistic approach for best solutions to world’s social problems. She feels that “by having compassion or a strong feeling of sympathy for other people’s suffering and a desire to help, humans would be able to solve these problems.”

After the demise of her husband Mr. Mobarak Hossain Ratna, despite braving cancer she kept going through her sheer will and determination, and helped every person in difficulty, including the employees of the Universal Group. She paints her own vision for the people and the society. With a view that every human being is equal and possesses the right to have a respectable living, she works for the upliftment of the marginalized people, especially the women who have been abandoned, abused and exposed to drugs, the so-called ‘untouchables’ and the third gender community in society. By including them in societal works, giving them education and by providing them with jobs in her own organisation, she has provided them with the opportunity to live life with dignity and has left no stone unturned to help them return to normal lives. She asserts, “To me everybody is equal and my battle is against the discrimination of people in this society. They are no less than any other employee in my corporation.”

Describing about her inclination towards empowering women, she further adds, “As a woman, I feel responsible for other women. They are my power, my inspiration. My battle is for them.” Talking about the predicament of a former convict whom she employed in her organisation, Ms. Sohani describes, “Due to problems, these women turn to drugs. Everybody criticizes but no one supports them. She is a talented girl and my corporation is for these victims.”

No wonder she is usually referred to as ‘Maa Durga’ at the work front. Elaborating on the reason behind this, Ms. Sohani explains, “Durga means a protector. I believe in equality and promote equality. If anyone asks for my help I try to do so as per my abilities. Perhaps this is why my Universal family knows me as Maa Durga.”

Ms. Sohani’s compassion is not limited to humans as she is an ardent pet-lover as well. Reminiscing about her childhood days, she says, “Dogs and cats were part of my family, I have seen my mother taking food out of her plate and feeding it to the dogs. My compassion started a very early age.”

An innate philanthropist and a popular author, Ms. Sohani has received numerous awards and recognitions for her contribution to the welfare of humanity and her works of art. For her social work, she received the 147th Dadasaheb Phalke Award and the 15th Mother Teresa International Award in India. She has also been awarded by South Korea International Taekwondo Federation. Her works for the 3rd gender community brought her recognition from the 3rd gender people’s shelter in Pabna.

For her contributions as a Bangla songwriter, Ms. Sohani received the Global Music Award in Dubai. She acquired the Achiever Award for the roles in the Bangla Film Industry. She was also recognized as a female film personality in the Khajuraho Film Festival.

For her part in literature, she received the Chokh Sahitya Award in Kolkata. Kolkata’s Pet Wellness Society awarded her with the title of ‘Prani Hitoishi’. She received the Nobochetona Sangskritik Sangathan recognition and was acknowledged by the Bangladesh Cultural Association.

Ms. Sohani has been awarded many times within the country and outside but she regards these recognitions as her country’s achievements. She is of the view that her biggest accomplishment is people’s love and affection for her and not these awards. Extremely passionate about art, she has been consistently writing for more than two decades despite her busy schedule and other obligations.

Ms. Sohani believes that the most essential ingredients for success are “Honesty, unity and dedication.” She adds, “I always dedicate some of my time to God.” Her mantra for success is “making good use of opportunities.” Her strength and resilience are apparent from her never-saydie attitude. She asserts, “I am a warrior. I can swim in deep waters.” Her advice to those who are struggling in life is “Don’t give up; if I can survive cancer then you can survive anything.”

Being extremely positive about the present socioeconomic scenario in Bangladesh, she believes that everybody should contribute at their individual level for the prosperity of the nation. Her optimism and love for her country is quite explicit from her words, “Everybody is doing their own work, the government is working hard to improve the country’s ranking and the individuals are also working hard. Even though there are limitations but there are also possibilities. If everybody works hard together our country and our people can prosper. We have to understand that we are the country, the nation who gave blood for our own language and for our own freedom. If only we have love for our country and commitment towards our country we can help it develop.”