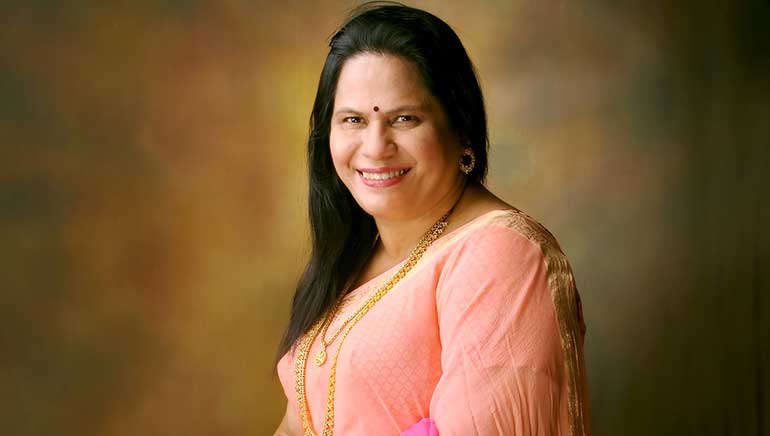 The sheer grit, persistent determination, unceasing passion & assiduous planning of Ms Satya Vadlamani have catapulted into a mammoth pharmaceutical empire – Murli Krishna Pharma Pvt. Ltd. Being the most popular doyenne of the pharmaceutical industry, she has consistently set new benchmarks of success BY RICHA SANG
Toiling hard to follow her dreams, Ms. Satya Vadlamani is an embodiment of passion, perseverance and persistence, who has come a long way in her career. As Chairperson and Managing Director of Murli Krishna Pharma Pvt. Ltd., the magnetic mogul is an inspiration for umpteen women, motivating them to rise high and break the glass ceilings in order to follow their dreams and reach the zenith of success.

Owing to her industriousness, the Company that she established back in 1997 has now transformed into a 7-million-dollar manufacturing firm having 34 molecules, PIC/s Approvals, EU Approval, and Jordanian FDA approval. Her quintessential leadership has enabled Murli Krishna Pharma Pvt. Ltd. to become one of the leading drug delivery systems (DDS) companies in India, providing a range of effective solutions to optimise the delivery of pharmaceutical products. In addition, it has an impressive global presence and its reputed clientele includes Mylan, Sanofi, Helm, Chemo, Stada, Sandoz and more.

Brought up in an intellectually stimulating environment, literally the sprawling IIT Bombay campus, as her father being an IIT professor, and her mother a teacher, Ms Vadlamani always dreamt of becoming an engineer. She pursued a BE in Electrical and Electronics from Gandhi Institute of Management (GITAM) in Vishakhapatnam and took her first step in the pharmaceutical industry in 1992 by joining Armour Chemicals Ltd. as an Export Manager. She also worked at Ajanta Pharma Ltd.; however, she resigned from her job in 1997 to establish Murli Krishna Exports – a pharmaceutical API’s marketing and trading Company.

THE EMPIRE OF DREAMS

Laying the foundation stone of Murli Krishna Pharma Pvt. Ltd., jointly with Dr Vijay Shastri, in 2004, Ms Vadlamani has acted as a reckoning force behind the organization’s success. The company received its first EU Approval in 2007 for a single molecule and was re-audited and approved by the same regulatory body for 7 molecules in 2010. Today, the firm has approvals from the European Union and Jordanian FDA for 20 molecules, which is indeed a magnificent achievement; and to add icing to the cake, it has 4 potential IPR’s and pellets ranging from macro-size to nano particles, and is on a supply agreement with one of the leading generics of the world. In addition, the firm’s Research and Development department is accredited with approval as an R&D House by the Department of Science and Technology, India.

A prominent leader on national as well as international platforms, owing to her exceptional oratory skills and immense intellect, Ms Vadlamani often spellbinds the audience with her enlightening talks. She has been a guest speaker in several events including “Sakal Media Group”, “IBN Lokmat”, “FICCI FLO”, “Transnational Cooperation in Drug Development and Clinical Research” and others. Her influencing story has been selected by the BBC as a part of their documentary on India’s women entrepreneurs, titled “Making Medicine in a Man’s World”, and she has been featured as one of India’s leading female entrepreneurs in a book titled ‘Follow Every Rainbow’ by Ms. Rashmi Bansal. She also holds the credit of giving talks as a Motivational Speaker for various organizations like TIE, FICCI-FLO, Tanishka Forum, IBN, Lokmat, SAKAAL, WISTEM and others.

A lady of strong beliefs and holding a rich experience of more than 22 years, Ms. Vadlamani stresses that “I am a woman first and then an independent woman.” She profoundly states that success has not come easily to her and she has really struggled hard to reach atop the mountain of success. Her tools in this daunting journey were her abilities to take a lot of risks, a very strong mental balance and a never say die attitude – which have collectively worked in her evolution as a dynamic leader within the industry.

She has done everything possible to create the best for her company which she considers as her life and passion and has spent her time wholeheartedly towards its growth. Despite facing many obstacles; yet encountering each one of them with great courage and positivity, Ms. Vadlamani has always believed in doing her best and the success simply followed.

TOWARDS A GLORIOUS FUTURE

According to Ms. Vadlamani, setting up an industry for the first time is one of the toughest tasks, which cannot be taught by any management school. She believes that one needs to work really hard to successfully set up an establishment. Being a person of action rather than words, the success of Murli Krishna Pharma is a live testimony of her earnest efforts. The company has filed DMF’s for most of its products in the US and registrations are in place for the rest, and the Plant has been approved by Major Pharma Companies like Mylan, Sanofi, Dexcel and Pfizer for GMP Compliance. Ms. Vadlamani has set her eyes on more regulatory approvals, better recognition in terms of securing good R&D projects from renowned pharmaceutical companies worldwide and increasing the company’s customer base.

Her dedication and sincere efforts, which resulted in the tremendous escalation of her company, have been recognized at varied levels and numerous platforms. Ms. Vadlamani was awarded as the best Women Entrepreneur by the Meera Kaul Foundation’s WISTEM (Women In Science, Technology, Engineering and Management) held at Dubai on 26th October, 2016 and also became one of the top five finalists in the CPhI Pharma Awards held at Barcelona, Spain on 4th October 2016 in the category CEO of the year. She won “Make in India Emerging Entrepreneur 2016” award in the category of Biotechnology and Pharmaceuticals presented by the India Today Group on 1st July 2016 and Outstanding Leadership Award in the National Awards for Excellence in CSR and Sustainability on 1st September, 2016. She was also selected by the BBC as a part of their documentary on “India’s Women Entrepreneurs Titled – Making Medicine in a Man’s World” which was telecasted in July 2015.