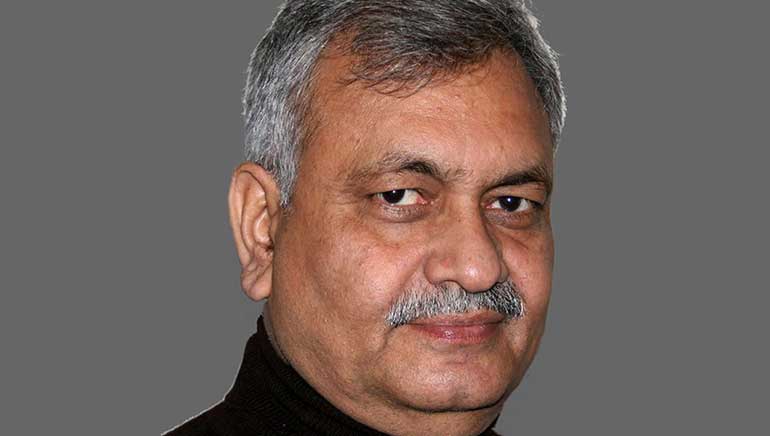 Incessantly nourishing an ambition to play his part in the development of the society, the MD of Ruban Memorial Hospital, Dr Satyajit Kumar Singh’s odyssey, spanning different territories across the globe, has been all about serving the humanity in one way or the other BY RICHA SANG

Forever guided by the leanings of giving back to the society, Dr Singh quit his job of a Consultant Urologist in West Midland, England to pursue his dream of setting up a hospital in his country, India. He set up Ruban Memorial Hospital with a mission of providing quality healthcare services in Bihar at par with multispecialty hospitals in metros with a constant and relentless emphasis on quality, excellence in service and compassion and respect for the individuals. Bent on making Ruban the safest and most prestigious hospital for everyone, Dr Singh aims to provide world-class multi-speciality facilities at affordable cost, promoting superior clinical excellence based on distinctively personalized ethical healthcare practices.

THRIVING ON THE BEDROCK OF VALUES

As an offspring of social activist parents, who were inclined to the left wing political philosophy, Dr Singh was brought up in a middle class family in Patna, Bihar and had always been exposed to a healthy cultural environment. He was inspired by the marital harmony of his parents, who ingrained in him the values of humility and kindness. He received 2 books from his father during his college days, ‘Dr. Kutnish ki Amar Kahani’ and ‘Citadel’. Being the narratives of the protagonists’ dedication and hard work, these left an indelible impression on Dr Singh and motivated him to work hard and reach the zenith of success.

THE EARLY LEANINGS: AN ACTIVIST’S TREK

While pursuing his MBBS from Patna Medical College, the multifaceted Dr Singh donned varied hats and was involved in different social activities; taking keen interest in theatre and even acting as a medical volunteer. Being socially-inclined from the very beginning, he always volunteered for social causes and once he himself arranged a group of medical students and teachers to work in flood affected areas during break out of an epidemic.

Arriving at England in July 1979, Dr Singh started his job from Grantham, East Midland but soon joined in Scotland near Glasgow. After completing his FRCS from Glasgow, Dr Satyajit went on to pursue his MS in Urology from Institute of Urology in London. Even though he had scarce resources to fund his education, his dedication towards his profession and refinement of character won the hearts of all and he was successful in passing the Diploma course in Urology from London University and thereafter joined Belfast City hospital as senior registrar in Urology and transplant surgery in February 1989. Within a year he was offered a job of a Urology Consultant in Chase Farm Hospital in London.

However, consistently nurturing a goal to serve the people of his country, Dr Satyajit was longing to return home & settle in Patna, but his hands were tied due to lack of funds for setting his own practice. Then chance played its part and Dr Satyajit was offered a job from a prestigious Saudi Hospital managed by American Medical institute at more than thrice the salary than what he was getting at London Hospital. He accepted the offer instantly as he required finances to pay back loan which he had borrowed for pursuing his diploma course. Displaying sheer courage and passion for his goal of establishing a hospital in India, Dr Satyajit did not defer from his decision of accepting a job in Middle East even when he received the news of a war between Iraq and Kuwait. Despite enjoying a healthy multicultural environment, he always longed to return to India to materialize his dream of serving the people of his country.

BACK TO INDIA: THE LAND OF DREAMS

Finally returning to India in 1996, Dr Singh joined hands with his brother, Col. A. K. Singh from AFMC for setting up a modern, minimally invasive treatment centre in Patna. Utilizing his hard-earned savings from Saudi Arabia & England, along with some finances from his brother, Dr Singh laid the foundation of Ratna Stone Clinic in Nov., 1996.

In his attempt towards giving back to the society, Dr Singh introduced the technique of laser stone removal, a non-invasive method of stone removal – a concept relatively recent for India and only available in the metropolitan cities, even though it had been prevalent in Europe for more than 10 years. Spreading awareness about this new technique of stone removal, he collaborated with various doctors in Bihar, sharing his experience in this method of treatment and even advertised in Newspapers for this new technique. It was uphill task to convince the patients and doctors alike about the new non-invasive method of treatment, despite being dissuaded by some conventional surgeons against setting up the stone clinic, Dr Singh left no stone unturned to pursue the path of his dreams of setting up his own clinic.

Even though he received a very dismal initial response from the patients & doctors of Patna, but Dr Singh remained composed as the value of perseverance was deeply instilled in him right from his childhood. To support him in this crucial hour, his wife had to mortgage her all ornaments to pay back the overdue loan. However, Dr Singh didn’t lose hope and kept on advertising through pamphlets, newspaper advertisements and even by sending the boys with banners and pamphlets to religious and mela (fairs) gatherings. After initial results of treatment, after more than two years, the hard work of Dr Singh bore fruit and patients started flocking up his clinic through the word-of-mouth publicity.

Receiving overwhelming success in the next couple of years, Dr Singh shifted from a 3 beds’ clinic to a 45 beds’ multi-speciality hospital & Ruban emerged as a renowned brand for the treatment of stones, besides providing Urology & Nephrology facilities. By 2012-13, Ruban had become a popular brand in healthcare but was not providing many specialities hence there was a need for further expansion in the number of beds & specialities. In 2014, Ruban moved to a new premises & expanded to 200 beds with 45 critical beds, 5 modular & 2 non-modular theatres, Cath lab & all radiological as well as laboratory facilities. Presently, the hospital has facilities for open heart surgery, Kidney Transplant, arthroscopy & arthroplasty as well as brain and spinal surgeries apart from the previous routine urology & general surgeries.

Dr Singh is planning to establish a new 500 beds hospital with School of Paramedics. In the first phase, it will have 150 beds with a focus on child & maternity services. The construction will start in the middle of the next year in sprawling 10 acres land in green field area of a suburb of Patna. The brand, Ruban, is expected to provide the best, newer & innovative services in healthcare in Bihar. For Dr Singh, this is a privilege as well as motivation to continue to provide quantity and quality healthcare services.