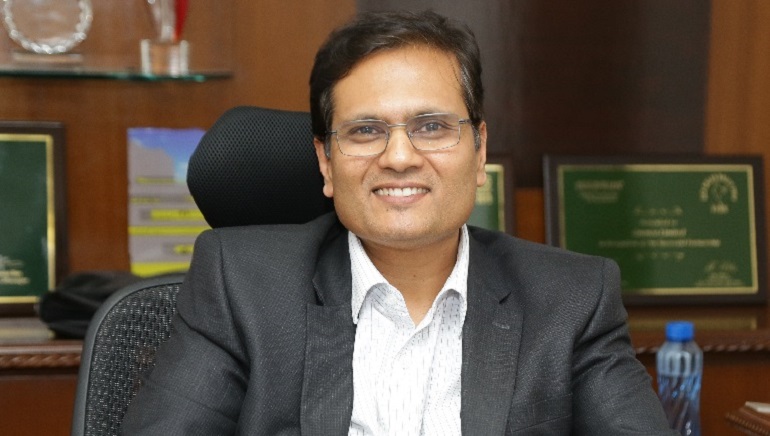 Born into a lower-middle-class family with humble roots, Chandrashekar was willing to make it big for himself from a very young age. He aspired to change his family’s fortunes and he was greatly motivated to achieve this by his mother. She imbibed in him an attitude of winning, not to get bogged down by challenges and failure. She taught him that with no financial support to offer, the only way he could come up in life is by staying focussed, working hard, and being honest and sincere.

A curious student with big dreams, Chandrashekar always remained a topper of his class and completed his graduation in mechanical engineering. During his college days in 1990, he even managed to work on a collaborative project to build a robotic arm. It was considered a revolutionary project as robotics was a novel concept then. It got him immense fame and he read his name being printed in national dailies for the first time, making him believe even more in his dreams.

After graduating from Bangalore University in 1990, Chandrashekar started his career as a shop floor engineer with Larsen and Toubro, assembling earthmoving equipment. After 4 years in the role, he felt that he had to have better exposure if he has to contribute. His life and education were limited to the four walls of the factory. He shifted to sales and marketing and was posted in Kolkata. He further spent a decade in the sales and marketing department and then moved on to executing infrastructure projects of national importance in hydropower, roads, bridges, mining, and other sectors for over 12 years. Through these experiences, he gained tremendous expertise in Project Management, learned the importance of teamwork, sharpened his decisionmaking abilities, and learned to adapt to adversities in challenging ever-changing work environments.

Finally, in April 2019, he took over as the managing director and CEO of Gmmco limited, a C.K. Birla group company. He started working on expanding business profitability. He restructured the organization into business verticals, namely Construction, Surface Mining, Underground Mining, Energy and Transportation and Allied business, with each vertical operating as an independent profit center. He believes in developing leaders as any organization is as good as its leaders.

Chandrashekar reckons that a leader’s biggest strength is one’s team and it is important to nurture, collaborate, and promote the growth of every individual working with him. He completely understands that leadership is not about power or position but about taking responsibility, and therefore, allows people the freedom to operate, communicate transparently, take risks, and celebrate failures. GMMCO has always been an employer providing equal opportunities and Chandrashekar has taken up initiatives to provide opportunities for youngsters with the talent to reach leadership positions. A strong believer in inclusion and diversity, he has made sure that a great gender balance is maintained in his firm. Realizing the importance of technology in modern society, under his leadership, Gmmco implemented SAP, CRM for sales and product support and effectively digitized the complete workforce. Gmmco created applications to enhance support to customers and digitized the inspection of equipment. These applications allowed customers to monitor operations and costs remotely. Gmmco also implemented artificial intelligence to monitor employee engagement and satisfaction under his leadership.

Too much analysis will only lead to paralysis in decision making; with this thought, Chandrashekar makes sure that the workings of GMMCO are maintained raw and organic. He takes more time acting on plans than discussing the roadmaps and that makes him a unique leader. Chandrashekar realizes the importance of Gmmco to be a solutionprovider. The organization has moved away from only selling and supporting equipment to executing prestigious underground coal extraction projects. The company was awarded the largest underground contract for operation and maintenance of longwall equipment for the extraction of coal, on a cost per tonne basis. He has guided Gmmco in the last year to be rated within the top 100 best places to work for by GPTW. The company is rated the best in the infrastructure and construction sector. Chandrashekar has engineered associations with Linnhoff, Sandvik and Maxam to expand the product portfolio. Gmmco is also in advanced stage of discussions for associations with other leading companies in the world.

He is also leading the group’s many CSR ventures as an opportunity to give back to the society he belongs to. He is as passionate about them as the group is. The company’s goals don’t stop with maximization of shareholder value but lie in maximizing the interests of a much wider set of stakeholders that encompasses the owners, employees, customers, environment and the society that they operate in.

The women in Chandrashekar’s life have always been a guiding and nurturing force. While his mother gave him the vision to attain greatness, his wife, Chitra, whom he married in 1992, supported him in achieving success. She has stood with him through thick and thin and has always been there for his growth. A helping hand and a supportive shoulder, Chitra has been a great contributor to Chandrashekar’s beautiful journey. The couple together has two children, Sheetal and Atthin, who are learning a great deal of patience, gratitude, and hard work from their parents. Chandrashekar admits that his family is his greatest strength and with their constant support and encouragement, he is scaling towards newer heights of success, fame, and recognition, every single day.