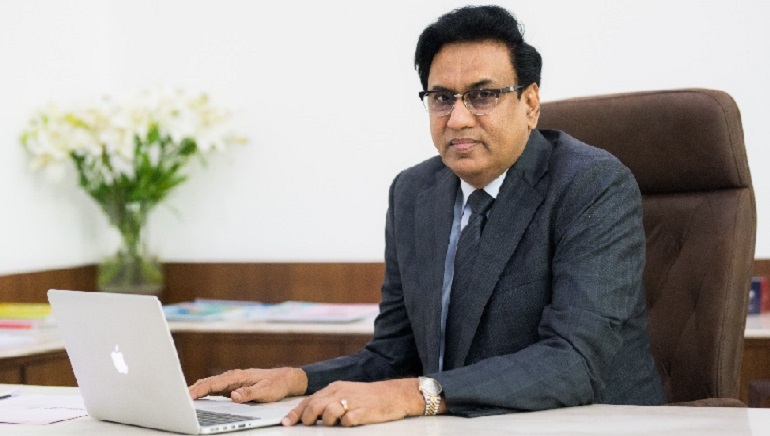 The Chairman of highly successful and reputed institution, Prudence School, Dr. Matharoo is a former civil servant who joined the education sector with a passion for revamping the secondary education system in the country and introducing the holistic way of teaching and culturally relevant curriculum to the education sector.

His aim is to inculcate a relevant learning environment, which is in sync with the evolving global trends and yet engraved in the socio-political realities of a diverse society, which India is.

In his decade-long journey in the sector, the terrific visionary has successfully delivered a responsive model of teaching and learning that is highly relevant and challenges students, parents, and teachers to work and think outside the traditional mindset. He has infused academic rigor by providing individualized support to each student, creating systems that embrace and engage the students and furnishing them with the necessary information, tools, and facilities at every point.

Dr. Matharoo was born and raised in a middle-class family with limited resources. However, with great hard work and determination, he grew out of these circumstances and created his own unique legacy, revered, and celebrated by many today.

Since a very young age, Dr. Matharoo had a great interest in studying and learning about new things. He was one of the brightest students in his batch at a government school and following that he walked the corridors of Delhi University with an inquisitive mind.

A meritorious student, he always inspired his juniors to work hard and study with the aim to learn and not merely get good scores. Further, the genius personality attained his Ph.D. degree in education management from a foreign university, covering an aweinspiring journey.

A self-made person with determination to progress and leave a mark by way of constructive contribution towards the society, he started his career as a civil servant at the Union Ministry of Home Affairs where he held a variety of charges. His tenure in the North East Division of the Ministry was a defining one where he proactively contributed a lot towards the development of the region and bringing control/removal of insurgency in the area.

His seniors were mighty impressed by his outstanding performance and with the display of his executive abilities and therefore deputed him to the Municipal Corporation of Delhi (MCD). He was given the responsibility to introduce a reformed system of functioning for the corporation, which was dealing with a number of messy situations and chronic ailments at that time.

During his tenure at the Municipal Corporation of Delhi (MCD), he introduced Unit Area Method for the purpose of computation of property tax liability of the property owners, bringing in transparency in the system and saving the property owners from harassment at the hands of inspectors. He also led the privatization of toll tax collection at the entry points, thus increasing revenues for MCD. He also brought changes in the procedure for approval of Building Plans for construction. He was harassed and threatened by mafia within the MCD, which was negatively impacted by these reforms. But he remained fearless, bold, and continued serving his duties with full dedication and honesty. Although he emerged victorious and stronger, a sense of disillusionment with the system in him prevented him from continuing in Civil Service and urged him to do something for the society.

SHINING BRIGHT IN THE EDUCATION SECTOR

Dr. Matharoo had a great passion for education and improving its standards within the country ever since. So, around a decade back, he moved on from his duties as a civil servant and ventured into the education sector to which he was enamored from the core of his heart since his young age but was being constrained from doing so after having joined civil services.

He joined as head of an academic institution and contributed tremendously to its growth as uplifter of standards of teaching and bringing an innovate approach in its administration. Eventually, there was a sea change in the schools headed by him where students became very participative and started looking to coming to school as a passion. He dwelt on the overall personality development of the students and emphasized personalized attention on each student to identify his areas interest and strength.

As Head of the Prudence Group of Schools, he challenged conventional wisdom to pioneer dynamic and far-reaching changes through a determined focus on the holistic development of each student. By doing so he was able to infuse academic rigor by providing individualized support to each student, creating systems that embrace and engage the students and provide them with the necessary information, tools, and facilities at every point.

He reckons that it is very necessary to ignite in each student the spirit to stand for oneself and identify their strengths and weaknesses and, therefore, pays a lot of attention on individual skill development. His mission is to make each student a champion in one’s own right and empower them with the right approach to deal with life’s challenges. All the students at his school see him as a father figure and a guiding light who is training them to be the best versions of themselves.

He is very passionate about extending equal opportunities to all and is working hard to make the education system a more equitable and inclusive entity and realizes that leaders like him will have to contribute towards that. He has a vision for free education for poor deserving children. He does not want that poor students who want to study should be deprived of that because of financial constraints. In the near future, he intends to open a world-class school for poor and underprivileged children where free education will be imparted and bright students from poor families would be groomed as the future engine of growth of the country