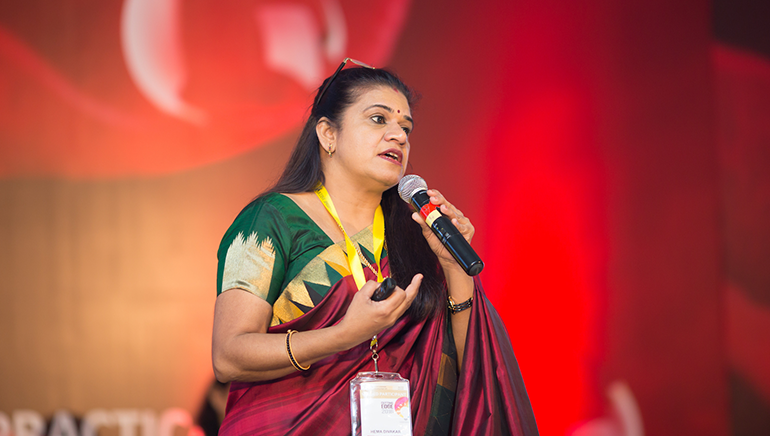 An accomplished specialist in the field of Obgyn care, Dr. Hema Divakar, Medical Director at the Divakars Specialty Hospital in Bangalore has developed her organization as a center of excellence for women’s healthcare and also a center for Skill Enhancement. She is also the CEO and Chairman of ARTIST – Asian Research and Training Institute for Skill Transfer – with research and capacity building activities through onsite and digital platforms.

She is a leading medical professional of India with a vision to improve the healthcare services ecosystem for the welfare of women. She has, over the last three decades, been a game changer in healthcare, establishing new benchmarks, standards and touching women’s lives in the process.

Before initiating her professional journey and then during the course, Dr. Hema has gained several academic achievements such as a Masters in Alternative Medicine, an MD from Wadia Maternity Hospital in Mumbai, a Postgraduate Diploma in Medical Law and Ethics, a Diploma from All India Institute of Management, and a PG Diploma in Preventive and Promotive Healthcare.

She shares, “There is never a dull moment in my life. I studied MBBS at a time when not many girls explored this profession.”

As she realizes that every day, hundreds of women die worldwide because of pregnancy-related health problems, and 99 per cent of these problems occur in developing countries, she has been tirelessly working to improve the women’s healthcare services in India.

Specializing in high-risk pregnancies, she has set up clinics that deal with miscarriages, foetal medicine, and diabetic obstetrics, and to support women and children in rural India she has also founded the Divakars Services Trust. She asserts, “Women’s healthcare is one of the most neglected issues in the country. India has a long way to go in improving the healthcare services for women. We have just made a beginning. There is a lot more to be done and I want to accomplish them with the support of my fraternity and the government backed by policy framework.”

To improve the overall women’s healthcare services in India for long-term results, she has been contributing to nation building in her own capacity. To change the fact that the MMR in India is poorer than that of Bangladesh, she has launched two flagship initiatives: Helping Mothers Survive (HMS) and Save Mothers, which have now been institutionalized in a few states of India.

She says, “It is a fact that whichever country had a healthy population prospered on all fronts. About 30 per cent of India’s population is in the age group of 10–19 years. It is estimated that there are almost 331 million adolescents in India. They represent a resource for the future whose potential has to be nurtured. We have to address major health issues affecting the population of the nation, particularly the womenfolk.”

As she is also a Member of the Technical Advisory Group (TAG) for Ministry of Health and Family Welfare, Government of India, she has contributed not only towards capacity building in the healthcare sector, but also towards policy making regarding the social and legal issues concerning women’s health in India. Her contribution to nation building through determined efforts in the entire healthcare industry is commendable.

Diversifying her expertise, Dr. Hema currently holds an exhaustive list of important positions of great responsibility within the country as well as in Asia: She is a speaker, an activist, technical advisor to Ministry of Health and Family Welfare, Vice Chair of the NCD committee at FIGO- international obgyns, National Coordinator for FIGO FOGSI WDF on Diabetes in Pregnancy, National Co-ordinator for FOGSI MANYATA Quality initiatives, and an adviser at India Institute of Public Health and IIM Bangalore. In the year 2013, she was the PRESIDENT of FOGSI (Federation of Obstetric & Gynecological Societies of India), with 32,000 specialists on roll as the members.

She says, “To head the FOGSI was the high point of my career because the initiatives launched then are policy programmes for some progressive states today. The FOGSI Vision 2022 captures our aspirations and goals to make India a vibrant and healthy nation.”

She regularly contributes to publications and textbooks, and conducts educational workshops all over India.

She has been instrumental in getting March 10 declared as the Gestational Diabetes Mellitus (GDM) Day, the first by any country, as the number of diabetics in India is very high. She explains, “We conducted a survey and our findings revealed that approximately 10 per cent of women, who get pregnant every year, developed diabetes during the gestation period. Even with 10 per cent, the numbers in this country are whopping, as it works out to about three million women every year. This is an alarming trend, which cannot be ignored. From being called Diabetes Capital of the world, we want India to be Diabetes Care Capital of the world.”

Working with the Karnataka Government on several issues through The Asian Research & Training Institute for Skill Transfer (ARTIST), which she started as a premier institute for learning, she has initiated a public-private-partnership with the National Rural Health Mission (NRHM) to adopt and manage the First Referral Units (FRUs), exclusively dedicated for maternal healthcare services, in several economically backward districts of Karnataka.

Further, she has also collaborated with the state government to make 2,00,000 women workers in garment factories of Bengaluru Anaemia-free.

Dr. Hema has been creating waves in the entire Asia for her complete focus on making a positive change in India’s healthcare industry. She shares, “To be recognised with other achievers of Asia thrusts on me a greater responsibility and ownership to reform the women’s healthcare ecosystem in an innovative and impactful manner.”

Her ingenious work in the healthcare industry has received worldwide recognition and praise, as they directly improve the people’s requirements in the healthcare industry of India. She understands and is deeply emotional about the fact that Indian women and children don’t have easy and affordable access to quality healthcare, especially in rural areas. So, she has set out to changing the face of the country’s healthcare sector where it’s most relevant.

Offering speciality services, she has worked on lesser known issues of women, and has catered to basic pre- and postnatal care. Her committed efforts have been recognized well, as she is the only recipient of the Lifetime Achievement Award from the World Diabetes Foundation (Diabetes in Pregnancy Study Group of India) and the fifth Indian woman to receive the prestigious FIGO (International Federation of Gynaecology & Obstetrics) Women Achiever’s Award. She has received the honorary fellowship from the Royal College London, Icons of healthcare Award in Singapore, and even Greatest Leader and Global Asian Awards. The hospital follows the philosophy of Dr. Hema, and like her, every employee at the hospital possesses exemplary determination, expertise in his/her own area of function, and a high consciousness for quality.

Her resolute efforts have resulted in the development of Divakars Speciality Hospital as a center of excellence in women’s healthcare focusing on all age groups, before and beyond pregnancy, offering the complete range of consultative and specialized services to meet the needs of adolescent, reproductive age and postmenopausal women.