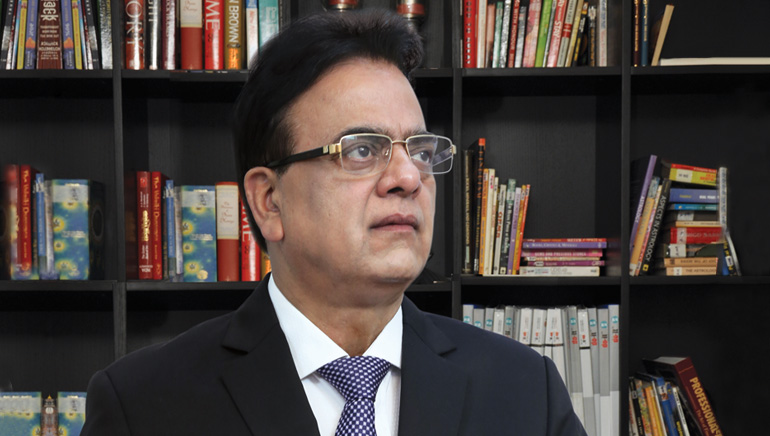 Dr. J. C. Chaudhry is a pioneer who has set benchmarks in the spheres of entrepreneurship and leadership. His work is immensely inspiring and gives everyone a lesson in perseverance, dedication, and patience. Dr. Chaudhry is the man behind one of India’s largest and most successful test preparatory institute –Aakash Educational Services Limited (AESL). After taking it to an absolute pinnacle of success, he sold it to Byju’s last year and is now the Chairman of the entity. He is also a numerologist with an experience of almost 4 decades. Numerology has been a long standing passion for him and in 2018, he decided to start yet another journey. Dr. Chaudhry established Chaudhry Nummero Pvt. Ltd. (CNPL) to give his passion a very meaningful turn. He truly believes that numbers rule our life and favorable numbers attract good luck and success. He set up CNPL to spread this awareness amongst the people and help people achieve the best in their life with the wisdom of Numerology. He has been following his passion for Numerology for a long time but with CNPL he made sure that he shares that skill with others and alleviates people’s problems. He is one of the most famous Numerologists in India.

JOURNEY OF A LIFETIME

Today, Aakash is a name synonymous with the most premium and successful coaching institute in India. It is a brand known for delivering focused and quality coaching and is a leader in the whole paradigm shift that happened in India when it comes to competitive exam coaching. It is all down to Dr. Chaudhry’s persistent hard work and vision that he had for Aakash. Born in 1949 in a small town of Haryana called Hathin, Dr. Chaudhry always dreamt big. His humble beginnings only strengthened his desire to do something grand in life. He focused hard on his studies and completed his Master’s degree in Science (Botany) from the Birla Institute of Technology and Science(BITS), Pilani, Rajasthan in 1972.Soon after completing his studies, he started his professional journey as a teacher at Vaish College, in Bhiwani, Haryana. He taught at the college from 1972-73 and then he moved to New Delhi where he taught at the Hansraj Model School. He then moved to Delhi Administration schools where he became the Principal through the UPSC in 1993. It was during his journey as a teacher that he realized that there was a huge gap in the coaching segment in the country. At the time, coaching centres were not at all known in India and it was an extremely unorganized sector. Dr. Chaudhry saw it as an opportunity to carve his niche and started Aakash in his house with just 12students. In his first batch only, 7 out of 12 students cleared the tests and word spread quickly about his small setup. Rest as they say is history.

THE NEXT BIG LEAP

Dr. Chaudhry has always been known for his commitment to teaching and being a strong pillar of strength for students all across the country. His endeavors all through his life have been to support students who have dreams in their eyes. With more than 33 years of operational experience, he sets an excellent example of how nothing is impossible if you keep working sincerely for it. A motivational speaker, philanthropist, educationist, and powerful orator; he dons many hats and each with equal panache. Next to teaching, he has always had another passion too. He has been interested in Numerology for quite a lot of years. He is intrigued by how numbers and human life are enigmatically interconnected and has always been learning more about it. A few years back he decided that he wants to take it up to a bigger level and spread this knowledge and awareness. For most establishing a giant like Aakash and keeping it consistently on the top for decades is the dream run. But for him, the journey started again when he started CNPL and it took the same trajectory of persistence, success, and reaching the highest pinnacle. This is evident in the fact that Dr. Chaudhry won the 1st-ever Guinness World Record in Numerology and the first world record of 2022. Dr. Chaudhry also has been associated with the fields of Vastu Shastra, Gems and Stones, Nature, and Mudras. He is a well-renowned orator as well as writer. He has authored 2 books on numerology – “Advanced Numerology” & “Prractical Numerology” and 2 books on Vastu – “Fundamentals of Vastu” and “ABC of Vastu Shastra”. His other publications include ‘You and Your Gems’, ‘Meditation’, ‘Chakras’, ‘iThink’, ‘Success A few steps away’, ‘Rungs of the Ladder’, ‘Nature-The Best Cure’ and ‘Mudra-Healthy Life at your Fingertips’. He is a passionate leader who works not only for himself but for everyone associated with him. He aims to take everyone along the path to success. He is a firm believer of Karma and that hard work will bear fruits sooner or later. “I believe in taking quick, instinctive decisions. It is better to cut the cord in life than to endure pain,” Dr. Chaudhry says.

Dr. Chaudhry’s entrepreneurial prowess and business acumen have been recognized far and wide. He has been presented with many awards to honor his diligent work and efforts. He was awarded the most prestigious ‘Dr. S. Radhakrishnan Memorial National Teachers’ Award in 2002 for the services rendered to schools and the community. Some other notable awards include the ‘Person of the Year Award 2015-16’ by AsiaOne at Abu Dhabi; ‘Person of the Year Award and Life Time Achievement’ at India-UAE Business and Social Forum IN 2017; key Note Speaker on ‘Role of Numerology in business growth and personal life’ at the Indo- European Investors Meet 2018 at St. James Court, Taj Hotel, London; ‘Global Education Leaders Award’ for Shaping the Dreams of Millions of Medical & Engineering Aspirants at India UAE Partnership Summit (IUPS) 2018 held at Atlantis, the Palm, Dubai; ‘Dr. APJ Abdul Kalam Award’ by Deshabhimani Charitable Society in October 2019 for his outstanding contribution in the field of Education, Healthcare, Motivational Speech & Writing. His Guinness World Record in Numerology which had the most viewers on his first YouTube Live Session was the first such Guinness World Record. The lessons that can be learned from Dr. Chaudhry range from perseverance to staying relevant through different phases. He ensured that his first venture Aakash stayed relevant throughout the entire time he was at the helm. His second innings as an entrepreneur through CNPL has also been true to this trait. Finding his growth as a renowned Numerologist in a country like India where there is no dearth of astrologers, numerologists and the likes is no easy feat. Dr. Chaudhry is a truly passionate man who knows how to make dreams a reality. “My dream is to put Numerology on the global map.”To realize this dream, Dr. Chaudhry has established the International Numerology Forum (INF) a platform to connect numerologists worldwide. He is also now planning to open an institute –the Indian Institute of Numerology (IIN), which will be an institute of international standards and will produce the world’s finest numerologists. His venture ‘Chaudhry Nummero’ is also undergoing massive global expansion. They have opened the first branch in Dubai and several branches are in the pipeline including NewYork, London, and Australia. Dr. Chaudhry is truly a visionary who has worked tirelessly to transform the world around him. He has taken it upon himself to share the valuable lessons that he has learned all through his life as an academician, entrepreneur, and numerologist to guide the younger generation towards success and empowerment.