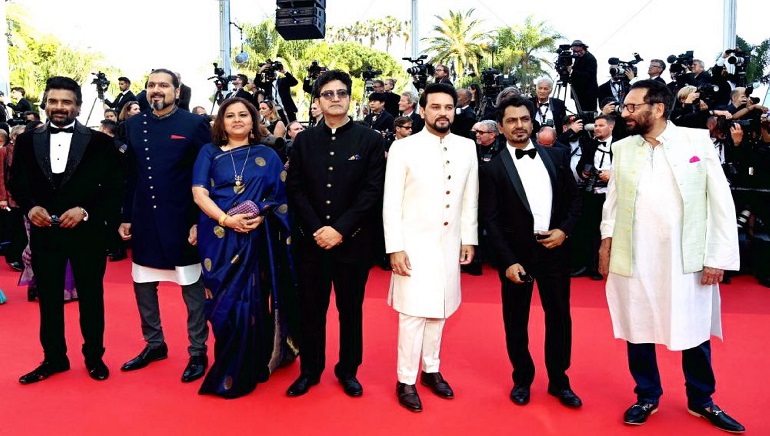 This year the South of France saw the highest number of Indian celebs for one of the most prestigious events in the world, the 75th Cannes Film Festival. India had its largest-ever red carpet contingent at Cannes on an inaugural day, confirming its status as the country’s first-ever march du film “Country of Honour”.

A delegation of eleven Indian celebrities led by Union Minister of Information & Broadcasting Mr Anurag Thakur walked in unity on the first day of the Festival, representing the largest Indian official delegation. This included three of the most renowned musicians on the international stage, as well as filmmakers and actors from the Indian Cinema who are representative of a kaleidoscope of diversity in various regions, languages, and mainstream and OTT-led films.

This year actress Deepika Padukone hasn’t returned to Cannes as an attendee but as a jury member. Nawazuddin Siddiqui, Pooja Hegde, Tamannah Bhatia, R Madhavan, and AR Rehman were also part of the delegation.

The festival will take place from May 17th to 28th 2022 where Indian delegations will take part in various events and high-level meetings.

Akshay Kumar too was a part of the official delegation but opted out after he tested positive for Covid-19.