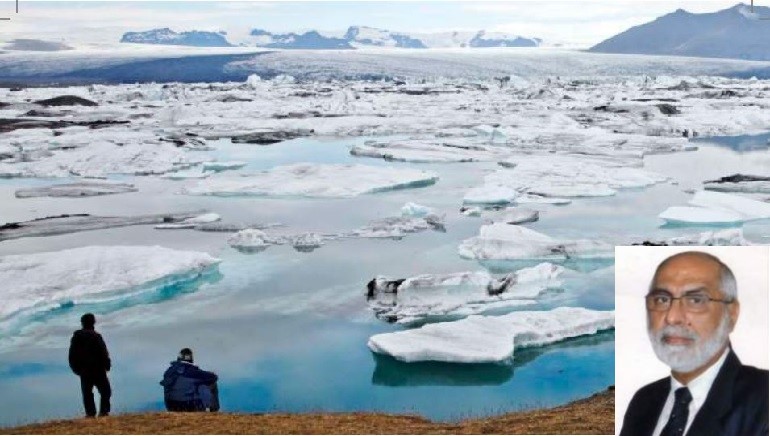 A Unique Land of God’s Fancies

A land loved by all who live and travel to the country, owing to various extremes yet holding a fine balance between sundry aspects of geography, climate, food, music and literature, Iceland also holds a promise of utmost excitement and adventure, as anyone setting foot in Iceland would surely fall for Glacier Hiking, Ice Climbing, Snorkeling, White Water Rafting, Mountain Hiking, Cave Tours, Soaking in Geothermal Pools and Whale Watching.

By His Excellency Mr. Gudmundur Arni Stefansson, Ambassador of Iceland in India

I celand is world-famous for several reasons. And, its picturesque landscape with drastic cliffs, black beaches and spectacular waterfalls isn’t the only one or the most important of them. It is the safest country in the world and the only safety measures and precautions one needs to take while in Iceland are due to its rough nature and unpredictable weather.

Iceland is an island in the North Atlantic. It is home to a progressive and peaceful nation that has formed a modern society where freedom and equality are held in high regard. Iceland continuously ranks at the top for measurements of quality of life, gender equality, and democracy. Iceland is a country of extreme geological contrasts. Widely known as ‘The Land of Fire and Ice’, it is home to some of the largest glaciers in Europe, and some of the world’s most active volcanoes. Iceland is also the land of light and darkness. Long summer days with nearly 24 hours of sunshine are offset by short winter days with only a few hours of daylight. Uniqueness of Iceland lies in its unspolit nature and the fact that it has a small population of 3,50,000 people. Iceland is full of exciting activities and breathtaking landscapes. You can witness geysers, waterfalls, glaciers, volcanoes, valleys and endless stretches of black sandy beaches. For activities, you can go hiking, biking, snowmobiling, kayaking or you may just soak up the warmth of a natural hot spring. The options are endless! Some experiences can only be enjoyed in the summertime others only in wintertime and some all year long. Seeing the Northern lights is on the bucket list of many people and Iceland is an excellent location to witness that as it is surely a unique experience.

We are actively promoting tourism in India through various activities including shooting of Indian films in Iceland. To cater to the needs of the growing tourists from India, the Embassy has started issuing visas in Delhi, Mumbai and Bangalore through VFS Global directly. We also plan to extend visa application services to other cities soon. India and Iceland are top fishing nations exporting large amount of fish and seafood across the globe. The two nations have renewed the MoU on sustainable fisheries cooperation in September 2019 during the State visit of President Ramnath Kovind to Iceland. To encourage people-to-people contact through arts and culture, a new MoU on Culture was signed during the visit of President Ramnath Kovind to Iceland in September 2019. A visa agreement was signed between Iceland and India in September 2019 which will allow officials from both sides to travel without a visa. We focus the work of the Embassy on a few key areas. Promoting tourism to Iceland has been very successful. We have had a yearly 50% increase in the number of tourists travelling to Iceland. The Indian film industry has also showed much interest in Iceland. The biggest success is Gerua the feature song of the Bollywood movie Dilwale, which received some 200 million views on Youtube. Iceland is primarily a food exporting country. It exports fish and lamb. India is not a classic market for Iceland. India has turned to be a more high-tech connection for Iceland rather than a traditional export market. Thus, other focus areas include business opportunities in targeted high-tech areas such as renewable energy, in particular geothermal energy and hydropower, biotechnology, information technology, and environmental technologies. Iceland’s start-up industry is also fast growing and provides an attractive market especially in cutting-edge sectors like digital technology and biotechnology.

I believe that under the leadership of Prime Minister Narendra Modi and the recent visit of your President Shri Ram Nath Kovind clearly indicates that there is interest and potentitial for both countries to collaborate for partenership in Geothermal energy. I also believe that India and Iceland have tremendous potential to grow politically, culturally and socially in the next decade – India being the world’s largest democratic country and Iceland the oldest one!