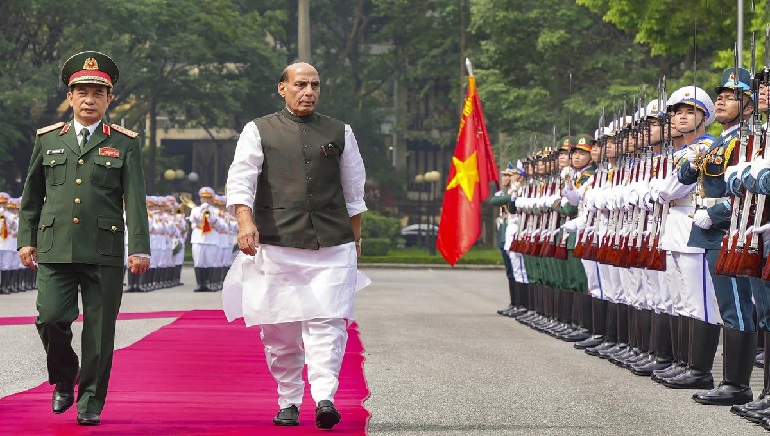 The defence minister of India Rajnath Singh who is currently in Vietnam signed a Memorandum of Understanding (MoU) on mutual logistics support with his Vietnamese counterpart General Phan Van Giang on Wednesday.

The Defence Ministers signed the ‘Joint Vision Statement on India-Vietnam Defence Partnership towards 2030’, which will greatly boost the possibilities and scale of existing defence cooperation, the Defence Ministry said in a statement. It added that this would be a major step to make easy the procedures for logistic support that would benefit both countries, especially now when the cooperative engagements between both countries are augmented. The logistics support pact will also allow the militaries of both sides to use each other’s bases for mending and re-stocking supplies.

Mr. Singh began his official visit by paying respects to late President Ho Chi Minh at his Mausoleum in Hanoi. He said on Twitter after the meeting with his Vietnamese counterpart that he had an “excellent meeting” where they discussed constructive and practical resourcefulness to increase the bilateral defence engagements and regional and international issues. India has also shared a Comprehensive Strategic Partnership with the South-East Asian country since 2016 and defence cooperation plays a vital role in this partnership.

India signed its first logistics agreements with the U.S in 2016 and thereafter with all Quad countries, France, Singapore, and South Korea.