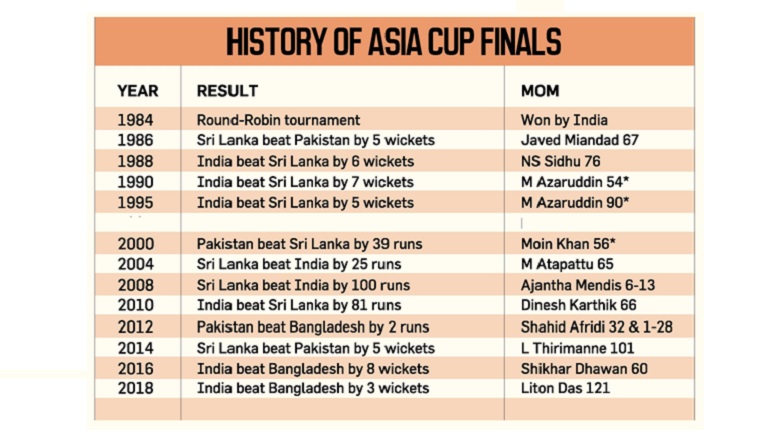 In a successful, thrilling run chase, India beat Bangladesh by three wickets, and bagged the Asia Cup 2018, in the final of an extraordinary tournament. The Indian cricket team successfully secured their Asia Cup trophy by defeating worn-out Bangladesh cricket team in the tournament finals.

India, after winning the toss, elected fielding. Bangladesh openers played some outstanding strokes and gave a good start for their team. Liton Das, who scored his maiden 121 runs off 117 balls before being stumped by Dhoni, made a valuable contribution in runs, including 12 fours and 2 sixes, partnering with Mehidy Hasan Miraz. Despite the good start by Das and Miraz, the Bangladesh team’s middle order tumbled and lost their crucial three wickets in just 31 runs. Owing to the batting collapse, Bangladesh lost 10 wickets for 102 runs, and their innings lasted 48.3 overs.

Kuldeep Jadhav was very effective in his spell of 45 runs in 9 overs, and gave a lurch to the Bangladeshi team by nabbing three wickets. After a great start from Indian openers, India managed to restrain Bangladesh to just 222. In all, Bangladesh team put up a great show and won the hearts of true cricket lovers all over the world. In the run chasing of 223, Rohit Sharma’s magnificent 48, together with some outstanding knocks from MS Dhoni, Dinesh Karthik, Ravindra Jadeja and Bhuvneshwar Kumar made

India win off in a nail-biting last ball happenstance.