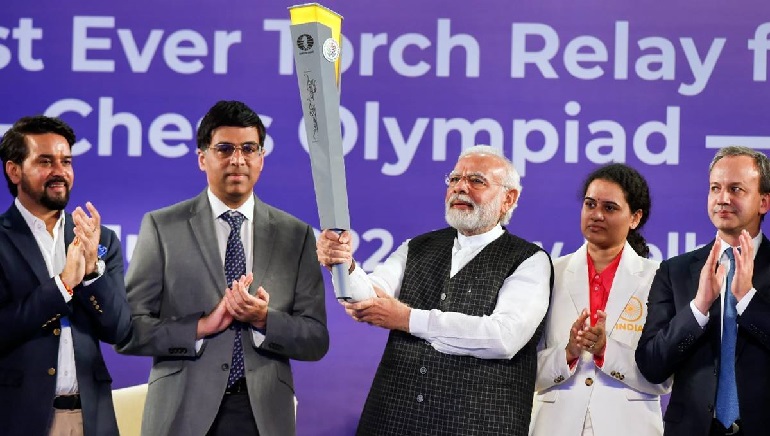 In a historic event, Indian Prime Minister Narendra Modi on Sunday flagged off the first-ever torch relay for the Chess Olympiad, which is to be held in Mahabalipuram, from July 28 to August 10.

The international chess body, FIDE, introduced the torch relay for the first time, which has been a part of the Olympic tradition but was never practiced in the Chess Olympiad. FIDE President Arkady Dvorkovich gave the torch to the prime minister, who handed it over to the famed Chess master Viswanathan Anand.

The torch will arrive at Mahabalipuram, after being taken to 75 cities in 40 days, where the chess grandmasters of each state will receive the torch. Some of these cities are Leh, Srinagar, Gangtok, Jaipur, Surat, Bhopal, Patna, Kolkata, Mumbai, Hyderabad, Bengaluru, Thrissur, Port Blair, and Kanyakumari.

In nearly 100 years of the history of this distinguished event, it’s the first time that India will host the chess Olympiad. With 188 countries taking part in the tournament, India is ready to witness a huge gathering of countries on its soil.

PM Modi stated, “We are proud that the sport rose from its birthplace and has made its presence felt all over the world. We are delighted to see chess return to its birthplace and celebrate its success in the form of the Chess Olympiad”.