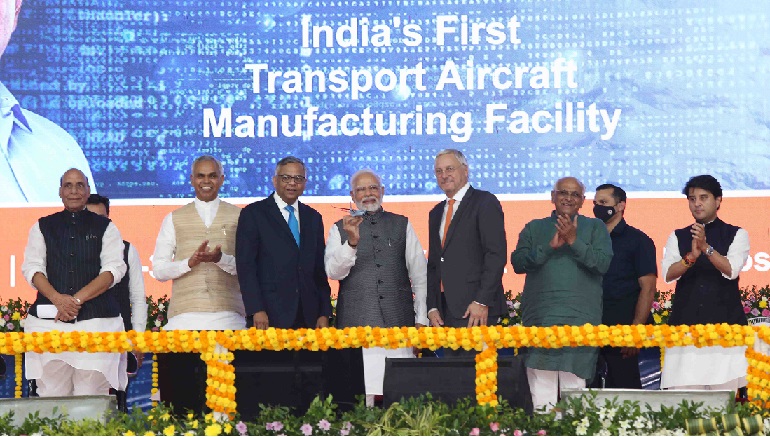 Prime Minister Narendra Modi laid the foundation stone for the C-295 transport aircraft manufacturing facility at Vadodara, Gujarat, on October 30, 2022. The facility will be set up by Tata Advanced Systems Ltd (TASL) and Airbus Defence and Space. The C-295 will replace the Avro aircraft in service with IAF.

The joint venture between Airbus and TASL will manufacture 40 C-295 military transport planes at the new facility as part of a Rs.22,000 crore deal to supply 56 aircraft. The other 16 planes will be supplied by Airbus from Spain. In addition to 40 aircraft, the facility at Vadodara would be manufacturing additional aircraft for Air Force requirements and exports.

Speaking at the occasion, the Prime Minister called the aircraft manufacturing facility India’s giant leap towards becoming self-reliant in the aviation sector. He said that India is going to be a major hub for building large aircraft, both passenger and cargo planes.

With the launch of the C295 aircraft manufacturing facility, India will join countries like the US, the UK, Japan, Russia, France, Italy, Spain, Ukraine, Brazil and China, who have the capacity to manufacture military transport aircraft.