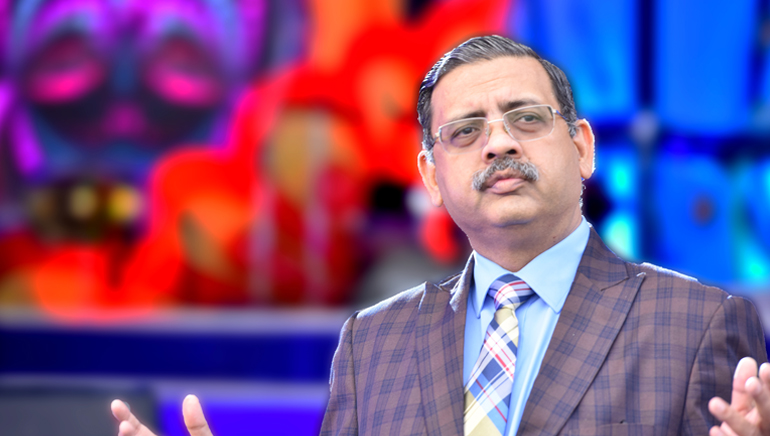 Mr. Rabindra Narayan is a graduate in English literature, and has completed his diploma in Journalism and Marketing. Theatre has played a significant factor in his life. He has been a popular theatre artist right from his college days, and has shared the stage with several renowned stage personalities. As the General Secretary with the Delhi-based Collegiate Drama Society, he made significant contributions to the field of Punjabi theatre.

Mr. Narayan is also a renowned journalist who worked as the Culture Editor with Sunday Mail in the late 80s. He was also the Acting Editor with The Weekly Sun in the early 90s. Additionally, he worked as a film and music critic during his stint in newspapers. What’s more, he has also directed a lot of documentaries for Doordarshan.

A FOUNTAIN OF CREATIVITY

Mr. Rabindra Narayan is an immensely creative person who is an expert in ideating interesting and engaging content for entertaining viewers. His dedication, combined with his team spirit, makes him a pioneer in the field of Punjabi television and media. Mr. Narayan’s greatest achievement was the creation of the first Punjabi multimedia stage show – Aazadi De Taraaney, for commemorating the 50 years of Indian Independence. In the late 90s, when Mr. Narayan was the business head of ZEE Punjabi and Alpha ETC Punjabi, he laid the foundation of ETC Punjabi.

Thanks to the efforts of Mr. Narayan who has been successfully serving the cause of Punjab, Punjabi, and Punjabiyat by offering comprehensive entertainment for people of different ages, currently, PTC Network enjoys an 80% market share, both in terms of viewership and revenue. It has more than 350 employees consisting of top notch media talents and four state-of-the-art studios.

Under Mr. Narayan’s able leadership, the PTC Network has become the world’s most preferred and largest Punjabi Television Network. With his hard work and dedication, he has expanded PTC Network’s base to the USA, the UK, Australia, Europe, New Zealand, and Canada.

In November 2019, Mr. Narayan launched the world’s first Virtual Reality 360-degree Live Telecast Service to enable his global viewers to watch the live telecast of Gurbani from Sri Darbar Sahib through VR Gear. The VR based technology aims at wowing the viewers by making them feel as if they are physically present inside the holy premises of Sri Darbar Sahib. Viewers can avail of this spiritual experience on their smartphones through the PTC Play app or Jio TV.

Owing to his dedicated efforts and unswerving focus, Mr. Narayan has added several feathers on his cap through these years. He has been honoured with the prestigious ‘Delhi State Punjabi Media Award in the year 2003 by the Delhi Government. Recently, he received the Jewel of Punjab Honor from the ex-Prime Minister of India, Shri Manmohan Singh.