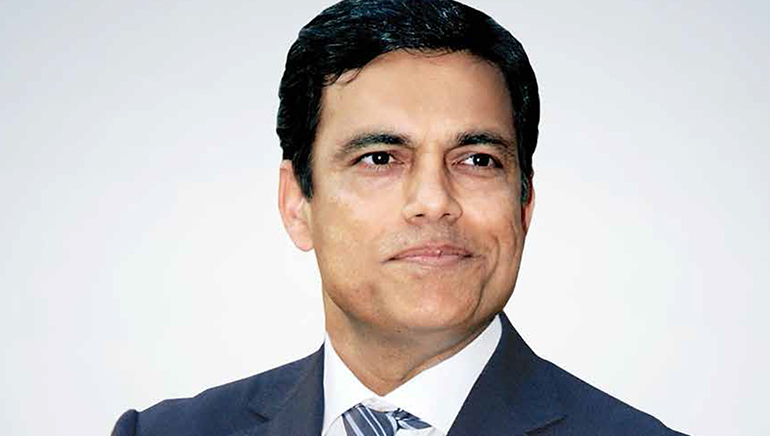 All dreams are made of a magical concoction whose ingredients comprise passion, grit and an insurmountable determination to work hard and win against all odds. Sajjan Jindal inherited this magical concoction and chiseling his dreams, developed one of India’s leading business houses, with a workforce of over 40,000. Diversifying his Group gradually to master other verticals, he forayed into cement, infrastructure, energy and so on, with a dream to help build a new nation.

He and his brothers, Prithviraj, Ratan and Naveen, each run their own businesses that were primarily inherited from their father. Married to Sangita Jindal, who is the Chairperson of JSW Foundation, they have two daughters, Tarini and Tanvi, and a son, Parth.

He holds B.E. in Mechanical Engineering from M S Ramaiah Institute of Technology, Bangalore being affiliated from Visvesvaraya Technological University, Belgaum, Karnataka. Joining the family business right after his graduation, he moved to Mumbai to look after the western region operations of O.P. Jindal Group in 1983. He promoted Jindal Iron and Steel Company Ltd. (JISCO), for manufacturing of Cold Rolled and Galvanized Sheet Products in 1989, promoted Jindal Vijaynagar Steel Ltd. (JVSL), JSW Energy Ltd. (JSWEL), Jindal Praxiar Oxygen Ltd. (JPOCL) and Vijaynagar Minerals Private Ltd. (VMPL) to ensure complete integration of the manufacturing progress in 1995. In 2005, he merged JISCO and JVSL to form JSW Steel; their holdings group has the same name, JSW.

Commanding one of India’s fastest growing conglomerates, JSW Group which is a USD 13 billion company and an integral part of the O. P. Jindal Group, Sajjan Jindal has developed some of the major projects in India and has played a key role in nation building.

He asserts, “We pursue growth zealously. In the face of all challenges, the most effective way to overcome them was to grow. Faster than the market, bigger than the competition.”

Guiding JSW to become one of India’s top business houses, his innovative and sustainable ideas have helped all verticals of the Group: Steel, Energy, Cement and Infrastructure. Believing in creating values of the highest order, he has invariably focused on creating superior strength of products & services, a differentiated product mix, state-of-the-art technology, and then excellence in execution and focus on sustainability for assured success and growth.

Like all great leaders, he too initiated with small steps and a humble beginning in the steel sector of India; however, with consistent efforts guided his Group to expand its presence across India, South America, South Africa and Europe.

He reminisces, “Big rewards never came without the big risks. But not reckless ones! We had the remarkable ability to take measured but worthwhile risks, to go down uncharted territory knowing very well what could go wrong – and being prepared for it!”

Under his charismatic leadership, JSW has always been the strategic first mover to venture away from status quo, have the conviction to make fundamental changes and drive operational excellence on its quest to become better every day.

He shares, “Bettering ourselves helps us make ‘better’ happen for everyone else. We help ‘better’ happen for all the lives we touch – that means our employees, our business associates, our customers and the communities around the plants and facilities and the industry fraternity at large.” Learning immensely from his parents, as he is a secondgeneration entrepreneur, and having already proved himself as an accomplished business leader, Sajjan Jindal has been instrumental in building national infrastructure in sync with national philosophy of growth.

Firmly believing in the Make in India philosophy, he has taken care that JSW should not be recognized as a mere billion-dollar conglomerate, but should develop as a mark of trust and quality that millions of customers around the world depend on, and all stakeholders and the citizens of India must understand that it is a responsible partner in India’s progress.

He has received the Willy Korf/Ken Iverson Steel Vision Award for his contribution to the steel industry, the Outstanding Business Leader of the year 2018 award, CEO of the Year award, JRD Tata Award for Excellence in Corporate Leadership in Metallurgical industry, National Metallurgist Award in Industry category instituted by the Ministry of Steel, Government of India, Best CEO award, and several other prestigious national and international awards.

An ex-President of the Associated Chamber of Commerce and Industry of India (ASSOCHAM), he is a renowned and respected practitioner of sustainable business practices, and holds several other prestigious positions such as Member of the Executive Committee of the World Steel Association (WSA), President of Indian Steel Association (ISA), Council Member of the Indian
Institute of Metals, as well as the former President of the Institute of Steel Development & Growth (INSDAG).

Taking an active interest in CSR projects, Sajjan Jindal has ensured to participate in and initiate activities that assist in improving those areas of India that lack resources. Together with his better half, Sangita Jindal, he has committedly given back to the society in his bid to improve as many lives as possible through the JSW Foundation, focusing on providing the means to empower individuals to bridge the socio-economic divide and contribute to the creation of a more equitable and sustainable community. The Foundation is proud to have touched the lives of over 1 million people by providing them with opportunities for a bright and sustainable future.

Bringing positive transformation to every life his Group or his Foundation touches, he is building, then transforming and then earnestly giving back. Following his personal philosophy, his Group’s every activity is centered on building something new or bettering something that already exists.

Always eager to act beyond just business responsibilities, or fulfilling customer obligations, his professional and personal actions unfailingly positively impact the lives of his business associates, his customers, his employees, and, of course, the communities that he serves through his Group and the Foundation, and then the nations in which he operates.

These are extraordinary achievements when seen in the light of his efforts which are remarkably targeted towards prosperity of the society by building world-class infrastructure, creating inventive solutions, deploying world-class capabilities, and empowering people.