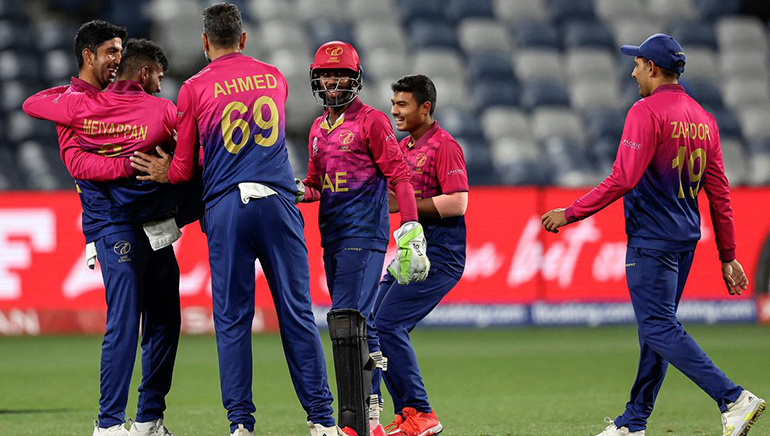 The final Group A match of the ongoing T20 World Cup was at Simonds Stadium, Geelong. After opting to bat first, UAE posted a competitive total on the board after Muhammad Waseem scored 50 runs off 41 deliveries and skipper Chundangapoyil Rizwan hit 43 runs off 29 deliveries.

The United Arab Emirates bowled their best game against Namibia as they had nothing to lose. The UAE let a four-wicket lead slip after 13 overs, putting Namibia in a worrying position. The last over bowled by Muhammad Waseem against Wiese, however, ensured Namibia’s elimination.

A few early blows were dealt to Namibia in their chase for 149. Namibia’s middle order failed to step up in this game that they had to win, and as a result, they were unable to get going. The team was on the cusp of defeat when the score reached 69-7. After this, David Wiese and Ruben Trumpelmann revived Namibia’s innings with a stand of 70 runs, the highest 8th wicket stand in T20 World Cup history. Namibia tried their best; however, in the end, it wasn’t meant to be.

The UAE’s win over Namibia kept both sides on two points each, and the Netherlands moved into the Super 12s after Sri Lanka, who topped Group A with four points.