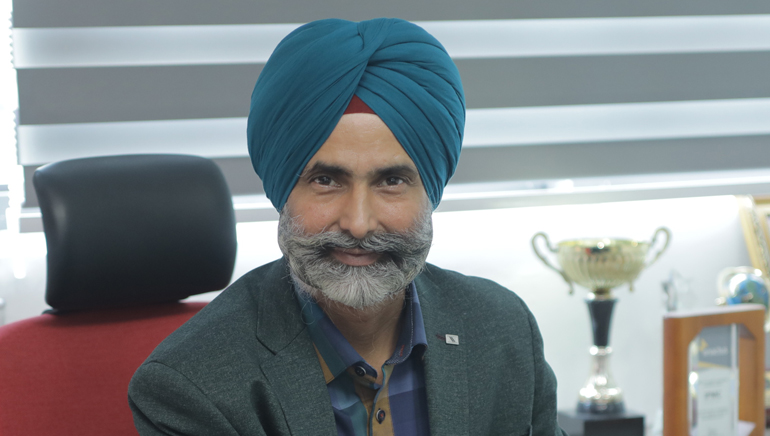 Born and raised in a middle-class family in Chandigarh, India, he lived most of his life in Africa. During the late 1980s, the 18-year-old Mr. Hari made an unimaginable journey away from his hometown, leaving behind the comforts of his home in India for the rugged terrains of a far-away place. His belief in himself and the mentorship of his elder brother, who worked in Liberia (a country in West Africa), enabled him to withstand the storms his joint family went through in the years that followed.

Thus, he set off for Liberia, driven by the desire to succeed. Since it was too early for him to settle on a career path, doing whatever came his way seemed the best option. Therefore, with the support of his elder brother and sister-in-law, he first got into the entertainment industry. He started with a video library and later expanded to include a movie theatre, a discotheque, a casino, and a fast-food outlet. Unfortunately, Lady Luck did not favour him; consequently, he and his family were forced to leave everything behind during the Liberian civil war of the early 1990s and return to India.

An epitome of perseverance, passion, determination, and fearlessness, Mr. Hari is known for his indefatigable spirit. The traumatic experience of becoming financially unstable after several years of hard work did not shatter him. Instead, he faced the situation fearlessly. After returning to India, he spent the next two years learning new skills, from mending electronic devices to mastering software programming at a time when the IT industry was still in its infancy.

While undergoing long periods of unemployment and uncertainty, one thing that remained constant was his faith in the Almighty that his mother had nurtured in him from early childhood. This faith led to a vision of the West African map with Ghana standing out to him early one morning. In 1992, Mr. Hari moved to Ghana with his elder brother and set up an IT company called IPMC. Despite being one of the first countries in the world to abolish customs duties on computers and to declare tax holidays for IT businesses, the acceptance of automation by enterprises in Ghana was still a long way off. In the early days, Mr. Hari tried convincing customers door-to-door to buy the PCs he assembled personally. During this time, he also developed the first accounting software called ‘Account Manager’ exclusively for Ghanaian businesses, which remained the best seller for several years.

In addition to making IT gadgets and software freely available in Ghana, IPMC’s initiative to promote IT skills among Ghanaians and people from neighbouring countries led the company to become a household name in the West African region. Mr. Hari is one of those entrepreneurs who recognised the potential of this region and its people long before others.

Due to his unwavering efforts, IPMC has evolved into one of Africa’s largest IT companies specialising in data centre consulting, business analytics, IT service management, and more. The company is a major distributor of IT products for multinational corporations such as HP, IBM, DELL, EMC, MICROSOFT, and CISCO. Presently, it has over 25 offices in five West African countries, viz., Ghana, Nigeria, the Ivory Coast, Liberia, and Sierra Leone, and employs over 750 IT specialists. Mr. Hari asserts, “Both private and public education institutions must seek out ways to expand the IT sector, and the skills required to do so. The country lacks IT training centres, but even more so than quantity, we need quality IT education institutions today.” To that end, he has established IPMC’s College of Technology and IT Learning centres to offer computer science engineering and IT skills development programmes through the STEM initiative. With its franchise program, plus more than 27 IT learning centres and the college of technology, IPMC offers IT training to over 20,000 students a year. Over the past three decades, IPMC’s College of Technology has trained over 2 million people creating a technologically skilled and digitally empowered labour force across West Africa, especially in Ghana.

Mr. Hari staunchly follows the Sikh faith with solid principles of service to humanity. Born into a family devoted to service before self, the Ghana-based Punjabi entrepreneur pursues a humble but vital role in the larger scheme of things for building a better world for all. Whether it’s organising cultural events, adopting an orphanage, starting programmes for women’s empowerment in far-flung locales, creating response strategies for outbreaks like Ebola or COVID-19, or raising money for cancer genomics research in Canada, Mr. Hari and his entire family are constantly at the forefront of community outreach initiatives.

Despite having a flourishing business overseas, he is deeply connected to his roots. Recently, he addressed the gathering of all office bearers of Punjabi Sahitya Academy, Ludhiana, calling on them to promote Punjabi, their mother tongue. According to him, it is a moral duty that needs to be carried out by Punjabis themselves, including those living abroad.

IPMC has been honoured with numerous prestigious accolades globally, including various national awards from the President of Ghana. His Royal Majesty Otumfuo Osei Tutu II Asantehene, the King of the Ashanti people of Ghana, recently bestowed the renowned Millennium Excellence award upon him, illustrating the gravity of his contributions.

He is an accomplished writer and singer and loves to play different musical instruments. He is also a dedicated art event host and has hosted various live performances.

In 2021, following the drastic second surge of Covid-19 cases in India and shortage of oxygen, he rallied Ghanaians for a brotherly gesture to India and organized shipping of 150 medical grade oxygen concentrators which was shared among 30 health facilities in rural areas across 14 states.