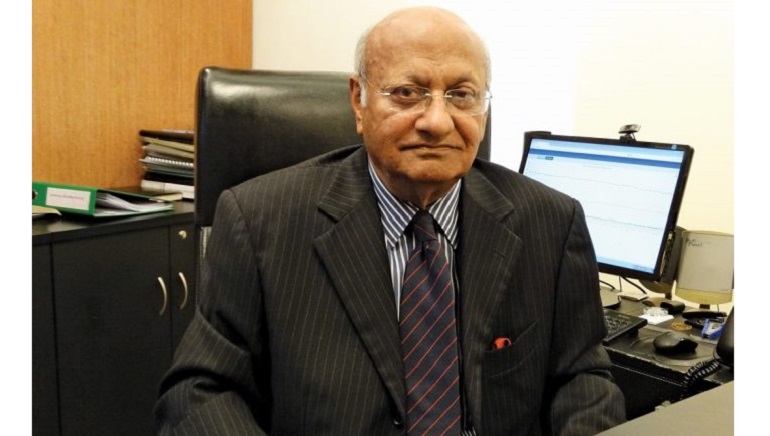 Mr. M. Anis Ud Dowla who is the longest serving professional in Bangladesh is endowed with remarkable leadership proficiency. His eminent leadership has made ACI an organization that is much respected by the authorities, trusted by its consumers and admired by its employees. Being the Chairman of ACI Ltd. since 1995, Mr. Ud Dowla has a rich body of experience and a wide-scoped perspective which pans across nations.

He obtained his Masters in Public Administration from the University of Karachi in 1959. His work with the British Oxygen Group of UK in Pakistan, Bangladesh and Kenya for 27 years has established him as well-learned individual. His work also includes serving 12 years as the Managing Director of Bangladesh Oxygen Limited.

He set off as the Group Managing Director of three ICI companies in Bangladesh. When the companies were divested in 1992, Mr. M. Anis Ud Dowla purchased the controlling interest in the companies. He re-named it as Advanced Chemical Industries Limited (ACI Ltd.) after which he brought about the conversion of ACI into a Public Limited Company to get it enlisted with the Dhaka and Chittagong Stock Exchanges. He righteously shoulders the Directorship Position in all the subsidiary and associate companies of ACI Limited. He is also the Director of Credit Rating Agency of Bangladesh Ltd. and Pioneer Insurance Company Limited.

Having served as the President of Bangladesh Employers Forum for a long time, Mr. Ud Dowla’s contributions to the field of industrial relations are commendable. He has also been instrumental as a member of the Committee in preparing the Labor Code 1996. Being the member of the Tripartite Consultative Committee on Labor currently, he compentently represents the employers’ perspective on all matters of labor at the national level. Mr. Ud Dowla is additionally a Trustee of Independent University of Bangladesh (IUB).

ACI Limited was the first ever amongst the 6 companies which adopted UN Global Compact Principles in 2003. Mr Ud Dowla has not only diligently brought about extensive growth and expansion of ACI but has also retained its multinational vision. The ACI Group is now a diversified conglomerate with 2 public listed companies and 18 subsidiaries. ACI has more than 65 retail chain stores in Dhaka, Chittagong and Sylhet and is the country’s largest retailer. ACI is one of the leading pharmaceutical companies as well. It also takes pride as the largest integrated agro-business to cover fertilizers, seeds, pest control, animal medicines and feeds along with sophisticated farming equipment. With his vision of an independent Bangladesh, Mr. Ud Dowla strives to see a revolution in the areas of agricultural production. He aspires to elevate and develop the standards of living of the common man. His plans to provide employment for all aim at empowering the people and provide them a dignified life.

Mr. M. Anis Ud Dowla has led various delegations at international forums and has been an invitee to the World Economic Forum at Davos and UN Conference on Least Developed Nations. In the year 2011, he was invited to Davos (Switzerland) by the UN Global Compact Office to participate in a discussion on ‘Blueprint of Corporate Sustainability Leadership’. He has received the ‘Best Entrepreneur Award 2011’ from DHL Express. Under his leadership, ACI Ltd. received the ‘Most Respected Company Award for Outstanding Performance in Agro-Based Industry 2013’ from Business Asia.

Mr. Ud Dowla along with the 16000 employees of ACI Ltd. is racing ahead with a mission of prosperity for Bangladesh and its people.