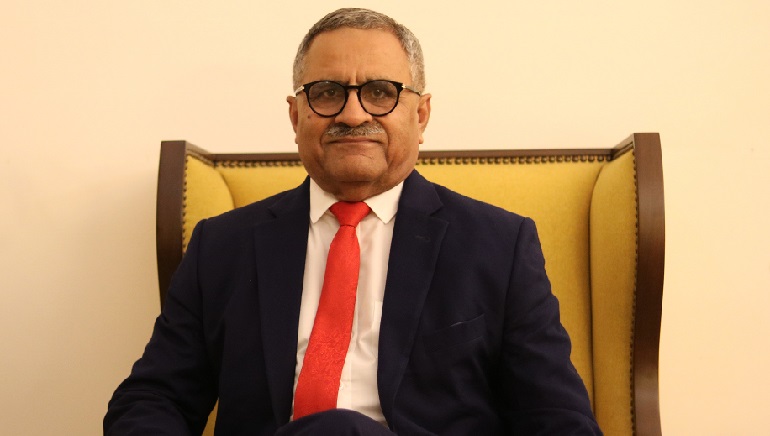 Dr. Kapur has an unrelenting passion and dedication toward improving agricultural produce with better quality seeds that don’t harm the soil. He has spent a large amount of his career engaging in R&D to develop these high-yielding hybrid seeds in vegetable, cereal, and oil seed crops. His simple vision was to transform the seed sector and he dedicated his life to achieve transformation in agriculture for better outcome.

WHERE IT ALL BEGAN

A veteran in the food production industry, Dr. Arvind Kapur started his career in 1980 after completing his Ph.D. from Panjab Agriculture University in plant physiology and understanding molecular genetics functionality. Prior to that, he had completed B.Sc (Hons) and M. Sc (Hons) from the same university. After completing his education in 1980, he joined the PAU as an assistant professor in the plant breeding department. Soon, he was promoted to associate professor and in 1988 he left the university to join Pioneer Seed Company which became Proagro seed company in 1990. His journey to transform and lead some significant developments in the food production industry thus began. With a strong background in breeding and molecular genetics, Dr. Kapur worked diligently at Proagro. He was leading multiple functions at Proagro including R&D. Shortly after joining, in 1994, he was made the director of Proagro-PGS, a joint venture between Proagro and Plant Genetic Systems of Belgium, a leading company for biotech research. At Proagro-PGS, he started the first-ever experimental research on genetic modification in mustard seed in India. Soon he became the MD of this JV and led the development of the first transgenic mustard hybrid with “Seedlink” technology. His vision had always been to transform the seed sector and modernize the food production industry. With his dedication and hard work, he has been able to realize his vision and take this industry way beyond anyone would have thought. In 1998, Proagro merged with Agrevo-Hoechst and Aventis and finally in Bayer, and Dr. Kapur became the MD of Nunhems India after merger. He started the operations of vegetable seeds of the Global company Nunhems of Netherland in India. In a short span of 10 years, Nunhems became the leader in the vegetable seed sector and Dr. Kapur expanded its growth into China, Indonesia, and Thailand. By then he was also leading the R&D APAC region and thus led this company into geographical expansion. A few years down the line in 2009, Dr. Kapur decided to take plunge and started a vegetable seeds subsidiary under Rasi Seeds company with a different brand name HyVeg and that’s how began his entrepreneurial journey as CEO of Rasi HyVeg.

In 2015, HyVeg was demerged from Rasi Seeds and named Acsen HyVeg. Dr. Kapur became the MD of this new entity and led this company to touch greater heights. Under his leadership and vision, Acsen HyVeg has been continuously providing the best quality vegetable seeds to small and medium land holding farmers. Dr. Kapur’s aim is not limited to developing the best quality hybrids but he is also working diligently to improve local open-pollinated varieties of vegetable crops. It is this foresight and futuristic vision that has led the company to be the 5th ranked company in Asia and number 1 in India ranked by ‘Access to Seed Index’ a global organisation supported by Bill Gate Foundation and FAO, a UN body. Dr. Kapur has made it as his mission to cover more acres with performing seeds and protect the soil as well as the environment through resistance breeding to reduce the chemical usage. Since the beginning of his career, Dr. Kapur has been committed to transforming agriculture through improved genetics and new technologies and he has translated this passion into his work at Acsen HyVeg. Dr. Kapur’s passion is contagious and rubs off on all his team members. The targets might be difficult to achieve but it is his strong support and work ethic that makes his entire team dedicated to the same cause. He is a people’s manager and believes in taking his entire team with him. He listens, guides, supports, and delegates work according to the team member’s ability. Only a true leader can bind a team together and ensure that while the collective dream gets fulfilled, each team member also gets enough space to grow and realize their own personal career goals.

Dr. Kapur has over 40 years of legacy behind him and his expertise in the food production area is truly unmatched. For his stellar contribution to the agriculture sector, he received the Bhartiya Udyog Ratan Award in 2006 and again in 2015. This award was presented by the Indian Economic Development and Research Association (IEDRA). He also received recognition from one of the leading publications Marquis Who’s Who which publishes short biographies of exceptional performers from all over the world. Dr. Kapur was listed in this prestigious magazine for three consecutive years from 2013-15. In 2020, he was named amongst ‘10 Best Leaders in Agriculture Industry’ by CEO Insights Magazine. He has also won the “Best Leader in Agriculture” Award by Food 2.0 Dubai. He has also shared the depth of his knowledge and experience in many papers and articles. With over 25 scientific articles and 25 professional articles to his name, he is one of the most noted authors in the sector. He also has published book chapters in Michigan State University publication on Vegetable breeding in climate change. Dr. Kapur is also a very sought-after name for lectures in India and all over the world. He has delivered more than 250 lectures on Biotechnology, Agriculture policies, IPR, and other related subjects. Most recently, he published an article in the magazine Business Sight’s 10 Most Trusted Brands of the Year 2021. He is also a prominent member of CII, FICCI, ASSOCHAM, and PHDCCI, Chairs the APSA Committee, and also member of the IP committee of ISF and was a board member of the Indo- Swiss Collaboration in Biotechnology (ISCB). Presently he is vice chair of FSII.