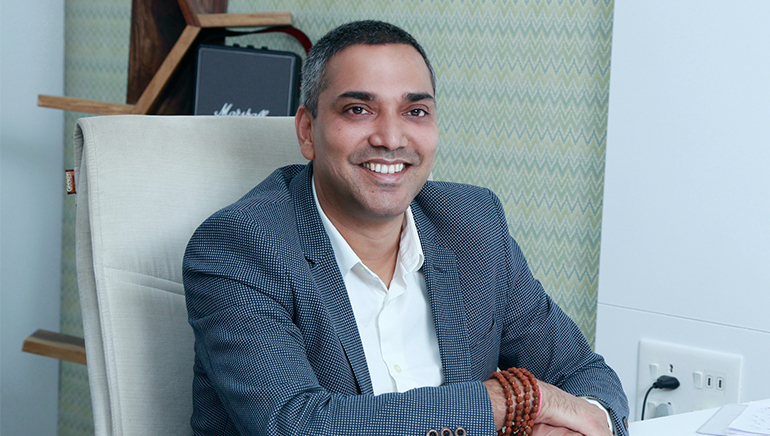 It is said that businesses take not only sweat but blood and tears to build – and who is better to share that than family. BL Agro is one such brand that has was started by a visionary but sustained by his children. Mr. Ashish Khandelwal has been efficiently carrying forward the legacy of excellence established by his father, Mr. Ghanshyam Khandelwal, who started this business back in 1985 with a seed funding of Rs 10 lakh. Over the years, BL Agro went on to become a name to reckon with and changed the face of Bareilly – the small town in Uttar Pradesh where the company was started. Mr. Khandelwal joined the business in 1999 and had big shoes to fill. Under his guidance and perceptive leadership, BL Agro has scaled new heights and is today a well-known FMCG brand with a turnover of Rs 2,500 crore.

Since joining the business, Mr. Khandelwal has made it his mission to establish himself as a growth motivator by bringing in new age marketing concepts & innovations. He has worked really hard at establishing an unmatched hold on the market pulse. “I am committed to take BL Agro to newer heights,” he says. He continuously works on the infusion of new cutting-edge technologies, modern innovations, & adaption of the latest marketing trends. Translating his futuristic outlook into action, he has scripted the firm’s venture into many modern business methods. He brought in consumer packs segment, latest fully automated packaging system from France, an automated racking system from Japan & various other machineries from Germany, Spain, Korea, Italy, Belgium, etc.

Mr. Khandelwal puts a lot of importance to decisiveness. He truly believes in making decisions quickly, even the most difficult ones. The other thing that he always keeps on the forefront is innovation. He is always keen about uniqueness and novelty. As a leader, he tries to always motivate the team to achieve higher levels of success one task after another. “I deal with crisis & challenging situations with courage and endurance. During my growing up years, I had seen how my father built the business from scratch and took it to great heights. His journey has always inspired me. At the same time it was a challenge to expand further and take our company to the next level,” he shares. But, he did deliver. He managed to take a business that was built with spirit & resolve and made it into a modern multi-million FMCG brand. His most successful initiative was diversifying the firm’s portfolio & adding food items to the existing oil business. Mr. Khandelwal worked tirelessly to launch food products under the brand name ‘Nourish’. His efforts received immediate acceptance and appreciation from the market when the new products got a great response. It was his carefully thought strategy in developing each product. He did an elaborate study of market dynamics & consumer behavior & launched products that had higher health and nutritive value. To support this he also established top-of-the-line production capabilities.

ONE STEP AHEAD, ALWAYS

It is the characteristic of a true leader who sees beyond just statistics and figures. One who thinks of each and every individual in the company while moving ahead and also tries to influence the surroundings with his ground-breaking efforts. At BL Agro, Mr. Khandelwal has led many such initiatives that have had a lasting impact on all employees as well on the environment. One of the most appreciated efforts has been the installation of air purifiers that improved the Air Quality Index of the region by 88%. Along with the air purifiers, he also led initiative where the entire manufacturing plant was made to operate fully on solar power. Such initiatives have a chain effect wherein first the employees benefit as their work place becomes better and in turn the city became more breathable for everyone. To fight the Covid-19 pandemic, the management at BL Agro recently organized COVID-19 vaccination camp on their premises for the entire workforce based at the corporate office in Bareilly. Mr. Khandelwal and all senior management ensured all their employees and their family members get vaccinated. The company also took responsibility of Covid-affected employees with all the necessary things such as hospitalization, arranging oxygen cylinders, doctors, timely delivery of medicines, etc. Mr. Khandelwal is always the frontrunner in all such initiatives. For their products they rely on farmers and agricultural value chains. To give back to the community, the company also aims at empowering farmers and driving long-term growth through creation of infrastructure to support the agri-industry. At the same time, BL Agro is contributing considerably in the domain of employment generation. Mr. Khandelwal is committed to work towards empowering the nation through large scale employment generation. He ensures that the company continuously updates its employees through skill development programmes. Technical & motivational classes by subject experts are held regularly for all employees. As part of their skill development initiatives the company also imparts training to about 200 business & technical graduates including students from I.T. BHU, HBTI Kanpur and more every year. Mr. Khandewal also organizes industrial visits to diploma and graduate students of various streams.

Under Mr. Khandelwal’s leadership, BL Agro has received many awards. In 2018, the company won Corporate Excellence Awards from Rohilkhand Management Association and the same year World Federation of Marketing named BL Agro ‘Emerging Company of the Year’. More recently, Zee TV awarded the company ‘Uttar Pradesh Business Leadership Award’. Mr. Khandelwal’s sincere efforts have been recognized widely. To explore newer markets, newer opportunities and ways to make the brands visible, he has decided to invest heavily into advertising and promotion of both their brands. From celebrity endorsements to launching a full-fledged ecommerce portal, he has taken all possible initiatives to take the brand name even higher. He has even adopted an innovative distribution strategy by opening exclusive brand stores in various states. He has proved that he not only has vision but a firm mind that takes difficult decisions at the right time, which is vital for any business. It is with his foresight that the changing times were converted into growth opportunities.