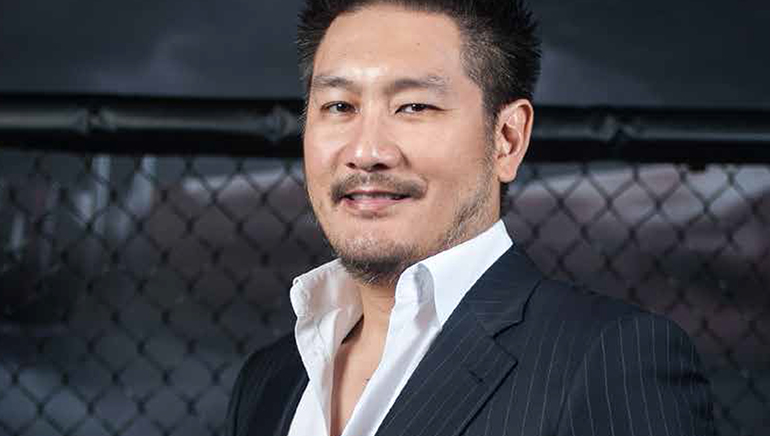 DOING WHAT HE LOVES

Raised in Thailand, Chatri Sityodtong has written his own script of success that has inspired thousands of people around the world. An entrepreneur and martial artist, Sityodtong has an extraordinary story of building up an empire from nothing but scratch. Chatri, who is currently riding on the chariot of success, was once homeless and survived on one meal per day. Without the support of his father, his family struggled to meet the daily expenses and lived in dire poverty. His perseverance and strong will made him overcome all the obstacles and achieve something as big as reaching the position of the CEO of ONE Championship. He firmly believes that a man is not what he owns but what he loves and he loved martial arts since his childhood. He associated himself with martial arts during his childhood when he started learning Muay Thai boxing under Kru Yodtong Senanan of Sityodtong Camp in Pattaya, Thailand. He has over 30 years of martial arts experience as a student, a fighter, a teacher, and a coach and is a certified senior Muay Thai instructor under the legendary Kru Yodtong Senanan of the world-renowned Sityodtong Gym in Thailand.

IGNITING THE DESIRE TO SUCCEED

Sityodtong incepted the idea of ONE Championship with a mission to unravel the stories of real life superheroes who inspire the world with hope, dreams, inspiration and strength, as he wants to celebrate the deep-rooted Asian values of integrity, humility, honour, respect, courage, discipline and compassion. He wants to unleash greatness in the world through the power of martial arts and hopes to eliminate social evils of poverty and inequality. He believes that the champions who fight against all odds in order to achieve their dreams should be introduced to the world so that they can inspire others to dream more, do more and be more in life. His foresightedness and adept leadership skills have made the brand Asia’s largest sports media property with a global broadcast to over 2 billion viewers in more than 140 countries. Chatri who himself has proved to be a warrior now wants to introduce several ther fighters who can prove to be the role models for thousands of people by igniting their desire to succeed. Since Asia has been the home to martial arts for 5000 years, so he conceptualised the concept of ONE Championship to carry forward this traditional art form. This concept is totally unique and developed after adept planning as he has taken an unprecedented step by introducing weight classes that are unlike any other martial arts organization in the world.

ONE leads the global martial arts industry by banning weight-cutting by dehydration, choosing instead to implement a revolutionary system that ensures athletes are fully hydrated, fit, and healthy ahead of their bouts. The new program, which is the first of its kind for combat sports, is focused on athlete safety by introducing walkingweight competition via multiple weigh-ins and tests before and during fight week, including 3 hours before an event begins.

Chatri is a hardworking & multifaceted person as apart from being the head honcho at ONE Championship, he is also an Entrepreneur-in-Residence and guest lecturer at INSEAD which is one of the world’s leading business schools. He is also an advisor and mentor to the NUS’ Entrepreneurship Centre and a regular guest speaker at the SMU.