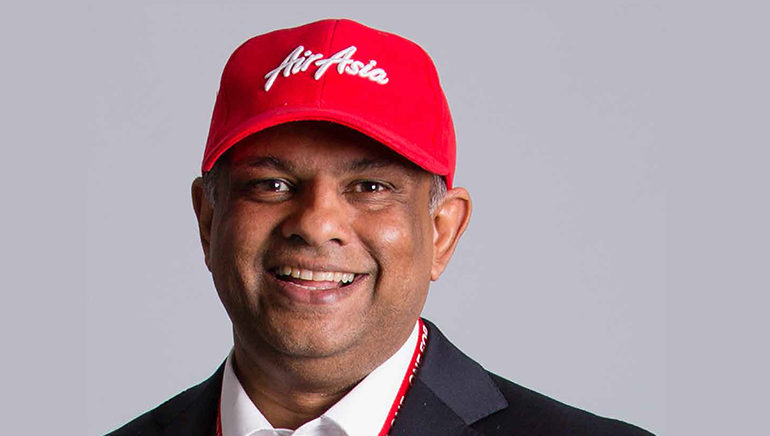 Mr. Fernandes is the CEO of the Air Asia Group, a low-cost airline that operates scheduled domestic and international flights to more than 165 destinations in 25 countries. A graduate from the London School of Economics, he is currently the member of the Institute of Chartered Accountants in England and Wales. He always had a dream of owning an airline because he believed that airlines connected people. Thus, he planned to make connecting more convenient for them. Son of an ingenious businesswoman, he saw innovative business ideas being discussed and executed at close quarters. The concept of establishing Air Asia originated when he felt that people in South-East Asia like to travel in a budget-friendly way. His aim was to set up a low-cost airline so that everyone can fly at affordable fares.

With a goal to build a low-cost carrier that would make air travel cheaper for an ordinary person, Tony along with his business partner Kamaruddin Meranun took over Air Asia in 2001 Mr. Fernandes mortgaged his home and used his personal savings to acquire the company that comprised two Boeing 737-300 jet aircrafts and debt of US$11 million. But his precise acumen towards handling the operations of the airline helped clear all the debts within a year and the airline touched the break-even point. Soon it expanded throughout the continent as its affiliate airlines Thai Air Asia, Indonesia Air Asia, Philippines Air Asia and Air Asia India started serving a large number of passengers. The unique tagline of Air Asia “now everyone can fly” indicates the low fares that enable middle-class to travel by air and connectivity to places that were earlier not well-connected aerially. Mr. Fernandes’ biggest achievement has been to open up countries within the South-Asian region, which previously did not have open-skies agreements, to new budget carriers. He has always focused on reaching out to the remotest parts of the planet in order to connect these with the rest of the world.

TURNING THE DREAMS TO TRAVEL INTO REALITY

While establishing the airline, Fernandes’ vision was to make air travel affordable for everyone as he was well aware of the fact that that people want the best prices for the tickets and unbeatable airfare deals that can help them in maintaining their travel budget. So he came up with a unique and bold idea of providing discounted airfares that can let the passengers travel anywhere, anytime without burning a hole in their pocket. It also allowed them to book a last-minute flight without caring about the ticket prices as the airline started offering plenty of lucrative offers to its customers. Through its attractive offers and smooth booking process, the airline has become a one -stop destination to explore, dream and venture to new places and cultures and turning the commoner’s dreams to travel by air into reality.

He has a multifaceted personality and is an expert in handling various operations with utmost dexterity. Tune Hotels, a hotel chain based on the no frills concept having its presence in Britain, Australia and the far-east was the brainchild of Mr. Fernandes. He won the Asia House Asian Business Leaders Award 2017, which is issued annually by Asia House, the Londonbased Centre of Expertise on Asia, to recognise outstanding contribution to Asian business and society. He was honoured for AirAsia’s success and his ‘championing’ of ASEAN.