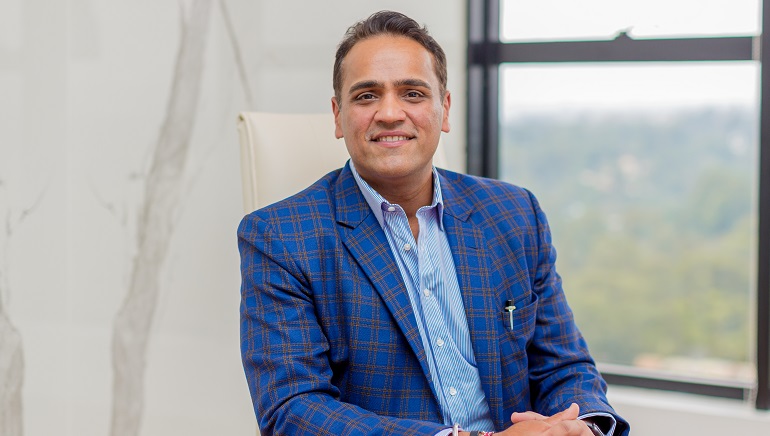 A typical day in Chetan’s office is always buzzing with activity. He can be seen sitting behind a well-ordered desk in his corner office on the 22nd floor of ‘The Address,’ considered by many to be one of Nairobi’s finest commercial buildings. It is a gleaming black tower completed by his company a little over a year ago. He is surrounded by floor to ceiling glass windows. On the ground to his left, work continues on the Waiyaki Way overpass, the main artery through the city. Over his right shoulder, through the morning mist spreads the everexpanding Nairobi skyline. The glass wall in front of him looks out to an open plan office space, where his team is energetically going about the business of the day. The door to his office is open and there is a constant flow of people coming in and out. This is transparency in motion.

DEVELOPMENT OF AN ENTREPRENEURIAL MINDSET

Chetan grew up in the suburbs of Mumbai in a joint home occupied by many aunts and uncles, cousins and siblings. The family was in construction business. He recalls how on many evenings his grandfather would sit with him and explain the intricacies of the business. In this way, he was exposed to and developed an appreciation for the risks and benefits of entrepreneurship. It also taught him when to be competitive and when to be forgiving. This flexibility is on full display inside his office today. As team members arrive at his desk one at a time or as a small group, his leadership style adapts to the situation at hand. Sometimes he is inclusive, giving encouragement, seeking to inspire. Other times, he softly insists on compliance – behaviour learned in childhood.

His father, a builder, was the major influence in his life. To this day, he gets excited about visions grown in his imagination, sharing it with his team, putting it down on paper, then onto a construction site and eventually leaving behind an important building.

AN ENCOUNTER WITH DESTINY

Chetan moved to Nairobi after visiting the city during his honeymoon – a trip paid for by his sister. He recognized at the time that there was a gap in the real estate sector. There were very few affordable developments under construction that were being built to international standards.

Buoyed with the confidence that comes from growing up in a construction family, dealing with day labourers on the one hand, and bankers, investors, contractors on the other, Chetan decided to take the plunge. Hayer One’s first project was a relatively small one – 15 residential apartments. The learning curve, he says, “was very steep.” While there were similarities to the construction industry in India, there were also significant differences – new rules and regulations, building materials to name a few. Yet, Chetan is nothing if not a persistent leader. Mistakes were made and he learned from them. He was transparent, owned up to them, fixed the problems and never took short cuts.

His no-nonsense, issue-oriented approach put him in good stead during the years and projects that were to follow. Owing to his exemplary leadership, Hayer One has developed long-standing relationships with a loyal team of contractors, engineers, designers – on mutual trust – a precious commodity in a tough business. And it is trust that has created consumer confidence in the market. Many of Hayer One’s clients are repeat customers. As he puts it, “Growth can only be sustained if it’s inclusive and approached with a long-term mindset.”

Trust, transparency, and humanity define the corporate culture. It has to be that way. Chetan began operations from a small, 100 sq. ft. office that he shared. It was a one man show. He dealt with the investors, contractors, construction workers, customers, everyone. Hayer One now has more than 60 full time employees and produces over 500 direct employments. On the glass walls of his penthouse office are plans for one of Nairobi’s biggest and boldest residential developments, ‘The Marquis.’ When complete next year, ‘The Marquis’ will consist of more than 250 luxury apartments built to uncompromising standards.

Looking out towards his highly motivated and busy team, Chetan says, “I had to decentralize my approach to management.

The company grew too complex for me on my own. Now we have skilled professionals heading up key departments: Operations, Marketing, Finance, Property Management, etc. We have regular team meetings, where we set specific goals. Sometimes, there are disagreements but in the end we stick to the issues, and progress. I am grateful for the team I have at Hayer One.”

Chetan is also grateful to be living and working in Kenya. The scenery and the wildlife are spectacular. The people are warm and friendly. He is confident of seeing a day in the near future when Nairobi will be one of the most significant cities in the world. Clearly, Hayer One will play a major role in developing this vision into reality.

Corporate social responsibility has always been a part of the culture for Chetan. The general objective has been to support education for the needy. He has supported free schooling activities for kindergartens in India. He has extended consistent financial support towards organizations in Nairobi that build and run schools for the needy.

During COVID-19, he particularly expanded his interests from education to food. He provided support to active organizations in the community in order to provide food packages to thousands of families. At home, in his own company, he ensured that there were no pay cuts so that the families of the employees, who may be suffering from job cuts elsewhere, can balance their household incomes. At his construction sites, wherein the labour force was forced to be cut into half due to regulation requirements of COVID-19, his company initiated a food supply drive to ensure that the labour that’s not being employed can have respectable food supplies for their households.

His ambitions for future include greater initiatives for education for the underprivileged, and also in the field of healthcare including initiatives of dialysis centers.