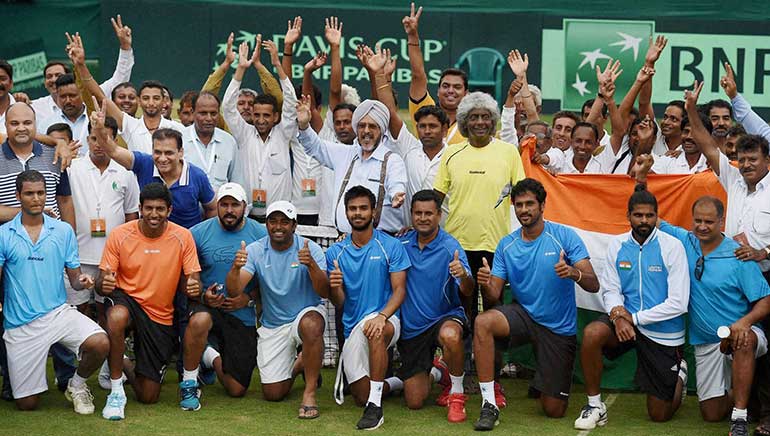 With a perfect finish in the Asia/Oceania Group I tie, the Indian Davis Cup team made its way to the World Group play-offs of the Davis Cup. The host nation’s team defeated its Korean rivals with a 4-1 lead.

Leander Paes and Rohan Bopanna had already sealed the deal by taking a lead of 3-0, winning the only doubles-match against Seong Chan Hong and Hong Chung by 6-3 6-4 6-4. Saketh Myneni and Ramkumar Ramanathan had already won their respective singles.

The final day matches were played in Chandigarh where the humid climate proved to be a hassle for both the teams. While Yong-Kyu Lim prevented a Korean whitewash with a gritty 3-6 6-4 6-7(2) win over Ramkumar Ramanathan, Rohan Bopanna aced the match defeating Chung by 3-6 6-4 6-4. Despite losing the tie, the Koreans have to be credited for giving a tough fight to the Indians. Even though they were playing on a foreign land, they gave their best shot in every game.

After the final win, the Indian team celebrated by dancing on popular Bollywood number, much to the delight of their fans. This is the third time that Indian team has reached this stage in the game, they have lost play-offs twice – against Serbia (in 2014, Bangalore) and Czech Republic (in 2015, New Delhi). The team is all set to secure its position in the elite 16-nation World Group.