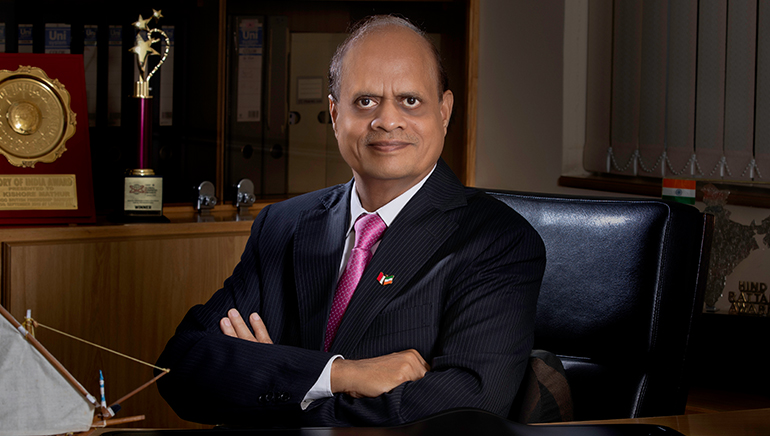 Dr. Mathur truly embodies the spirit of global business leadership combined with a new humanitarian approach. A successful business leader and a recognized corporate trailblazer, he takes pride in his humble background. As he puts it, “I always had big dreams. When I finished school, I decided to follow in the footsteps of my grandfather and uncles and become an engineer. But I saw that only as the beginning – later, I added business and project management to my qualifications to take my career to a different and higher level altogether.”

Armed with a degree in mechanical engineering from Jodhpur, he set his sights on the wider world outside his state of Rajasthan. In 1990, after a stint with Indian big names such as Bajaj and Birla, he arrived in Bahrain as a young engineer and worked in a couple of high-profile engineering projects, including Aluminium Bahrain – one of the world’s largest aluminium smelters. Seeking a larger canvas for his professional growth, he soon joined Ahmed Mohammed Amin Al Khaja & Sons (AMAK) Group of companies. The rest, as they say, is history.

Dr. Mathur is quite meticulous and technical in his approach. His unquenchable thirst for new knowledge has facilitated his participation in many workshops and courses that helped him to bring new skill sets to his work including an MBA and a doctorate study in project management from the USA. No wonder under the joint leadership of AMAK’s Managing Director Mr. Mohammed Al Khaja and Dr. Mathur, AMAK emerged as the first contracting company in the Kingdom of Bahrain to be ISO-certified – ISO 9001: 2015; ISP14001: 2015 and ISO 45001: 2018 – denoting excellence in quality management, health and safety and environment.

In his own words, “I learnt very early on that quality control is not just about the right tools and technology but also about peoplemanagement. In 1996, I was entrusted with leading our company’s certification for the globally recognized ISO quality control label.

We succeeded in installing a management system that is responsive to the strict requirements of the certification process – we were among the pioneers in getting the certification in this field in Bahrain and we focused not just on technical expertise but also on aligning the management experience and deliverables as well because a strong, committed and excellent management automatically guarantees a great endproduct.” He adds, “While quality standards and environmental standards were laid down, we also implemented several worldclass health and safety measures so that workplace accidents were cut to minimum and working conditions improved.”

A game changer, Dr. Mathur has always emphasized on uncompromising quality when it comes to offering goods and services to the customers. This has led to a prestigious track-record that stretches from government contracts to blue-chip companies such as the brand-new Bahrain International Airport, Bahrain Petroleum Co. (Bapco), Aluminium Bahrain (ALBA, Gulf Petrochemical Industries Co. (GPIC) and some VVIP clients who engage the company for palaces, private resorts and industries. It has also spurred a growth of new business ventures in the Group: from decorative wrought iron, marble contracting to industrial car park shades in a country that faces harsh climatic conditions for most of the year.

Over a 27-year period, he has helped to grow the business of AMAK by a stunning 1700% with exports representing a major portion of the total business. This is very good news as Bahrain seeks to recast its business model and move more actively into engineering services and goods, promoting itself as an emerging technical hub for the busy United Arab Emirates and the Northern GCC, especially the giant neighboring markets of Saudi Arabia and Kuwait.

In recent times, Indian technology and expertise has increasingly been chosen by Bahrain to pace its development and CEOs and professionals like Dr. Mathur are at the vanguard of the new Bahraini boardroom. He has found a responsive business environment in the Kingdom of Bahrain, widely celebrated as the best place in the GCC to do business because of its cosmopolitan and inclusive lifestyle, transparent and strong legal framework and relatively low business cost. He rightly points out, “The Kingdom of Bahrain is very welcoming of new ideas and we all know that a successful business thrives on diversity.” “Bahrainis are highly educated and hard-working. They are open to innovation also. This makes it easy for expats like me to share our expertise and be a part of the progress of the nation,” he adds.

He is particularly appreciative of the vision of the leaders of the Kingdom. As he puts it, “One must also pay respects to the late Prime Minister HRH Prince Khalifa bin Salman Al Khalifa who was a stalwart leader and laid the foundation for modern Bahrain in the early ‘seventies,” he says. He further elaborates, “India and Bahrain share a historic and warm relationship that stretches back 5,000 years and that warmth continues to this day.”

Dr. Mathur’s winning streak began in school when he won the President of India’s President’s Scout Award. Of the
hundred-plus awards that he has won, he is particularly proud of the Standard Chartered Asian Businessman of the Year Award 2012 which he received from the Deputy Premier of Bahrain in recognition of his powerful role as a partner in Bahrain’s progress. He is a tireless community leader with key roles in the Lions Club movement, the community Indian School which is the largest single-shift school in the GCC, serving 13,000 students and in the business-oriented Bahrain India Society.

Going forward, Dr. Mathur, like most senior businessmen, is keen to realign priorities in the company’s growth. He says, “We are working to position ourselves as front-runners in the regional solar energy shift. We have already invested in a factory manufacturing solar energy panels and have implemented plans that bring together our existing business in car parking shade solutions and solar panels that generate solar energy electricity. We see this as the future, especially in a region where solar heat is in abundance and untapped.”