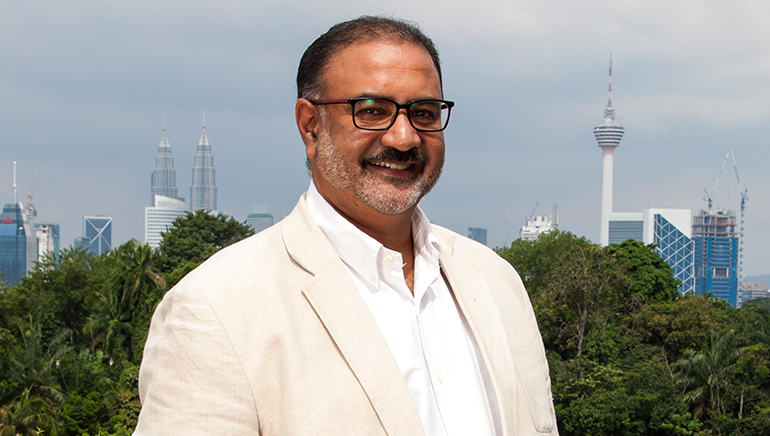 An achiever through and through, Datuk (Dr) Vinod has many firsts to his credit. He was one of the first Malaysians to venture into the former Soviet Union after its dissolution and was a part of the privatization of its second largest petrochemical plant. He was also the first Southeast Asian to own both Formula 2000 and Formula 3 Championship motorsport teams, and he founded Malaysia’s first sports car company. He started East Asia’s largest fruit and vegetable farm in Malaysia, 3 years before the PM called for the development of commercial vegetable farms.

Starting his career at a nascent age while he was still in college, Datuk Vinod established Vincent Siefer Clothing Co. and formed the Sitavani Foundation, which works dedicatedly for the education of children and conducts child development programs. In 1990, he co-founded the STI Group and was responsible for some groundbreaking businesses such as the world’s smallest optic engine, Southeast Asia’s first commercial Internet company, and a variety of other technological innovations. The multimedia arm of the group was behind the first Malaysian joint venture to produce a movie at Disney MGM Studios in Orlando, Florida (Tarzan: The Epic Adventures). After 1997, STI merged with other international interests and The Petra Group was created. Petra is a technology conglomerate responsible for several global technology developments related to Elastomer recycling (Green Rubber), deproteinization, HIV treatment programs, innovative financial software, biophotonics and biofuels.

Talking about his career high point, he elaborates, “There are two. The first being the innovations and technologies we have introduced over the last three decades and what they have achieved. I started the first Southeast Asia commercial internet company in 1993. At that time, there were only 700 internet users in Malaysia. No one really understood what the internet was. But now, the internet is everything.”

He adds, “Another business I’m very proud of is Green Rubber (GR). The revolutionary DeLink technology was invented by my late father, Tan Sri Dr B.C. Sekhar and his friend, Dr Vitaly Kormer, one of Russia’s leading scientists. I took what they started and worked on a commercial version and kept developing it. It took me 15 years and over US$50 million (RM216.5 million) to get it right. We are now on DeLink 4.0, and ready to take on the world.”

Datuk Vinod is a great advocate of ‘Social Capitalism’ which rests on the premise that business interests and societal concerns must work hand in hand. He has been vocal for “simple principles of a civilized society” where all businessmen must involve themselves in their own society’s positive development. As he puts it, “I have been called a ‘Social Capitalist’ by the late Cuban leader, Fidel Castro, and I humbly accept the moniker as I truly believe that social capitalism is the only true form of capitalism. The spirit of social capitalism (for-profit enterprise in which wealth creation and social good are motivators) is how I lead and do business.” He further adds, “I put just as much emphasis on the way I do business as I do on the outcomes of my entrepreneurial endeavours. All the companies under PETRA Group in one way or another contribute towards wealth creation and bettering lives. Everyone in the PETRA team, from my senior executives to our support staff, understand and believe in the idea of doing it right by doing something good. That starts with me ensuring my employees and their families are well taken care of, and then empowering the communities around us.” He considered his father as a guiding light and has been deeply inspired by his ideals and values. As he puts it, “The biggest inspiration of my life is my father, Tan Sri B.C. Sekhar (19292006). From leading an organisation that held sway over tens of billions of dollars of income for Malaysia, he retired as a normal pensioner. No big directorships, no big cash hoard in banks, no private businesses. What he felt more important than anything was the love of his family, the respect of his peers & his integrity.”

Always inclined towards giving back to society, Datuk Vinod is of the view that “Our companies must create products or deliver services that enrich communities by creating wealth. It may be in the form of creating jobs and providing entrepreneurial opportunities, or through education, healthcare & economic empowerment.” Throwing light upon his various socially beneficial initiatives, he says, “The Sekhar Foundation has impacted the lives of over 12,000 children globally. We have built and funded schools and orphanages in Malaysia, India, St. Vincent and the Grenadines. In Armenia, Colombia, we were involved in rebuilding the city after a devastating landslide, and built an orphanage, the PetraValentina House. I am also the Chairman of the Pelita Harapan for terminally ill children, Co-Chairman of the Innocent Child Appeal Fund Board for abused children, and the Chairman of the Sitavani Foundation.” He adds, “The Vinod Sekhar Foundation contributed PPE and test kits for medical front liners, while the food and medical aid were for the low income group during the pandemic. We have also funded a special Malindo Air charter flight to bring home 40 Malaysians who were stranded in Kerala, India, during Malaysia’s Movement Control Order (MCO).”

The World Economic Forum named him as one of its 40 “New Asian Leaders” (NAL). For his outstanding contribution to the world of business, Grant Thornton named him the Malaysian Corporate Leader of the Year in August 2008. In 2008, he received the prestigious Global Green Award from Global Green USA for Green Rubber. He was the youngest, only Asian, & the third ever non-American, after President Mikhail Gorbachev & Giorgio Armani, to receive the award. He has received several other awards such as Global Indian Award presented by the Minister for Overseas Indians in Delhi, Global Indian Origin Magazine’s 50 Most Influential Business Leaders of Indian Origin in the world, the Outstanding Global Entrepreneur by the SME Association, & The Societe Award from the Asia Pacific Brand Foundation, to name a few.