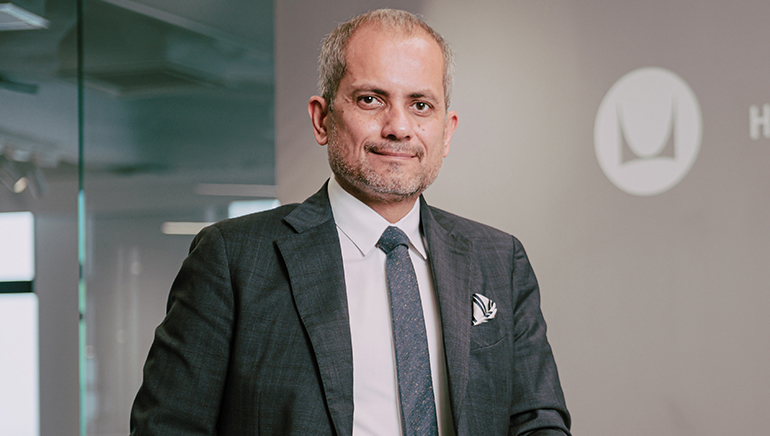 A postgraduate in Business Management from XLRI Jamshedpur and in Marketing from Symbiosis, Kartik is a software programmer by qualification. He is a thorough professional who believes in continually upgrading his knowledge and skills and has recently attended a few executive courses with INSEAD at their Singapore and Fontainebleau, France campuses. In July 2019 Kartik completed his certification in Digital Business strategy from MIT Sloan School of Management.

Having started his journey with Herman Miller as the Country Manager for India in 2009, Kartik has contributed immensely to its success and growth. In fact he has grown with the organization. He quickly went on to become the Director of the company followed by Strategic Business lead to manage China and Hong Kong and within a year was entrusted with the opportunity of leading the Contract business for APAC. In 2015, he moved to Hong Kong for this new role and in 2016 was promoted as Vice President for APAC region. In early 2020, he was given the responsibility of HM Internal Business Unit in India and during COVID-19 period Middle East and Africa were added to his existing region, resulting in an extended region called APMEA.

He has played a significant role in expanding the Online and Retail business for the organization from Japan and China to rest of the region. He has been largely responsible for creating the Korean entity and growing the business at a CAGR of 41% in 4 years. Kartik is full of gratitude for Herman Miller, which gave him ample opportunities to grow and evolve as a leader.

When asked about his career high point, he delineates, “It is difficult to contextualize high point in one’s career, as every high point is a step in the direction of the next high point. So, if I were to call out one such high point, it would be joining this wonderful organization Herman Miller because this job has given me several such high points in the last eleven years – each special and significant in their own way.”

An autonomous leader, Kartik emphasizes upon individualism, independence and autonomy. He intends to make people feel strong, capable and committed so that they perform to the best of their capabilities. He asserts, “I am someone who has believed in giving autonomy to my people and the key to put that trust in the people is to hire well. 90% of your job is done if you recruit the right person for the job and then granting autonomy is easy. The most important thing while hiring is not to hire someone who is like you, because if you clone yourself you are not going to get freshness of ideas and new routes to meet your business goals.”

Kartik very well understands the significance of harbouring trust among his teammates. He rightly emphasizes, “Ours is a matrix organization, a model which has worked very well for us. The matrix leads typically have been with the organization for over 10 years and so the familiarity, understanding and mutual respect between the leads has helped in fostering an environment of trust leading to everyone, including the team members of each matrix organization, working in a cohesive manner towards a common goal. And the very people centric nature of the organization takes out the sense of insecurity amongst the employees allowing them to focus on the given task. (We have in the past been rated as the top 100 companies to work for by Fortune).”

An enthusiastic and optimistic leader, Kartik envisions COVID-19 as an opportunity to explore and look beyond the current offerings of the firm so as to seek fresh avenues to diversify and expand. Talking about his vision for the future growth of the organization, he elaborates, “In the current scenario, my short term goal will certainly be to keep our flock together and to keep them motivated, to think about what new product offerings and solutions we will need to be ready with for this new and altered world and to keep the engagement going with influencers in the market. Mid to longer term would be to tap the opportunities that we have generated with these new solutions and engagements.”

Talking about some of the measures he had undertaken to cope with the challenges faced in the prevailing Covid-19 pandemic situation, he says, “First and foremost was to ensure the safety of our colleagues. Protocols were set to sanitize the offices at regular intervals. Strict travel protocols have been put in and stay in place even today with very few exceptions. These protocols have been appreciated by our employees and they feel safe and proud to work with a company that puts the interest of the employee first.”

He adds, “We took up several initiatives where we offered counselling to our employees to help them in dealing with these tough times as they are first on our list to give back to the society.”

“Several community activities were undertaken and continue to be undertaken where we are getting food or other necessities delivered to people most affected by this pandemic. In addition, Work From Home initiatives taken up by our corporate customers were supported by us by extending deep discounts to their employees so as to enable them to equip their homes with ergonomic high quality furniture to ensure that their body is supported well when working from home,” he says.

He truly understands the significance of CSR and enthusiastically participates in giving back to society. As he puts it, “In 1953 our founder D. J. De Pree made a statement that ‘We will be good stewards of the Environment,’ – at a time when there was no apparent environmental threat or for that matter no carbon credits or hole in ozone, but he had that vision for the earth. This direction is ingrained in every Herman Miller employee & pursued at all levels and all products have been designed keeping in mind the environmental impact. Beyond that, Herman Miller Cares – our division which is very active in giving back to the society engages with all our locations across the world to make sure that we are contributing more than our share to the society.”