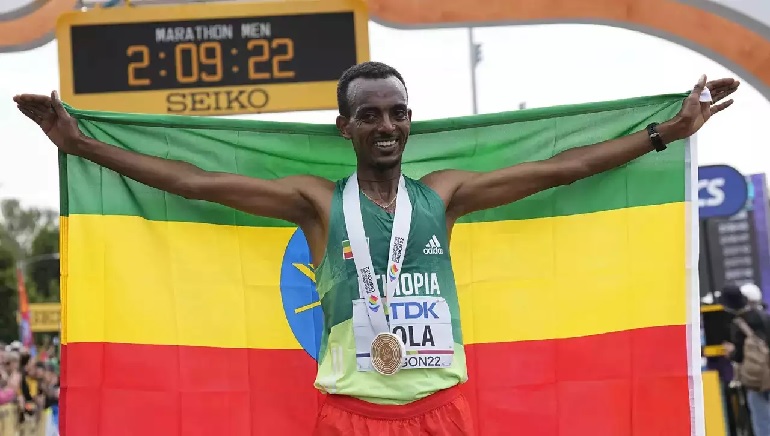 Ethiopia’s Tamirat Tola won the men’s marathon in a dominant style at the World Athletics Championships on Sunday. Tola clinched the Gold as he finished the race in 125 minutes 37 seconds, breaking the previous best record held by Kenya’s Abel Kirui, who clocked 126 minutes 54 seconds in Berlin in 2009.

The cool conditions offered by the 6.15 am local start time offered an advantage to the Ethiopian, who, with a sustained acceleration, continued to move towards the finishing line.

Mosinet Geremew won his second successive silver while Belgium’s Bashir Abdi claimed a bronze, bagging his country’s first medal in the event for men or women. Canada’s Cameron Levins finished fourth, while Kenya’s Geoffrey Kamworor, who resumed racing after a broken leg that resulted because of a motorbike hit during a training run in 2020, finished fifth.

Tola had won bronze in the Olympic 10,000m at the 2016 Rio Games and silver at the 2017 London worlds. In the last few hundred meters, the 30-year-old waved to the crowd, enjoying the biggest win of his career.

“It was a dream come true,” Tola said. “I learned from my mistake in 2017 (World Championships) and I made sure it did not happen again.”