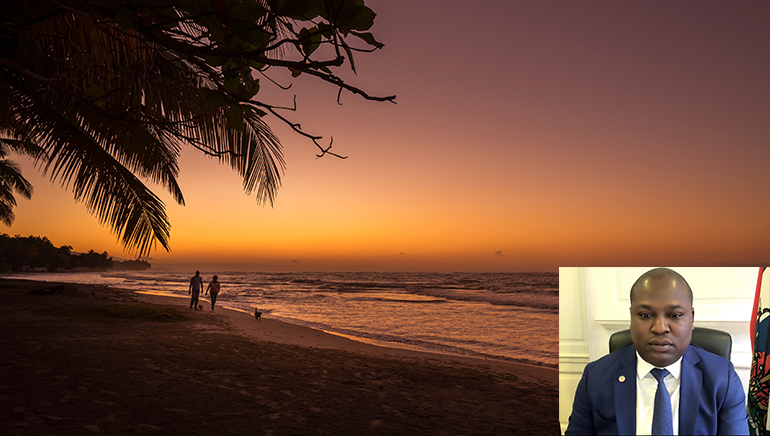 THE LAND WITH A SOUL

The Republic of Haiti, given its historical and cultural legacy, continues to be perceived and cherished for the perspective of human rights and dignity it stands for. Among other physical points of interest, the Haitian roots, culture, rare and unique history constitute the archil hills that should trigger tourists’ curiosity

By His Excellency Mr. M. Euvrard Saint Amand Ambassador of the Republic of Haiti to the United Kingdom

Formerly nicknamed Quisqueya, the island of Haiti was inhabited by Indians before the arrival of Christopher Columbus in 1492 in America. Decimated because of forced labour due to slavery, the Indians were later replaced by black Africans torn from the African continent via the transatlantic slave trade of European colonizers who competed for control of the island.

Haiti became a colony of France for more than three centuries. It provided the raw materials that enriched the economy of the major cities of France including Paris, Bordeaux, and Nantes. In 1791, African slaves began the revolution that followed the abolition of slavery in 1794, as reported by several historians, such as Thomas Madiou. When Emperor Napoleon Bonaparte

decided to re-establish slavery in Saint Domingue (Haiti’s former name) in 1802, the slaves got united to free themselves. They defeated the largest European army of that time and gave birth to the world’s first free black nation-state in January 1804. Frightened by the subversive idea that a republic should be ruled by blacks, the Western states of the time diplomatically and economically isolated Haiti. For instance: the Vatican waited until 1860 to establish ties with Haiti, which is a country officially declared Catholic. In addition, the United States of America, despite secretly trading with Haiti, recognized Haiti in 1862, during the Civil War that caused the abolition of slavery in the United States. After its independence, which has been penalized by the international community, especially French, Haiti played an exemplary role in the quest for freedom in the region and in the world. The, then, international context and the repeated threats from France to re-establish slavery into the former colony triggered the fathers’ founders of that new nation to build multiple fortresses within most of the country’s mountains to defend the territory in case of any assault. Today, those fortresses are considered, alongside with the beautiful beaches, the most visited touristic sites in Haiti. From those fortresses, the great, mysterious, majestic, and marvellous CITADELLE LAFERRIERE is among the world’s most beautiful buildings and had been recognised as world’s heritage by the UNESCO

Moreover, Haiti provided considerable assistance in ammunition and strategies to the revolutionaries. of Latin America, in particular Gran Colombia – composed of Venezuela, Colombia, Ecuador, and Panama – from Francisco de Miranda in late 1805 and then to Simon Bolivar. The Republic of Haiti contributed to the independence of Greece from the Ottoman Empire in 1822. Although they started to fight on 25th March 1821, which is their independence date, as a sign of recognition to Haiti’s support, the Greeks declared their independence on 1st January, like Haiti, and adopted the same national motto of Haiti’s war of independence “freedom or death.” Similarly, at the United Nations conference in February 1945 in Yalta, which France did not attend, Haiti allowed the French language to become, like the English language, a working language at the United Nations on April 27, 1945.RégisDebray in Haiti and France. Report to Dominique de Villepin, Minister of Foreign Affairs (Round Table, Paris 2004) reports the words of Georges Bidault, president of the French delegation, to Haitian diplomats: “France owes you an eternal gratitude”. Historians recall that Haiti was an emblematic figure in the debates on decolonization. Haiti has actively participated in the process of Africa’s independence in terms of human’s resource and knowledgetransfers. This historical presentation highlights the attachment of the Republic of Haiti to the humanist values of liberty, equality, justice, solidarity, and selfdetermination. These values are the foundation carried by the Haitian Revolution of January 1, 1804, as a starting point in the quest for freedom throughout the world.

Haitian culture is refined and abundant. Indeed, Creole is the most popular language in Haiti alongside the French language which is used as an academic and administrative language. Vodou, far from being only a religion, is the crucible of the model of social organization, identity, and resilience of the Haitian people in the face of formidable circumstances. Creole and Vodou both played a decisive role in the birth of Haiti. They are, to repeat LaënnecHurbon, “processes of self-reconstruction through the re-creation of new symbolic networks taken from Africa and subject to reinterpretation…” (Vodou and the Haitian Revolution, LaënnecHurbon). Geographically, Haiti forms the western three-eighths of the island of Hispaniola, west of the Dominican Republic and located east of the neighbouring island of Cuba, between the Caribbean Sea and the North Atlantic Ocean. The plate where Haiti is located is constantly jostled and crushed by tectonic movements caused by the rush between the North American plate, the Cocos plate, the South American plate, and the Nazca plate. Despite its fragile location, Haiti has an important relief that makes it an excellent touristic and culinary destination. The Haitian gastronomy is one of the best tastes in the world with every single dish being organic and fresh. Alongside with the national dishes which consist of RICE AND BEANS-LALEAU or GRIOTBANANE PESEE-PIKLIZ (fried Pork-fried plantain- chilly sauce), the remarkable and delicious SOUP JOUMOU (pumpkin soup) which is mostly consumed throughout the country every 1st January to celebrate the independence, had been recognized as world’s cultural heritage by the UNESCO in 2022. Finally, with its sublime landscapes, composed of waterfalls, caves, forests, mountains and magnificent beaches, voodoo practices, colorful naïve art and culture, Haiti has always fascinated all its visitors and remain a rare and unique experience for tourists from everywhere on the planet.

HISTORICAL AND TOURIST SITES IN HAITI

Haiti has numerous historical and tourist attractions. Some of the prominent centres of attraction as listed below.

1. The MUPANAH Museum in the city of Port-au-Prince

Built partially underground, this museum displays artefacts illustrating Haiti’s history with an emphasis on its revolutionary years and its political and cultural forefathers. Get up close to artefacts from a Colombus ship, slave shackles, murder weapons and the bell that rang in independence.

Thissmall island in the Caribbean Sea is a commune in Haiti that extends over nearly 46 km2. Île-àVache, which was a den of pirates in the seventeenth century, including Captain Morgan, is a real little corner of paradise where nature imposes itself and cars have no place.

3. The Coast of the Arcadins

Located on the western shores ofHaiti, Les Côte des Arcadins in Montrouis, Haiti is a popular destination to travelers worldwide. The area is home to five gorgeous resorts: Kaliko Beach, Wahoo Bay, Ouanga Bay, Moulin Sur Mer and Royal Decameron All Inclusive Resort and Spa. Each resort offers guests something different, but all of them are perfect spots for the perfect getaway in the Caribbean.

Theremains of Haiti’s National Historical Park, recognized as a UNESCO World Heritage Site since 1982, are found in the north of the country. The National Historical Park of Haiti includes three impressive sites: – The Citadel La Ferrière, a huge fortress erected in the early nineteenth century that rises to 900 meters above sea level, making it the largest fortress in the Caribbean. At the top, the panoramic view of northern Haiti and the Caribbean Sea is breath-taking! – The ruins of the Palais Sans Souci, the former residence of King Henri Christophe ravaged by earthquakes that occurred in 1842 and 1843. – The fortified site of Les Ramiers, a plateau containing the ruins of a fort, covered with vegetation until 1972.

The Citadelle La Ferrière is a military structure built in the early nineteenth century in Milot in Haiti in the Department of Nord, by Henri Christophe. It is the largest fortress on the American continent: at 900 meters above sea level, it is located 15 km south of Cap-Haïtien, within the National Historical Park – Citadel, Sans Souci, Ramiers classified as a UNESCO World Heritage Site since 1982.

The Bassin Bleu, or Basenblé in Haitian Creole, is a beautiful natural site located near the city of Jacmel, in the mountains. It is composed of three pools with turquoise water (the Yes Basin of 4.6 meters deep, the Palmist Basin of 17.4 meters deep and the Clear Basin of 22.8 meters deep), into which sometimes spectacular waterfalls flow. Surrounded by lush vegetation, caves and fruit trees, these coolwater pools are perfect places to enjoy a swim, in an enchanting setting!

Locatedat Camp-Perrin, in the south of Haiti, the Saut-Mathurine, is one of the largest and most beautiful waterfalls in the country. 27 meters high and about 30 meters wide, this incredible waterfall extends over the river Cavaillon and flows into a natural pool where it is possible to swim. Ideal after a hot day visiting the surroundings! For the anecdote, its waters are used to produce electricity and thus supply the cities of Camp-Perrin and Maniche

The Grotte Marie-Jeanne is the longest natural excavation in the Caribbean. It is a real underground labyrinth of several kilometers that would have about 56 rooms, and whose formation would date back nearly 60 million years. The interior of the cave is covered with speleothems, limestone formations typical of tropical caves. This natural treasure, located on a hill at 120 meters above sea level in the city of Port-à-Piment, in the south of the country, makes part of the things to do in Haiti!

WhyShould you go see the Sautd’Eau Waterfall if you plan to visit Haiti? Because the supposed magical virtues of this beautiful and vertiginous waterfall make it an emblematic sacred place of voodoo practices on the island! Its waters come from the Terrible Mountain, also considered a sacred place for Catholic and voodoo believers. The Saut d’Eau waterfall is in the district of Mirebalais, in the heart of the country.

This park with an area of 20 km2 is part of the Massif de la Hotte and encompasses two Haitian peaks which are the peak of Formon (2219 m) and the peak of Macaya (2347 m). It is one of the last primary forests in the country and is home to endemic species in its tropical rainforest, which explains the importance of protecting this endangered treasure.

Labadie, or Labadee, is not only the name of a famous private seaside resort, luxurious and very frequented by tourists, it is more generally a bay formed by a paradise peninsula. Located a few kilometers northwest of Cap-Haitian, the bay of Labadie and its turquoise waters are overlooked by beautiful mountains. If you plan to explore this corner of the country, take the opportunity to stroll through Cap Haitian, or the natural site of Île-à-Rat, also called Amiga Island! The latter is an islet composed of a small virgin forest and white sand surrounded by crystal clear water from which visitors are invited to go diving, kayaking.

Tortuga Island is a Caribbean island that forms part of Haiti, off the northwest coast of Hispaniola. It constitutes the commune of Île de la Tortue in the Port-de-Paix arrondissement of the Nord-Ouest department of Haiti. The island owes its name to Christopher Columbus, because of its sea turtle shape. Tortuga is 180 square kilometres (69 square miles)[3] in size and had a population of 25,936 at the 2003 Census. In the 17th century, Tortuga was a major center and haven of Caribbean piracy. Its tourist industry and references in many works have made it one of the most recognized regions of Haiti. Recently, the cinema (Captain Blood by Michael Curtis, the pirates of the Caribbean film series…) has made it a mythical island by using it as a set and staging it! Discover this wild and mysterious island, and judge for yourself!