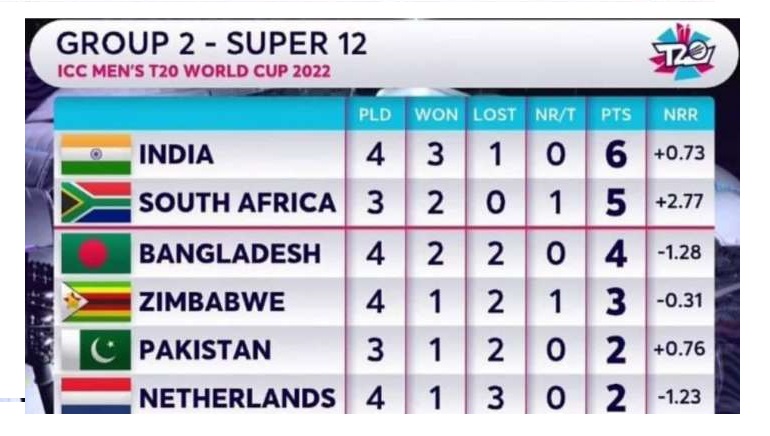 India beat Zimbabwe by 71 runs in their last T20 World Cup 2022 Super 12 stage match on Sunday. With the win, India recorded most victories in the Super 12 stage of the tournament across both the groups – four wins in five matches. India finished top of the Group 2 points table, followed by Pakistan, South Africa, Netherlands, Bangladesh and Zimbabwe.

The Super 12 stage came to an end on Sunday, when three matches of the ICC Men’s T20 World Cup 2022 were played to decide two semi-final fixtures.

The day started with a shock, as South Africa lost to the Netherlands, exiting the tournament to allow Pakistan or Bangladesh to qualify. In the next match, Pakistan beat Bangladesh to confirm their entry into the semi-final. India’s excellent all-round performance against Zimbabwe was the highlight of the day. Zimbabwe were bowled out for 115, handing over a 71-run victory to India.

Group 2 teams, New Zealand and England had qualified for the semi-finals on Saturday.

India will now face England in the second semi-final on November 10 at Adelaide Oval, Adelaide. The first semi-final will be between New Zealand and Pakistan at the Sydney Cricket Ground in Sydney on November 9.