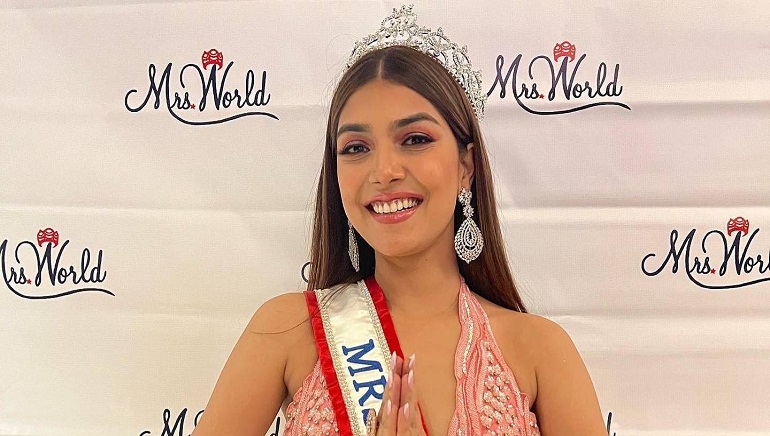 Sargam Koushal of India was crowned Mrs  World at a Saturday evening ceremony held at Westgate Las Vegas Resort and Casino. Koushal, who hails from Jammu and Kashmir, beat contestants from 63 countries to bring the title back to India after 21 years. She was presented the title by Mrs World 2021 winner Shaylyn Ford of the US. Mrs Polynesia and Mrs Canada were named as first and second runner-up.

Sargam Koushal, 32, is married to Aditya Manohar Sharma, a Lieutenant Commander in the Indian Navy. She did her post-graduation in English Literature from Jammu University and B.Ed from Government B.Ed College in Jammu. She worked as a teacher in Visakhapatnam. Besides being a model and teacher, she is also a content writer and painter.

India has only won the Mrs World title once, in 2001 with Dr Aditi Govitrikar bagging the coveted crown. Dr Govitrikar has now served as a judge for Mrs India Inc 2022-23.

Mrs World is the first beauty pageant for married women. The pageant was created in 1984 and initially named Mrs Woman of the World. It came to be known as Mrs World only in 1988. The contest has seen entrants from over 80 countries with the US having the most number of winners.