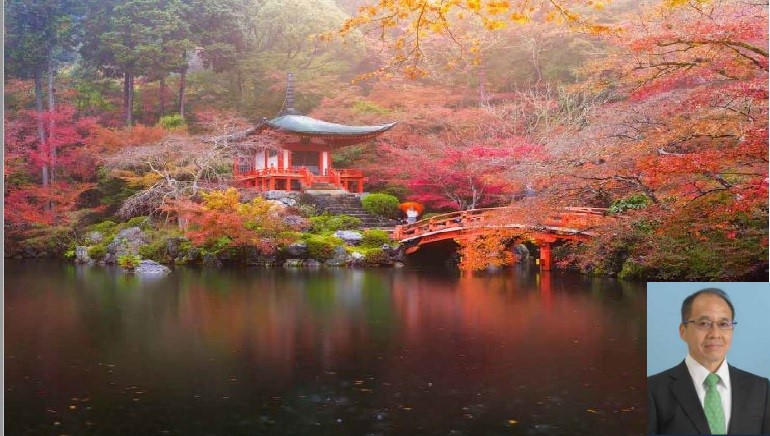 Japan is such an amazing country for tourism that travelling there once is never enough! Mixing action and adventure, people prefer rides on rollercoasters boasting serious speed, climb Mt. Fuji in the summer months, and enjoy themselves to the fullest skiing and snowboarding in the winters. There are cycling routes that give fantastic views, including a ride across a 70 km bridge connecting Hiroshima with the island of Shikoku. Other options include flying down to the subtropical islands of Okinawa where one may enjoy kayaking or exploring mangroves in Yanbaru National Park Japan

By His Excellency Dr. Akima Umezawa, Consul-General in Dubai, Japan

Tourism is considered a pillar of growth strategy in Japan. Japan is ranked as the 4th competitive country in the travel and tourism sector among 141 countries in the world. This is the highest in Asia! Japan has scored remarkably higher points in almost all aspects, such as health and hygiene, safety and security, and cultural resources and business travel. Japan is especially proud of its traditional cultures, foods and four season’s nature. Last year, Prime Minister Shinzo Abe had announced that the government would boost efforts to achieve its target of 40 million visitors to Japan by 2020, as it seeks economic growth through tourism. The number of tourists visiting Japan has drastically increased in the last decade, and it has also updated its historically highest record every year, such as 28.8 million in 2017 and 31.2 million in 2018. Prime Minister Abe has also pointed out that “The target of 40 million visitors to Japan in 2020 is now within our reach. We will swiftly work toward it,” in a Cabinet meeting on tourism strategy at his office. During the meeting, the Japan Tourism Agency reported that the number of visitors and their spending in 2017 had increased 3.5-fold and quadrupled, respectively, compared with those in 2012. The agency added that the total number of foreign visitors staying in regional areas quadrupled in the same time period.

Japan is hosting the Rugby World Cup in 2019, as well as Olympics and Paralympics in 2020 in Tokyo. Thus, it views tourism as a pillar of its growth strategy. It has eased visa requirements for many friendly countries, especially for India and the UAE in the last couple of years. It has also increased the number of low-cost carriers and other flights to boost inbound tourism. Tourism-related facilities and services have expanded dramatically especially for tourists from foreign countries.

The Recent Future Now, Japan has grand ambitions to bring more than 60 million visitors to the country by 2030. In the meantime, the country isn’t just dreaming a huge target, it’s encouraging enormous concrete actions too. Thanks to concerted country-wide endeavors by governments, local municipalities and private sectors to transform the Japanese tourism economy, the country seems on track to achieve this vision, according to the Japan National Tourism Organization.

Japan will soon host several international events, including the Rugby World Cup (2019), the G20 Global Summit in Osaka (2019), the Olympics and Paralympics in Tokyo (2020), and the Kansai World Masters Games (2021), among others. The Rugby World Cup 2019 is a tournament like no other. Asia’s first Rugby World Cup has captured the imagination of Japanese and fans around. It kicks off by a match between Japan and Russia on 20 September. Qualified 20 national teams compete through having the 48 enthusiastic matches in 12 cities from North to South. Final match held on November 2 decides the World number one in Yokohama.

Tokyo also is gearing up to host the 2020 Olympics and Paralympics. Tokyo 2020 will see over 15,000 athletes from 207 nations participate in what will be the most innovative, inclusive and inspiring Olympics yet. The world’s best athletes will arrive in Japan for the games starting on July 24, 2020 with a spectacular opening ceremony, and would run until August 9. Shortly afterward, the Paralympic Games will begin on August 25 and end on September 6. There are 33 Olympic sports and 22 Paralympic sports which will be held across 43 cities all around Japan.

Furthermore, in 2020, the world’s first Nintendo-themed park opens in the Universal Studio Japan. “Super Nintendo World” features Nintendo’s legendary worlds and characters, presenting the exciting world of Nintendo, such as an all-new “Mario Kart” attraction. In 2022, Tokyo DisneySea opens the newest theme port, “Fantasy Springs”. It consists of three areas inspired by Disney films that are loved by guests of all ages – Frozen, Tangled and Peter Pan. The four attractions, three restaurants, and one new hotel will also be opened in Fantasy Springs.

In the past, foreign travelers focused on Japan’s “Golden Route,” of Tokyo, Hakone/Mount Fuji, Kyoto/Osaka. Today’s clients are now demanding one-of-a-kind experiences such as seasonal festivals or time-sensitive attractions like the annual cherry blossom season. Here in the UAE, it’s a peak travel season to Japan in cherry blossom months, i.e. late March to early April.

Furthermore, Japan has solidified itself as a top tourism destination, with a wide appeal for both corporate and leisure clients. New digital marketing and public relations initiatives – including the 2018 Enjoy My Japan global campaign – have been put in place. Now, summer in Japan is full of fireworks, festivals and fun in the sun. Although, across much of Japan the summer is characterized by hot and humid weather, many locals opt for cooler climates near the ocean or up in the mountains when taking refuge from the heat.

Japan’s art, design and architecture are enjoyable for all tastes, as it blends both the ancient and the modern styles. The 21st Century Museum of Contemporary Art in Kanazawa holds everything that is modern, while The National Museum of Art Osaka in Osaka or the Tokyo National Museum would offer a perspective on older things. If one is visiting specially for a deeper understanding of the Edo period (1603–1867), pop-artist Katsushika Hokusai and his ukiyo-e wood block prints, one must go to the Hokusaikan Museum in Nagano Prefecture.

Even buildings in major cities offer architectural inspiration, and therefore simply roaming around in the streets of Japan gives one a feeling as if they are browsing a design museum. One would discover structural surprises at every turn while going to the cavernous Tokyo Station or the Mikimoto 2 or Prada buildings in upmarket Tokyo districts. However, if one wishes to visit actual design museums, then one would find Tokyo’s 21_21 Design Sight or the Archi-Depot Museum acutely interesting.

Japanese rousing culture may be experienced everywhere in the country, as it is reflected not only through the country’s ancient shrines and temples, but also in the trendy streets of Harajuku, at a friendly izakaya, or at a lively festival. One may even stay at a temple for a taste of temple life, or take a walk through one of the country’s ancient trails, or even get creative with a traditional craft at a local studio. Longlasting memories may be created while visiting traditional Japanese theater, avant-garde art installations and local festivals ranging from the regal to the raucous.

Matsuri in Japanese, meaning festivals, are an innate part of Japan’s culture. Some are small and peaceful, and others are large and fiery. During summers, Japanese like to light up the skies with spectacular, colorful displays through hanabi in Japanese, meaning fireworks. Some festivals such as the Gion Festival in Kyoto or the Aomori Nebuta Festival in Aomori would reveal the traditional aspect of Japan.

During winters, festivals include anime characters, historical and political figures, and famous architectural wonders, which are carved into snow and ice, and lanterns are lighted throughout the paths that are also lined with igloos. The Sapporo Snow Festival and the Nozawa Fire Festival are popular in winters. During spring, festivals include flowers, as spring is also the season of cherry blossom and other flowers. During immensely fulfilling spring festivals such as the Hirosaki Cherry Blossom Festival and the Kakunodate Cherry Blossom Festival, one must enjoy the food, drink and friendly atmosphere under trees, in parks, around castles, and along rivers.

During fall or autumn, momiji in Japanese, meaning the red maple leaves, dominate the outdoor festivals. Fall festivals are generally held around temples and shrines, such as the Fujiwara Autumn Festival in Hiraizumi, and the Kawagoe Festival, and showcase different areas’ history with historical parades, noh (skill) performances and seasonal food. During autumn, international events such as the Tokyo International Film Festival, Tokyo Motor Show and Tokyo Comic Con are held.

Japan boasts of several world heritage sites such as Himeiji Castle, Hiroshima Peace Memorial, and the historic villages of Shirakawa-go & Gokayama, and several more. All of them offer you deeply interesting examples of Japanese history. Aizuwakamatsu in Fukushima Prefecture is known as the land of the samurai, and Tsuruga Castle also showcases samurai culture. For ninja fans, one must visit the village of Iga Ueno in Mie Prefecture, or the Koka region in Shiga Prefecture. The southern islands of Okinawa are famous for the stone walls of the long-lost Ryukyu Kingdom, where one may discover extraordinary artistic, musical and culinary traditions. Coastal regions of Tokyo help visitors enjoy stunning beaches and saw-toothed coastline. Those who like trekking may go deep into the mountains. A trek to the top of Tokyo’s highest mountain – Mt. Takao – takes a day from the capital, while those who have several days to spare may walk the pilgrimage routes that wind through the Kii Mountain Range in western Japan. Other attractions include bubbling, geothermal waters at Japan’s many hot-spring resorts. A soak in the warm waters is a dip into traditional Japanese culture, and offers relaxation for body and soul. One may visit the mountains of central Japan, or down south to the island of Kyushu and relax in rocky baths overlooking the ocean or in high-class mountain retreats. Japan’s deep-rooted tradition of craftsmanship has led to worldfamous Japanese products that are of the highest quality in the world. Japan offers you all kinds of soulful experiences: lovingly brewed sake and prized porcelain that would remind you of the centuries-old crafting style, modern gadgets and fashion. Japan is for all, young and old, traditional and modern!