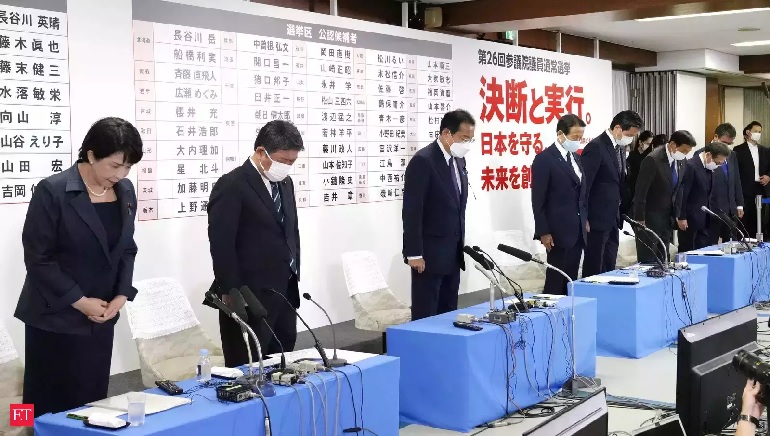 Japan’s ruling party and its coalition partner scored a major victory in a parliamentary election on Sunday.

The Liberal Democratic Party and its coalition partner Komeito lifted their combined share to 146 in the 248-seat chamber- much more than the majority — in the elections for half of the seats in the defenseless upper house.

With such a monumental victory, Prime Minister Fumio Kishida stands to rule uninterruptedly until a scheduled election in 2025. This would let Mr. Kishida focus on long-term policies such as national security, his “new capitalism” economic policy, and his party’s dearly treated goal to bring changes to the U.S.-drafted postwar pacifist constitution.

Mr. Kishida welcomed the major victory but wasn’t too happy, given the assassination of former Prime Minister Shinzo Abe loss and the arduous task of maintaining party unity without him. In press interviews late Sunday, Mr. Kishida said, “Party unity is more important than anything else.” He said the reaction to COVID-19, Russia’s war on Ukraine, and rising prices will be his main focus. He also said he would gradually work on reinforcing the country’s national security and a constitutional amendment.

Mr. Kishida and senior party legislators paid respect to Abe by observing a moment of silence at the party election headquarters. Abe, 67, was killed during a campaign speech in the western city of Nara on Friday.