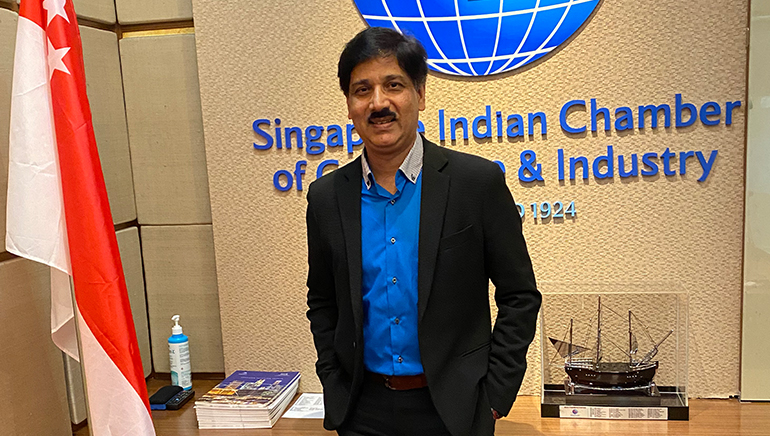 Maneesh has been based in Singapore and various countries in Asia Pacific for the past 2 decades. He is a global citizen who has worked in several multinational firms spanning 10+ countries, including the US, Saudi Arabia, Dubai, Singapore, Japan, China, Indonesia, Malaysia, and India. He is an Engineering Graduate with a Degree in Electronics & Telecom and is also a PGCGM (Management graduate) from the Indian Institute of Management (IIM), Calcutta, (India). Not only does the leader has a strong academic background, but also has a practical and straightforward attitude towards business matters. His sharp vision and diverse skill set enable him to execute his plans flawlessly.

Over the course of 28 years, this dynamic leader has amassed a wealth of experience in key leadership roles such as Chairman, COO, Group CEO, and Technology Head in various prominent global corporations, viz., Philips, IBM, Olivetti, Spice International, and so on. Currently, Maneesh is the Director and Board member of Digilife Technologies Limited (SGX Listed) which was formerly known as SEVAK Limited, a 250 million dollar plus listed company in Singapore that operates in the areas of telecommunications, IT/system integration, and electric vehicles. He joined SEVAK Limited as Group Chief Executive Officer in 2010 and was promoted as Executive Chairman in September 2019 by the Board. His role as Chief Executive Officer of Sevak Limited ended in March of 2020 when he handed over the Chairmanship to the promoter group and was given the additional key responsibility of Chairman and Group CEO of Affinity Capital Pte Limited, a 100% owned subsidiary of the Indonesian company Seluar Global Networks, which operates a S$ 250 million telecom business in Indonesia. Maneesh also served on the boards of over 10 subsidiaries of SEVAK Limited. He serves on the honorary board of Global Schools Foundation, a 15000 students’ nonprofit organization that holds a special place in his heart. He has been the Group CEO and Director of Sevak Limited, a Main Board – SGX listed firm, for over 10 years.

As the linchpin of the company, he is wellversed with the SGX listing standards, MAS guidelines, and all International business and financial compliance rules governing how to conduct multi-country trade.

SHIFTING FROM INFORMATION TO INNOVATION

To prepare for the future EV innovation and revolution in autonomous electric vehicles (AEV), Maneesh played a pivotal role in shifting the company’s focus from “Information to Innovation.” The proactive chief also took the initiative of reorganizing his company with the help of his shareholders and promoters. Consequently, an additional innovation unit within the company was entrusted with investigating emerging technologies. This spawned a new business unit, Singapore Electric Vehicles Pte Limited (a subsidiary of SEVAK Limited), one that would go on to become a pioneer in Singapore and ASEAN. His role in propelling the new business unit to become Singapore’s first 100% commercial electric vehicle fleet company deserves special mention. Maneesh is also the one behind the invention of Singapore Vehicle Advanced Keylogger (SEVAK) Software, which is a product of his ingenuity. Developed by an internal engineering team, it has been architected, coded, developed, and deployed on the cloud as a SaaS. As a strategic leader, he has overseen the acquisition, integration, transition, and growth strategies of at least 10 projects for his group firms. He was also in charge of the $250 million Affinity Group and the Selular Group (an Indonesian company that is a subsidiary of SEVAK Limited).

Maneesh has been recently elected as Vice Chairman of Singapore Indian Chamber Of Commerce (SICCI) in 2020, and the Chairman of Committees leading “Incubation and Startups” and “Bilateral and Multilateral Trade relations” for Singapore via SICCI. He is the Treasurer and a member of the Executive Committee of SGTech formerly known as Singapore Infocomm Technology Federation (SiTF) and a member of Singapore Institute of Directors (SID), Singapore Computer Society (SCS), Singapore Venture Capital & Private Equity Association (SVCA), Singapore Business Federation (SBF) and Singapore Manufacturing Federation (SMF). He is also a Hon Governing Board member of Global Schools Foundation at Singapore. Maneesh was also involved in key events as a core committee planning and executing member for G2G (Singapore and India) large events, and bilateral trade and connectivity discussions, where both High Commissions were involved, and firms like SICCI and SGteck were also involved. He was a part of a business delegation with SBF where Singapore PM also visited India in the year 2017. During the COVID-19 pandemic, Maneesh was a senior member of the Singapore Indian Chamber’s COVID Relief task force to raise funds and worked tirelessly to provide aid and support via Red Cross and the High Commission to various states and cities in India.

Maneesh believes in leading by example. When his company Sevak Limited plunged into losses in 2015, he became the first CEO in Asia-listed businesses to willingly accept S$1 salary. Consequently, many board members, as well as members of the management team, followed suit. With his unwavering efforts and tenacious spirit, he pushed the firm back into profit the following year and then off the watch list with clear audit opinions in consecutive years. Profits have been flowing since then and there’s been no turning back.

Sport has always been a driving force in Maneesh’s life. He is an ardent cricket player and has represented State teams in U-22 Col CK Naidu Trophy. He has also captained College and University teams in India, viz. R.D.V.V. University team in Jabalpur (India). He also captained Ceylon Sports Club Singapore and the Singapore Indian Association during his 15 years of playing Division 1 cricket in Singapore. He says, “Sport trained me how to lead, and I found myself at ease in that role.” For him, the analogies between sport and business are quite relevant. A hobbyist at heart, he has a 4-year diploma in the percussion instrument called Tabla. He also has a Certificate in Film Production & Planning from Singapore Media Academy.