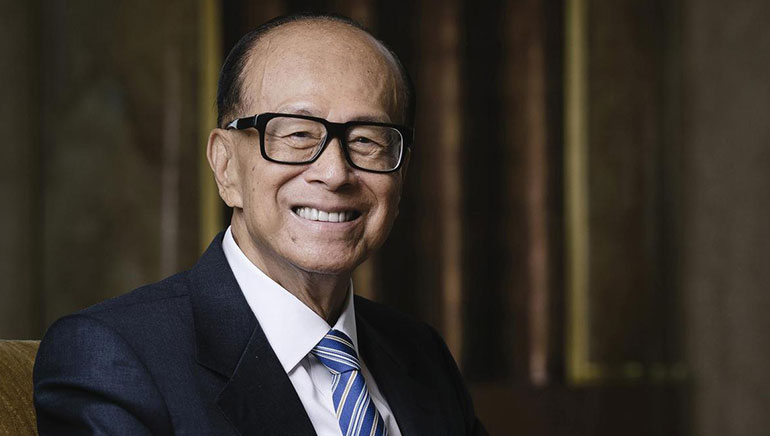 As the chairman of CK Asset Holdings and CK Hutchison Holdings, Mr Li is efficiently spearheading the organizations even at a ripe age of 89 and employs around 310,000 people in more than 50 nations. His personal
wealth is more than US$37.7 billion, making him one of the richest persons in Asia. Attributing the success of Cheung Kong, which he started with only about $50,000, to a willingness to learn the latest industry trends, Mr Li asserts that “the correlation between knowledge and business as the key to success is closer than ever.”
Even though Mr Li discontinued schooling at a young age and never received a university degree, owing to unfavorable circumstances at the personal front, he has always been a voracious reader and attributes much of his success to his ability to learn independently. This is quite explicit from the fact that he completed Cheung Kong’s accounting books in the company’s first year himself with no accounting experience as he simply taught himself from text books. Popularly known in Hong Kong as “Superman Li” for his ability to build empires out of ordinary businesses, Mr Li sold The Center in Central for HK$40.2 billion (US$5.14 billion) to a consortium of investors in what could be the world’s most expensive property transaction. He’s now become a major investor in disruptive technology
– one of the first big investors in Facebook, and his most recent big acquisition being the British telecom company, O2, which he purchased for $15 billion and has also invested in Siri and Spotify. According to Mr Li, it took him five minutes in December 2007 to decide to invest in Facebook, even though it barely had any revenues. His investments in stocks and start-ups have also performed well; a gaming hardware maker backed by Mr Li – Razer – was one of the most sought after initial public offerings in Hong Kong in 2017 and its share price shot up 18 per cent in its trading debut.

TOILING HIS WAY TO SUCCESS

Saddled with financial responsibility from a young age, Mr Li’s early leanings are replete with sweat and toil as his family migrated to Hong Kong from southern China during the Sino-Japanese war, and his father passed away after a long battle with tuberculosis. From being employed in a factory at a tender age of 16 to opening his own factory at the age of 22 and within a few years achieving great success as a manufacturer, property developer, business magnate, and investor — Mr Li is an alluring protagonist of an incredible rags-to-riches story.

His sincerity and deep commitment for his family can be assessed from the fact that he sent 90% of his pay to his mother for almost four years during the Japanese occupation of Hong Kong.

Perhaps his early success as a breadwinner taught him generous values which have made him famous for his philanthropy today.

“PERHAPS ONE OF THE MOST IMPORTANT FACTORS WHICH HAVE CONTRIBUTED TO HIS SUCCESS IS THE PASSION WHICH HE FEELS FOR HIS WORK, AS HE PUTS IT, “THE MOST IMPORTANT ENJOYMENT FOR ME IS TO WORK HARD AND MAKE MORE PROFIT”

Being clearly influenced by his experience of working as a child, Mr Li asserts that “It doesn’t matter how strong or capable you are; if you don’t have a big heart, you will not succeed.” Showing promise as a leader and visionary, he opened his first factory in 1950 at a young age. The factory, Cheung Kong Industries, manufactured plastic flowers as he had rightly anticipated that plastics would become a booming industry.

Mr Li’s first visionary move was with plastics, though he was ahead of the curve again when he moved into property development in 1979 with the acquisition of Hutchison Whampoa – this set the stage for him to become a major real estate tycoon before Hong Kong’s global boom. Despite the fact that he is largely recognized as a property developer, his companies control 70% of port traffic and most electric utilities and telecommunications in Hong Kong and also owns a major stake in Husky Energy, a Canadian company. By diversifying his wealth and power across different industries and geographic areas, Mr Li exhibits that he is daring enough to learn and experiment in new areas. Arranging his holdings strategically to ensure his security despite the state of the economy, Mr Li is adept at anticipating economic highs and lows, as he himself puts it, “I do not get overly optimistic when the market is good, nor overly pessimistic when the market is down.”

The thriftiness which he maintained during his childhood has been successfully carried over into his current career as he adheres to a no-debt policy indicating that his companies operate using as little debt as possible, and he himself purchases all of his real estate using capital, in order to maintain zero personal debt. His good financial habits have given him the freedom to treat investment in technology as a “high stakes hobby,” through Horizons Ventures Ltd and his longtime friend, Ms Solina Chau, runs the tech fund.

Besides being one of the first big investors in Facebook, Mr Li has more recently invested in a startup that aims to replace eggs with a plant substitute as he believes in investing in technology that he considers as “disruptive” and would thereby provide a more cutting-edge to his holdings. This approach is consistent with his constant innovation in his businesses. Perhaps one of the most important factors which have contributed to his success is the passion which he feels for his work, as he puts it, “the most important enjoyment for me is to work hard and make more profit.”

A MAN OF HIS WORD

From his humble beginnings as a teacher’s son, a refugee, and later as a salesman, Mr Li provides a lesson in integrity and adaptability and through hard work, and a reputation for remaining true to his internal moral compass, he was able to establish an empire. Besides knowledge and industry insight, he considers loyalty and reputation to be keys to success, as he puts it, “Anytime I say ‘yes’ to someone, it is a contract.” A testimony to this fact is an incident when he once turned down an offer that would have given him an extra 30% profit on a sale (and would have enabled him to expand his factory) because he had already made a verbal agreement with another buyer in the year 1956. He still carries this principle of loyalty today, even when it amounts to losing money.

Revered as one of Asia’s most generous philanthropists, Mr Li has donated over US$2.56 billion to charity and various other philanthropic causes. Mr Li considers Li Ka-shing Foundation as his third son, which is working on its mission of “reshaping destiny through education and seeking efficient initiatives that can forever help those in need.” The Foundation is also serving humanity through its healthcare initiatives and has served 17 million patients comprising terminally ill cancer patients, cataract sufferers, patients belonging to the rural areas and amputees.