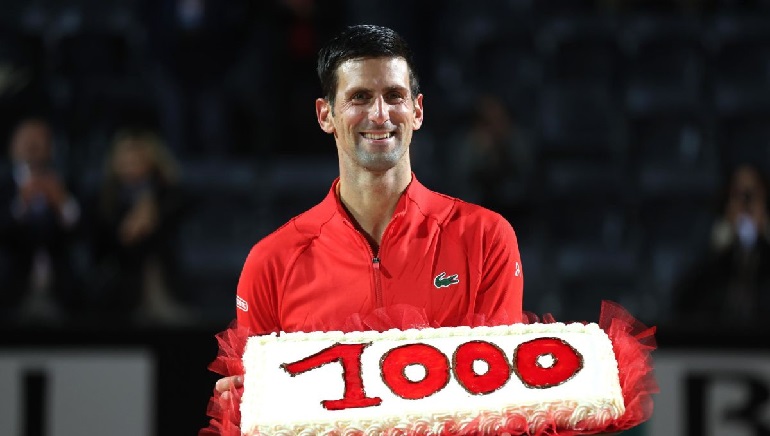 Novak Djokovic, the No. 1-ranked men’s tennis player in the world, became the fifth man in history to reach 1,000 Tour wins after winning the Italian Open Semi-final against Norway’s Casper Ruud.

The other 4 men to have reached the historic milestone are Roger Federer, Rafael Nadal, Jimmy Connors, and Ivan Lendl. The 34-year-old Tennis champ had won his first tour-level match in 2004 and since then has emerged as one of Tennis’s all-time greats. The 20-time grand slam winner celebrated the occasion by cutting a cake that was presented to him by the tournament organizers. Djokovic won his 1,000th contest in 1,203 matches, making him the fourth-fastest to reach the milestone.

In his on-court interview with ATP, Djokovic thanked the tournament and the crowd for celebrating his achievement. He added that in the last couple of years he witnessed the celebration of the same milestone by Roger and Rafa and that he was eager to get to the milestone as well.

Djokovic, who is eyeing his first title of the season and what could be his 1001st win, will take on Greek world No. 5 Stefanos Tsitsipas in the Italian Open final on Sunday.