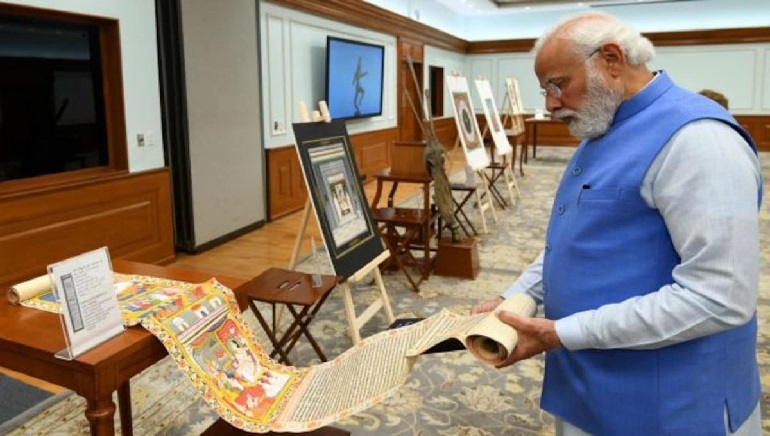 PM Modi said, “I would like to especially thank you for taking the initiative to return ancient Indian artefacts. Among them are hundreds of year-old idols and pictures illegally removed from Rajasthan, West Bengal, Gujarat, Himachal Pradesh along with many other Indian states”.

The relationship between the nations is strengthening and the move is termed historic. Mr Modi had inspected the artefacts that included several paintings and sculptures which are made up of stone, marble, brass, bronze and paper.

The origin of these paintings and sculptures can be traced to several corners of India which are broadly ranged into six categories. The themes are- Shiva and his disciples, Worshipping Shakti, Lord Vishnu and his forms, portraits and decorative objects, and Jain tradition. The artefacts are from Rajasthan, Gujarat, Madhya Pradesh, Tamil Nadu, Uttar Pradesh, Telangana, and West Bengal which date back to the ninth to tenth century CE.

Earlier, during Mr Modi’s visit to Australia, a 900-year-old Shiva sculpture was returned by the former Australian prime minister Tony Abbott. The sculpture was allegedly smuggled by the infamous art dealer Subhash Kapoor.