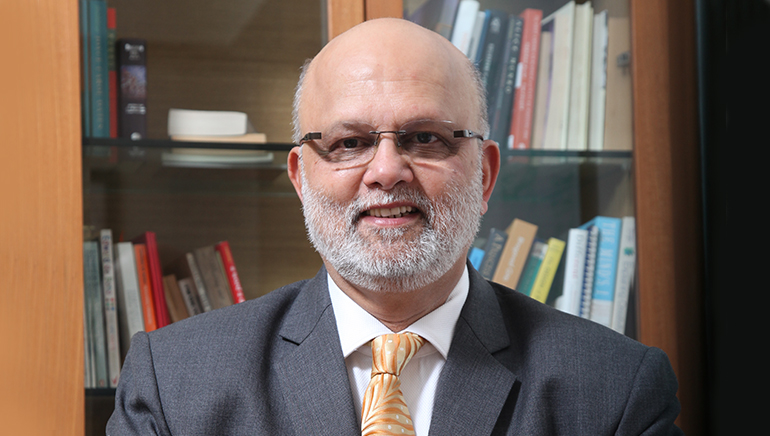 Dr. Pramod Chaudhari started Praj Industries nearly 40 years ago with a humble dream to build something innovative that would contribute to the making of a modern India. What started off as an entrepreneurial venture four decades ago, is today India’s most successful company in the field of bio-based technologies and engineering with presence in more than 100 countries across all five continents over the world. Praj is focused on the environment, energy, and Agriprocess industry.

Bio-MobilityTM and Bio-PrismTM are the mainstays of Praj’s contribution to global Bioeconomy. Bio-MobilityTM platform of technologies envisages utilization of bio-based resources for production of low carbon transportation fuels across all modes of mobility namely Surface, Air and Marine. Bio-PrismTM portfolio comprises of technologies for production of renewable chemicals and materials (RCM).

RCM produced from bio-based feedstock, are sustainable alternatives to products made from fossil resources. Praj Matrix, the state-of-the-art R&D facility, forms the backbone for the company’s endeavors. The zeal of working toward making the world a better place has been at the heart of all his efforts and still continues to fuel the fire.

FIRMLY GROUNDED IN VALUES AND GUIDED BY ETHICS

Dr. Chaudhari is an IIT Bombay alumnus in Mechanical Engineering (1971) and also holds an advanced management degree from Harvard Business School (1995). After graduating from his alma mater, he tried the usual route of working with the MNCs and building a corporate career. But, his dream was bubbling inside so in 1983, he gave his all to his venture – Praj Industries.

The organization started as a supplier of ethanol plants and today it is one of the most renowned socio-economic ventures with a wide range of sustainable solutions for bioenergy, high purity water, critical process equipment, breweries and industrial wastewater treatment. Owing to his foresight of creating a business in ethanol and scaling it to a level that Dr. Chaudhari has, he is often referred to as the ‘Ethanol Man’ in the industry circles.

Dr. Chaudhari had spent some time in his childhood near sugar industries and that is when he developed an interest in agri processing. He founded Praj Industries with a motive to support farming community.

“Right from the beginning, as a proponent of sustainability I had endeavored to strike a balance between three P’s namely Planet, People and Profit,” said Dr. Chaudhari. His one true belief is that the 3 P’s are a perfect formula for sustainability. As an entrepreneur and a leader, innovation is what drives him. In the early days of Praj, Dr. Chaudhari had adopted the approach that innovation would always be the growth driver. He personally ensured that this culture was kept afloat at Praj in their day-to-day functioning as well. The company has structured programs, innovation awards and competitions to foster a culture of innovation. The company also has a dedicated R&D center called Praj Matrix which is a hub of new ideas. Creative problem solving is another intrinsic part of the culture promoted by Dr. Chaudhari. He also holds problem-solving competitions at renowned colleges, where he tries to identify talent and encourage students to consider careers in industrial biotechnology and green chemistry. This is not just business, Dr. Chaudhari is working to change mindsets about biotechnology as a career and raising awareness about the industry.

LEAVING A TRAIL OF GLORIOUS AND NOTEWORTHY ACHIEVEMENTS

Dr. Chaudhari is one of the most respected and recognized professional in the industrial biotechnology field. One can’t talk about biofuel and not take his name. His consistent efforts and progressive work have been recognized globally many times. He was recently awarded the prestigious ‘George Washington Carver Award 2020’ by BIO-Impact, Washington DC, USA – he became the first Indian to receive this global honor. He was also bestowed with ‘D.Litt.’ by Tilak Maharashtra Vidyapeeth (TMV) for his exemplary contribution to the Biofuel Industry worldwide, and for establishing & institutionalizing a quality benchmark of Indian products & services at global level. He has previously been named amongst the ‘Globally Top 100 People’ in BioEnergy Industry by USA-based publication, ‘Biofuels Digest.’ Dr. Chaudhari has also been awarded the prestigious BioSpectrum Leadership Award for his extraordinary work in spreading the cause of biofuels in the past three decades. Under his able guidance, Praj Industries has also been the recipient of many industry awards. Last year, Praj Industries was ranked first among the “Best Places to Work in the advanced bioeconomy 2020” by ‘Biofuels Digest’. Biofuels Digest has also ranked Praj 2nd in a list of world’s 50 hottest companies in global bioeconomy for 2021 in low carbon fuels and renewable chemicals category. Besides, Praj secured 3rd ranking in the newly-introduced biodesign and engineering category. It has also been named the ‘Bio-Excellence Award’ by Government of Karnataka in the category of Industrial Bio-tech Sector consecutively for three years. These and many other premier industry awards and global recognition are testimony to the fact that Dr. Chaudhari is not only working tirelessly for a better world, but also ensuring the change begins right at his doorstep with his team and employees.

MAKING A POSITIVE IMPACT ON THE WORLD

In his journey as an entrepreneur and thought leader, Dr. Chaudhari has also ensured he extends his passion for social causes beyond his core business. He always believes in giving back to the society. In 2004, he established Praj Foundation to give an expression to all the efforts that he and his organization are taking towards social impact activities. Praj Foundation closely works with various NGOs and institutional partners on multiple projects in water conservation, education and preventive healthcare. They also conduct awareness drives to encourage more people to be part of the movement towards sustainability and betterment. ‘‘When you can do the common things in an uncommon way, you will command the attention of the world,” goes a famous quote by Dr. George Washington Carver. Dr. Chaudhari is testament to this quote. He chose one of the most underrated industries and made a huge impact. He put India on the world map and also became an inspiration to every individual who wanted to work in the biotechnology industry.