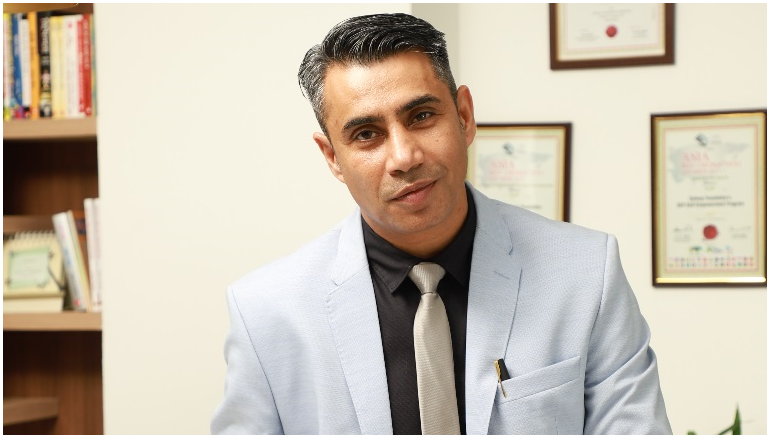 The Founder-Director of Glaze Trading India Private Limited, Mr. Sanjeev Chhibber always believed in venturing into the lesser-known territories and embrace novel, innovative initiatives to challenge the existing paradigms of business. With the same spirit and a rockstrong determination to take the Indian direct selling business to global recognition, he set up Glaze in the year 2003, along with Mr. Chetan Handa.

In less than two decades, the company has truly come on its own and is one of the top players in the sector. Today, there are more than 40 lakh independent distributors across the country, and more than 256 franchisees working to fulfill their inspired dreams under Galway Business. Mr. Chhibber further plans to establish an extensive network globally and offer interesting business opportunities to people of diverse social and ethnic backgrounds. He works day-through-night to achieve all his dreams and reckons that no success comes without constant hustle.

A commerce graduate from the University of Delhi, Mr. Sanjeev Chhibber had started his career as a distributor in a little known direct selling company. While working there, Mr. Chhibber felt rising in him a raging fire to revamp the industry. Observing the work environment around, he built within himself a strong entrepreneurial spirit. He transformed himself into a motivational leader steadily and decided to build something of his own, which can redefine the way the industry was functioning back then in the time.

Mr. Chhibber knew that the road is not going to be easy but he nevertheless stepped on to it and established Glaze Trading India Private Limited with minimal capital and modest investments. However, with a strong will-power and a futuristic vision, he managed to create a growing enterprise. His zeal to succeed steered him to dream big, aim high, and make it happen. And that’s why, under his able guidance, Glaze is registering double-digit growth year-afteryear, since its inception. The company has gained a lot of popularity among the users for its flawless and impeccable services.

Apart from Glaze Trading, today, he owns and runs four more companies namely Sakshem IT Solution, Sakshem Exim, Ananya Herbal, Print Tech and independent E-Commerce division of Glaze viz. Galwaykart. Each of these has built a stellar reputation within their respective industries and has been growing exponentially.

Mr. Sanjeev Chhibber believes that all these glories wouldn’t have found their way to him if he had not been clear in his convictions. He had realized early in his career that long-term success can be attained only with a well-defined vision, mission, and values, the foundation of which must lie in fairness, trustworthiness, and respect while pursuing the path of innovation and differentiation. These are the very principles he relies on while making his space in the competitive market. The adherence to these fundamentals and a sustainable business model with roots firmed in the culture of people-to-people contact, and efficient linking of resources to solutions has enabled Glaze to outperform many of its competitors.

Mr. Sanjeev Chhibber’s inspiration has always been to stand on his own feet without leaning on anyone else’s shoulders for support. He is a self-made man who has full faith in the power of his own dreams and skills. According to him, drive, determination, and dedication have always driven his convictions.

He feels that partnerships are to make both parties self-sufficient than making them dependent on each other. With his businesses, he, therefore, tries to foster partnerships that can create a win-win proposition, which is long-lasting and sustainable throughout.

Another aspect of business that Mr. Chhibber is really passionate about is creating and sharing wealth through the promotion of micro-entrepreneurship as a sustainable business model. He is using the same for marketing and distributing of Glaze India products.

His focus remains on the less privileged sections of the society, located in far-flung areas, having diverse social and ethnic backgrounds. Under his companies, the versatile leader invites them to become business partners by offering them interesting opportunities that can help the company in the expansion of its networks and provides the committed brass of participants with minimal attrition but substantial training responsibilities.

DREAMING OF A GLORIOUS TOMORROW

Mr. Chhibber’s future vision is to make Galway one of the most trusted corporate brands in the domestic market for its offerings while foraying into the global market to make its presence felt internationally with best business practices. This will also involve the expansion of the product range and more investment in technology and heightened investment in research and development.

Another goal that Mr. Chhibber is dedicated to is giving back to society, which finds its echo in every company initiative of his. He is overseeing two programmes under his brand’s CSR activities: Self-Empowerment Programme (SEP) and Digitalya for digital education. For developing people spiritually, the Foundation runs SEP while Digitalya aims to provide free-of-cost training in informatics and computer basics to the people who have no or little knowledge of how to use computers.

SEP program has touched 1 lakh 56 thousand lives to date while 13 Digitalya labs in 8 states have educated 26 thousand plus ICB certified participants. Along with its 02 major programs, Foundation has been spreading smiles in the lives of disadvantaged communities by raising awareness as well as making voluntary contributions in the areas of child education, health, and welfare of the specially-abled people and organizing blood donation camps.