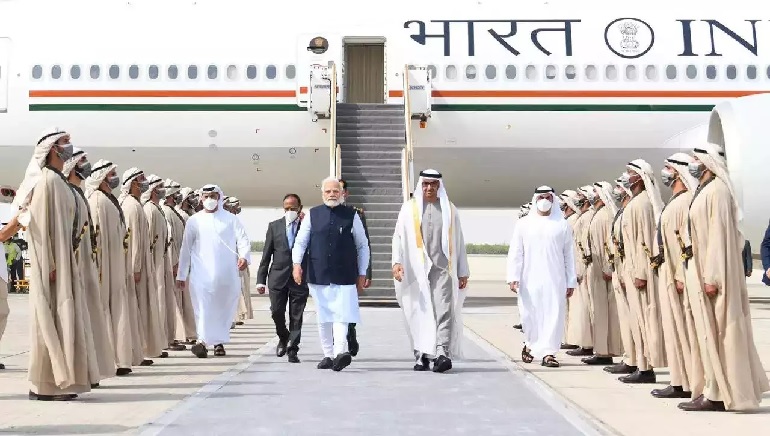 On Tuesday, Prime Minister Narendra Modi met Sheikh Mohamed bin Zayed Al Nahyan, the ruler of Abu Dhabi and president of the UAE, and conveyed his condolences on the death of the former leader of the Gulf nation.

Following the UAE leader’s election last month, this is their first meeting where Mr. Modi expressed his condolences to Sheikh Mohamed for the loss of Sheikh Khalifa, who died on May 13 at the age of 73 after a long illness. He expressed grief over Khalifa’s death, describing him as a visionary leader who improved India-UAE relations.

Following his participation in a productive G7 Summit in Germany, Modi arrived here for a brief visit. He interacted with several world leaders on the margins of the summit, addressing issues pertaining to global well-being and prosperity.

Ministry of External Affairs Spokesperson Arinfam Bagchi Tweeted, “In a special gesture, UAE President and Ruler of Abu Dhabi Sheikh Mohamed bin Zayed Al Nahyan, accompanied by senior members of the Royal Family, was at Abu Dhabi airport for the interaction with PM”.

Modi’s last trip to the UAE was in August when he received the UAE’s highest award, the Order of Zayed, conferred by the UAE president.