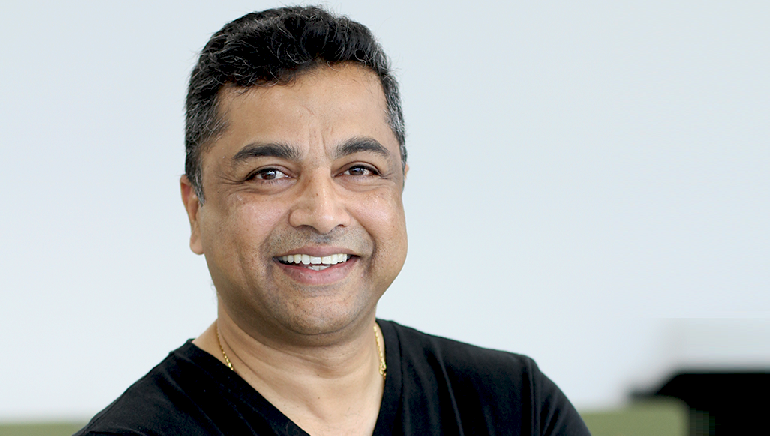 Mr. Satyan’s father owned a restaurant back in the day and as a kid, he used to spend a lot of time there. That was when his foundation of human values was laid. He believes that success is measured in terms of how many lives you affect and for him, the biggest assets were the people he worked and interacted with. It is with these set of values and beliefs that he ventured into corporate world at the age of 18.

Back in 1992, Mr. Sumesh started his career as a salesman. Over time he excelled in all the roles, but he also realized a thing or two about the working of many organizations. He learnt that majority of the small-scaledorganization leave very little room for the personal and professional growth of their employees.

The stakeholders of these companies were neither interested in the growth of the company norallowed their employees to feel fulfilled.While he did grow in ranks, he was often chastised for going out of his way to help his teammates or provide them with opportunities to grow. He soon realized that all of these companies disregarded the people they worked with.

The last straw came when he was ousted by a company where he had contributed through every high and low. It was that moment when he realized he would start his own company where people would never be undervalued.

A DREAM IS BORN

Mr. Sumesh had an agreement with his wife Ms. Suchi Nair that both of them will retire at the age of 45 and follow their passion from then on. The events of his job career timed perfectly with this plan and they both decided to start their own company in 2014 – Leisung Technologies.

The husband-wife duo bootstrapped this company from scratch. They decided to build an organization where financial achievements were only the result of a team that is inspired internally. In their organization people would always be supported. Under his leadership, Leisung Technologies has been growing from strength to strength. The firm is an AV Design, Integration & Solution Company headquartered in Dubai.

Leisung Technologies was started with the underlying mission to be the easiest company to work with for employees, customers, and partners and to create for customers the most compelling technology in meeting spaces.

Since his personal experiences at all his previous jobs had been demotivating, Mr. Sumesh wanted his company to be a place where nobody felt undervalued or taken for granted. For him, it isnot just an entrepreneurial venture but a change movement. He wanted to build a company where all team members respect each other and the customer.

The customers’ needs are understood in depth and solutions are provided based on what they want and not what the company is trying to sell. Mr. Sumesh started out looking to forge lifelong relationships, not just business transactions. It is a thin line to walk for a CEO since sometimes a profitable step is staring at you in the face but if that doesn’t align with your core values, you need to let it go. But that doesn’t bother Mr. Sumesh because he is here to build “the easiest company to work with.”

He leads his team with utmost sincerity and that’s what makes a true leader. Integrity and innovation form the everyday culture at Leisung. Mr. Sumesh doesn’t believe in policing his employees. Every day he works to build and sustain an environment which inspires all of his employees to learn, prosper and support each other.

As a leader, he tries to keep an ‘open door’ policy where his team members can come up to him to discuss professional or professional challenges and new ideas or even an improvement that they think will help the company be better. “We try to solve all problems together,” he says. His journey as a CEO has been one with many hurdles. Like every new company, he has had to prove their quality.

In the initial days there also were major cashflow issues, but he persevered and tunneled through those challenges to stay afloat and keep building his dream. Today, Mr. Sumesh proudly shares that his company supports 28 families; he has some of the top minds of the industry working with him and bit by bit he is building a workplace that will always value their employees and customers alike.

MARCHING TOWARDS A BRIGHT & GLORIOUS FUTURE

In the next 5 years, Mr. Sumesh aims to ensure a business that can support at least 1000 families. He plans to keep working on his vision of being the “easiest company to work with for employees, vendors, and customers.” It is his innate desire to ensure that everyone he and his company interact with is touched by their human spirit of oneness and helpfulness in every single task they undertake.

His future plans and goals are a refreshing change from the usual numbers and figures that most CEOs have for goals. In his endeavor, Mr. Sumesh’s family also supports him wholeheartedly. His wife heads the sales vertical at Leisung and his daughter handles the marketing function. With the help of an objective and open culture that he is building at his company, work-life balance has not been a problem for Mr. Sumesh ever. He has full faith in his employees and doesn’t believe in keeping tabs.

Mr. Sumesh is a new-age leader who is not building a company but a culture. He is bringing about a slow but steady change in how the whole employer-employee equation is viewed. He is setting the bar high when it comes to building an organization. He took it upon himself to create something he never got as an employee. His foundation and core beliefs are what set this leader apart from the rest.