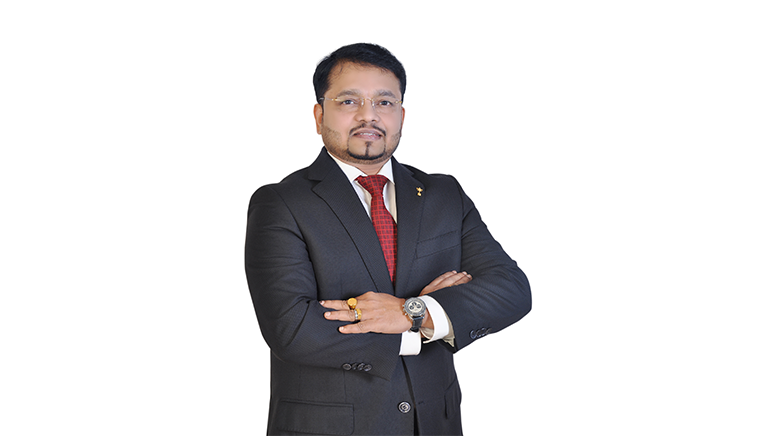 Born to Government employees, Syam Prabhu holds the traditional values of truth, honesty, and self-discipline very close, and centralizing his professional life around these virtues, he has established Aurion as an expert in international business consulting. Educated at Sainik School, he developed a determination to always win, never ready to settle in a comfort zone, and eager to do what coincided with his passion, through Aurion he has already incorporated more than 1200 free zone companies and 3000 offshore companies, without any hassles to the investors.

A Graduate in Law from the University of Kerala, he initially started working tirelessly as a jurist and lawyer in the Kerala High Court and District Courts, offering free legal consultation to the poor. He was not only instrumental in eradicating the anomalies present in the medical and engineering entrance examinations in Kerala, his efforts translated into a new dimension to the Fundamental Right in the Indian Constitution, which was developed in writ petition that read “Right to Education includes right to fair examination.” Having decided to expertly utilize his legal acumen combined with excellent public relations, he established Aurion.

Quickly reaching various milestones of success, he not only opened a branch in Dubai Airport Freezone by the side of the run-way, so international clients would found it easy to visit his office adjacent to the airport, he also got Aurion registered as a corporate service provider in all major freezones and offshore jurisdictions.

He takes active interest in the operations and management of his organization for optimum excellence. He has developed Aurion website in English, Arabic, Chinese & Russian, and has developed the mobile app in Android & iOS, whereby clients can get important relevant notifications. He has also been instrumental in developing customized Office Management System software so that each staff can have access to their area of activity and clients.

Being a powerful yet empathetic leader, he takes care of his team and incessantly instills confidence in them. He takes care that they have enough freedom to bring out the best in them, while offering security of job and financial incentives to them making them in turn affectionate to the company and passionate about the job. Also moving with the times, he is implementing block chain technology in his organization to expedite the process of incorporation and bringing efficiency.

Success and the Power of the Mind

Under his insightful leadership, Aurion is evolving a strategy to spread its wings to United States, Europe, Africa and Asia, as he wishes to establish franchises with the work model that suits to each country. His team of policy strategists have already earmarked 30 countries to distribute franchiseships.

Firmly believing that giving back to the society through CSR actually contributes to the overall growth of the organization, Aurion gives 50% discount to people with disabilities and senior citizens. They have also been sponsoring 150 poor children from fishermen community in Alappuzha, coastal state of Kerala, and to protect the environment, they are making use of digitalization, avoiding use of paper at all levels.