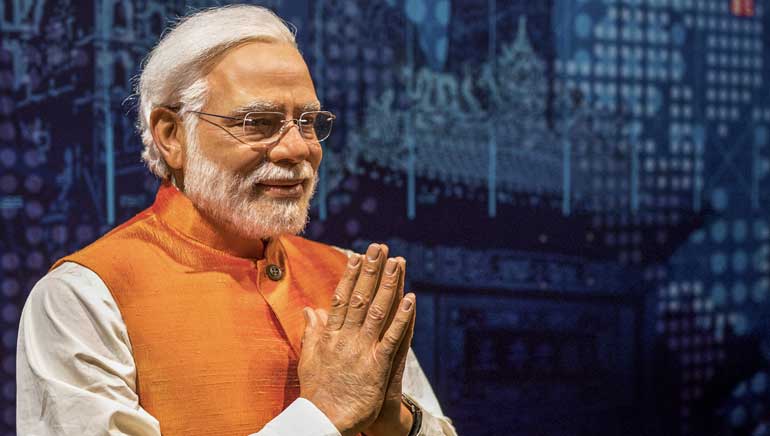 Narendra Damodardas Modi became the 14th and the current Prime Minister of India, after an impressive stint as the Chief Minister of Gujarat from 2001 to 2014. He belongs to the Bharatiya Janata Party (BJP), and is also a member of the Rashtriya Swayamsevak Sangh (RSS)
BY ANAM KUMAR

The story of Narendra Modi’s rise to become the most important person in India is really stupendous, as even after being born in a poor family of Gujarat, his resolve to do something great for himself and his country led him to move up in his political career, till he became the Prime Minister of the country.

Back in his childhood, he used to help his father sell tea as a child, and then even had a tea stall of his own. Impressed by the ideology and selfless work of the RSS for the good of the nation, he joined RSS at the age of eight.

Born as the third of six children to Damodardas Mulchand Modi and Hiraben Modi, he completed his higher secondary education in Vadnagar. Though he was an average student, he took an interest in debating and theatre.

He was engaged to Jashodaben when both were children; however, Modi didn’t accept their arranged marriage.

The spirit to do something for the country was so strong in him, that he renounced his family, even his wife, and started working full-time in regional and national politics. After renouncing his family, he travelled around India for two years. Later, he became a full-time worker for the RSS, which assigned him to the BJP. His hard work paid off and he kept on rising within the party hierarchy until he became its General Secretary.

He got a tremendous opportunity, when Keshubhai Patel’s public image was hit after the earthquake in Bhuj, and he was appointed the Chief Minister of Gujarat in 2001. He wasn’t even a Member of the Legislative Assembly, but was elected soon after. His policies as the Chief Minister of Gujarat led to a high economic growth in Gujarat and were praised by all and sundry.

Modi has also been praised substantially because of his efforts towards improving efficiency in the bureaucracy. Other praiseworthy steps taken by Modi include abolition of the Planning Commission and creation of Niti Aayog, Swachh Bharat Abhiyan, Digital India campaign, Make In India campaign, Pradhan Mantri Jan Dhan Yojana, Skill India campaign, etc.

Modi’s political success streak started with the win of BJP in the Ahmedabad municipal election in 1987, as he helped organise the BJP’s campaign and his planning played a major role in the win. Recognising Modi’s efforts, Shri L K Advani – who was the President of the BJP then – helped him become the organising secretary of the BJP’s Gujarat unit.

Modi quickly moved up the hierarchy in the BJP and soon became a member of the BJP’s National Election Committee, where he helped L K Advani in his Ram Rath Yatra of 1990, and helped Murli Manohar Joshi in his Ekta Yatra (Journey for Unity).

Taking advantage of Shankersinh Vaghela’ defection to the Indian National Congress and supporting Keshubhai Patel, he strategized and help BJP win the 1998 elections with an overall majority. Consequently, he was promoted and he became the General Secretary of BJP.

When Keshubhai Patel’s health deteriorated and there were charges of mishandling Bhuj earthquake of 2001, the national leadership of BJP started looking for someone who could take care of Gujarat administration, and Modi was selected to be the Deputy Chief Minister of Gujarat under Keshubhai Patel. However, Modi declined the position to L K Advani and Atal Bihari Vajpayee saying that either he was “going to be fully responsible for Gujarat or not at all”.

Consequently, he replaced Patel as Chief Minister of Gujarat.

Soon after, Godhra riots took place and Modi submitted his resignation at the BJP national executive meeting in Goa; however, his resignation was not accepted. So, Modi took an emergency meeting of his cabinet, and resigned to the Gujarat Governor S S Bhandari. Consequently, the state assembly was dissolved. In the ensuing elections, BJP won 127 seats in the 182-member assembly.

Thus, Modi became the Chief Minister of Gujarat a second time. However, he was severely criticised for his relationship with Muslims by domestic and global agencies, and he was even barred from entering the United States. The UK and the European Union also barred him as they felt his role during the Godhra riots wasn’t satisfactory. However, overcoming all challenges, Modi kept on rising as a leader in India, and very soon the UK and the EU lifted their bans. Obviously, after his election as the Prime Minister of India, all bans by any country were automatically lifted.

As Chief Minister of Gujarat, Modi worked for privatisation and also favoured a small government. He also reduced corruption in Gujarat during his second term as Chief Minister. He also developed financial and technology parks in Gujarat and because of his initiatives real-estate investment deals worth INR 6.6 trillion were signed during the 2007 Vibrant Gujarat Summit.

He also worked on the creation of groundwater-conservation projects, building check dams, regaining the normal groundwater levels in water-deficit districts, improving production of genetically modified cotton, and improving public irrigation measures through projects such as Sardar Sarovar Dam. He encouraged industrial investment as he invited Tata Motors to open their Nano car manufacturing plant in Gujarat after a popular agitation had forced the company to move out of West Bengal. This move encouraged several other companies, which also invested in Gujarat.

In September 2013, Modi was projected as the BJP’s candidate for Prime Minister. He campaigned for elimination of corruption, and bringing 360-degree development in the entire country. His strategy found support among young Indians and the middle-class, and his Gujarat model of development became very popular. As a result, BJP won the general elections with 282 seats in the Lok Sabha, becoming the first party to win a majority of seats on its own since 1984.

After he became the Prime Minister, India considerably improved its Ease of Doing Business ranking by the World Bank. His foreign direct investment policies improved foreign investment in the country, and together with other economic reforms, helped the economic growth of India jump to 7.5 percent, making it the world’s fastest-growing major economy.