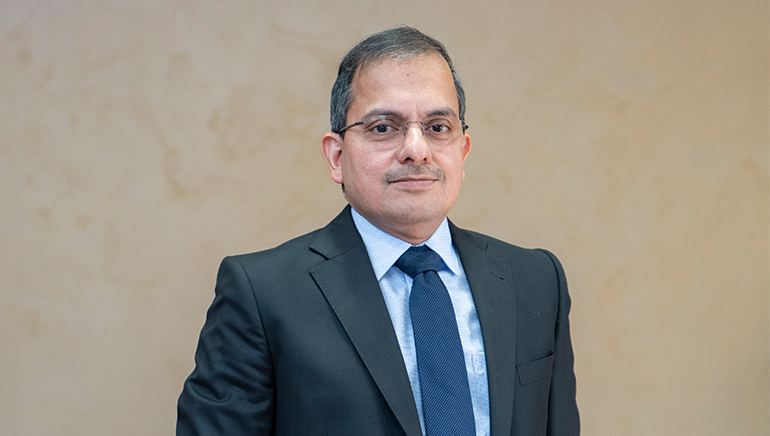 Mr. Ganesh started his career with State Bank Group and learned all the basics and built a solid foundation in banking and finance. He worked diligently from the ground up and rose through the ranks. An alumnus of MIT-Sloan School of Management, Boston, US and the Indian Institute of Management, Calcutta (IIM-C), Mr. Ganesh holds a string of post-graduate, graduate and diploma qualifications, which are a testimony to his solid academic background. He has also taken up professional trainings in Executive Management from Ross School of Business, University of Michigan (USA) and successfully completed the Leadership Development Programme at Wharton School, University of Pennsylvania (USA). His penchant for knowledge and continuous self-improvement is strong that he recently completed his Advanced Diploma in Non-Executive Directorship from Financial Times (FT), London. It is his collective academic knowledge that he combined with real life scenarios at his various roles that made him a name to reckon within the industry. No wonder when the Oman Arab Bank, one of the oldest banks in the Sultanate, wanted to rewrite their story, they hand-picked him to script it.

Mr. Ganesh credits his long stint in ICICI Bank for his Management and Leadership style. Working in various capacities including as Corporate Dealer, Regional Head of Corporate Banking and Head of Trade Finance across major Indian cities like Mumbai, Chennai and Bangalore and later as the Alternate CEO at ICICI Bank, Hong Kong, Mr. Ganesh is very proud of his ICICI lineage. ICICI Bank has always been the training ground for many CEOs in the financial sector both in India and abroad.

Mr. Ganesh joined Ahlibank SAOG, a public listed entity in Muscat Stock Exchange, in the first quarter of 2008 and it was his first experience in the GCC. At that time, Ahlibank had just got the license to convert from a single product mortgage lending firm to a full-fledged commercial bank. “Except for the banking license, it was almost equivalent to setting up a new bank and came with its own set of challenges and excitement,” he says. Within a few months of him joining Ahlibank, Lehman Brothers collapsed in the wake of the subprime crisis and then came the ‘Arab Spring’. For a banker there hadn’t been a more difficult time. It was the true test for Mr. Ganesh to set up the ‘new’ Ahlibank under the given circumstances. Under his astute leadership, Ahlibank navigated the rough times successfully. His well-thought policies and realistic vision helped Ahlibank to cement its position as one of the leading commercial banks in Oman and was ranked first in the OER Magazine’s ‘Best Banks in Oman’ Survey, for four consecutive years
from 2012-2015.

After his stint at Ahlibank, he moved to Dubai when he joined Ahli United Bank Ltd (AUBL), UAE as the CEO and Executive Director. He was once again handpicked by AUB BSC Board for the job and challenged to lead the operations of the bank from scratch in a new market, strategize branding, develop customer base and drive significant revenue.It was a big challenge to set up the bank through organic growth by applying for fresh license, obtain regulatory approvals, design and develop new systems and procedures, operationalize systems and much more. Mr. Ganesh rose upto the occasion again and under his leadership the bank achieved break-even point in the first year. In a completely new geography, he proved his mettle and created a new brand identity for AUBL, as its CEO for almost 6 years.

His most recent stint has been at the Oman Arab Bank (OAB) where he joined as the CEO in 2021. OAB is an Oman Listed Bank, with 45 years of history and employee strength of around1400. It is one of leading commercial banks in the Sultanate. The bank has been going through a lot of challenges due to the pandemic, regional issues and some legacy-related problems. The areas of work include building a high performance work culture, cost optimization, stressed assets management, digital transformation and more importantly, developing the next generation of leaders.

A LEADER FOR THE PEOPLE

Mr. Ganesh has proven that he is a high-performance leader capable of driving business through critical growth phase delivering consistent growth through excellent employee engagement and customer management. His one motto and lesson for his teammates is – ‘be simple in your communication and humble in your behaviour.’

Banking is a people-facing industry and one has to develop key people skills to navigate various kinds of problems the customers bring to you. Mr. Ganesh has been dealing with people since the very beginning of his career and credits his people skills to his early days at the ICICI Bank. He truly believes that the one trait that holds more value than anything else is integrity. As a banker, you’re always dealing with other people’s money and for that you have to always hold on to your integrity and humility. His leadership style is simple – listen to everyone and understand all perspectives. He firmly believes that what a leader requires is the ability to manage a team efficiently and effectively. Lead the team by a role-model approach – show them how it’s done, don’t tell them. It is this entrepreneurial mindset and teamwork capabilities that have made him one of the most respected professionals in the sector.

Hailing from humble origins, Mr. Ganesh had seen some very trying times while growing up. It is now his dream to inspire kids from similar background to dream big and work hard to achieve those dreams. Calling books as his first love, Mr. Ganesh believes that each book one read is equivalent to experiencing one full life cycle. Asked about the cultural challenges faced while working in 5 different geographies -India, Hong Kong, Oman, UAE and Bahrain, Mr. Ganesh sums up, ‘Every culture respect and recognizes honesty, humility and competence.’