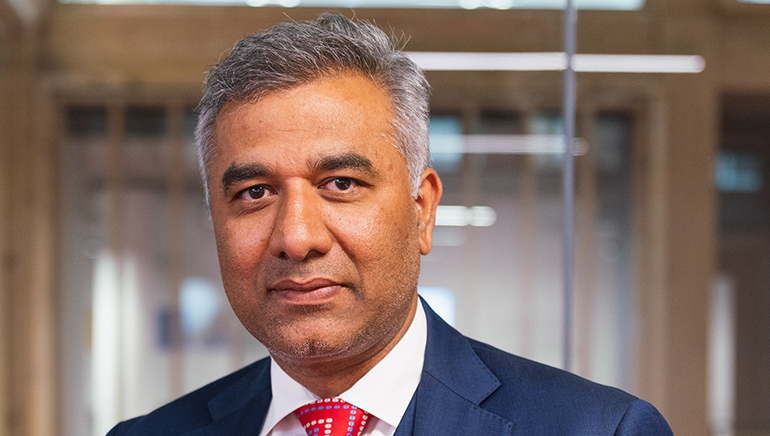 Dr. Rana hails from the village of Seohara in Uttar Pradesh, India. He went to the US to acquire an MBA at Ohio University before completing his MS and a PhD at Stevens Institute of Technology in New Jersey, USA. The well-versed leader is a seasoned investment banker. He began his investment banking career in investment portfolio management at UBS Investment Banking in New York. Furthermore, while working at HSBC’s New York office, he completed a series of complicated cross border equity/debt structured investments and financing transactions in Canada, the UK, Australia, South Africa, and Hong Kong. Following a career in finance, as an Assistant Vice President at HSBC in New York, he moved to London in April 2009 to launch his career as a social entrepreneur.

Right from his childhood, Dr. Rana had an innate passion for the transformative power of education. This fascination led him to seek ways to have a tangible impact on the marginalised communities. In 2008, he decided to get actively involved in the educational field to materialize his noble ambition of making education accessible to all. To that end, he formed the Lokmani Education Trust, an active nonprofit organisation that operates two higher education institutes in India, with a focus on teaching females from the poorest and most traditionally conservative districts.

AN ANALYTICAL BENT OF MIND

Dr. Rana’s passion lies in analysing various global education models and implementing them to help students realise their full potential via higher education. Following the early visible signs of success, he saw an opportunity to provide higher education access, along the same lines, in the United Kingdom, which led him to establish and lead the Global Education Group, which is situated in the United Kingdom. Despite the differences in context, he saw clear parallels to the work he had rolled out in India. There were deprived and marginalized communities largely supported by educational institutions and consequently held back by the system. GEDU is founded by Dr. Rana and has revenue of GBP 100 million. A portfolio of its offerings include the Global Banking School, the largest non-degree awarding higher education institution listed with the Office for Students (OFS) registered in the United Kingdom, Campuses in India (Lokmani.com), Dubai (gbs.ac.ae), and Malta (gbsplus.com). Englishpath.com is another venture by GEDU in the area of apprenticeship and language schools. Since the global environment is disrupting all aspects of our lives and businesses, Dr. Rana believes social and environmental sustainability must be weighed in planning the future of today’s ambitious youth.

Recognising the huge social benefit derived from educating people from deprived communities, Dr. Rana began to identify areas of deprivation to create educational opportunities for individuals to pursue courses in healthcare and business– the two areas in which he excels. Consequently, he launched the Global Banking School (GBS), which has carved a niche for itself as one of the fastest growing education providers in the UK. As the Group CEO and Chair of the Executive Board, the leader has been successfully leading the institution to achieve new heights of success. With GBS, he aims to create the next generation of pioneers and trailblazers in the industry.

GBS currently has 8 campuses across the UK – from Leeds to London, with the best faculty members to educate its students. Among all the attributes of GBS, its student centered approach deserves special mention. With over 5000 new undergraduates enrolling in 2021 alone, the school is set to witness an exponential growth. Furthermore, many of those students were attracted by recommendations and reputation, with the National Student Survey awarding GBS an astounding 93% for overall satisfaction in 2021 – an outstanding achievement during the COVID-19 pandemic. What’s more, considering UAE’s potential as an international educational hub in the making, Dr. Rana launched a fully-equipped GBS campus in Dubai’s Knowledge Park in 2021. It offers myriad industry-relevant courses, such as Higher Diplomas in Business Management, Digital Technology, Construction Management, and much more, to make the learners job-ready besides helping them achieve their career goals. In addition to its initial focus on finance and business, the school has diversified to offer healthcare training, which has been recognised as an asset that positively impacts local communities in a significant way. Dr. Rana’s goal is to contribute to the school’s growth and development by offering world class educational opportunities to more students from communities typically under represented in higher education. There are over 90% of students from BAME communities at this institution, a demographic which is almost unique in this sector and which is targeted not by quotas but by focusing on those who have not yet had the opportunity or background to pursue higher studies in the past. Furthermore, GBS has established a network of innovative partnerships with several UK-based universities to provide students with even greater opportunities to thrive and diversify their skills.

Keenly interested in charitable activities, he plays a proactive role in supporting literacy, numeracy, and project management in Commonwealth countries. Through his work, he has been able to provide access to higher education to over 20,000 students across the country and now globally. The benevolent leader has particularly been struck by the fact that the benefits of educational aid extend way beyond the students, through their immediate families as well as communities and ultimately to the country as a whole. Anyone who has benefited from GBS’ services can offer their skills and knowledge in a diverse range of ways, such as improving the collective capacities and expectations of the marginalised communities.