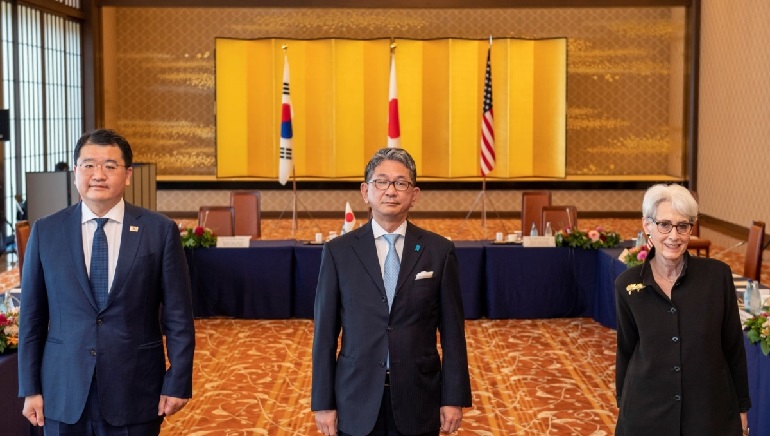 The United States, Japan, and South Korea reaffirmed their commitment to work together on North Korea’s regional threats and denuclearization. They fail to make any progress in bringing the two U.S. allies closer together.

The State Deputy Secretary of U.S. Wendy Sherman was in the conversation with the Japanese Vice Foreign Minister Takeo Mori and South Korea’s Choi Jong-Kun. Wendy said their alliance remains a “lynchpin of peace, security, and prosperity”. The officials reaffirmed maintaining freedom of navigation and overflight in the South China Sea. They even value the importance of respecting international law. The States of America opposed any unilateral attempts to change the status quo in the East China Sea and in the Taiwan Strait.

The United States and Japan have even raised concern about China pressing its claims to the South China Sea and the Japanese-controlled Senkaku island which is also claimed by China and calls it Diaoyu.

Sherman said, “When countries take actions that run counter to the United States’ interest or that threaten our partners and allies, we will not let those challenges go unanswered”. South Korea and Japan are trying to improve their allies since U.S. President called for stronger three-way cooperation in the face of the North Korean nuclear threats and challenges posed by China.