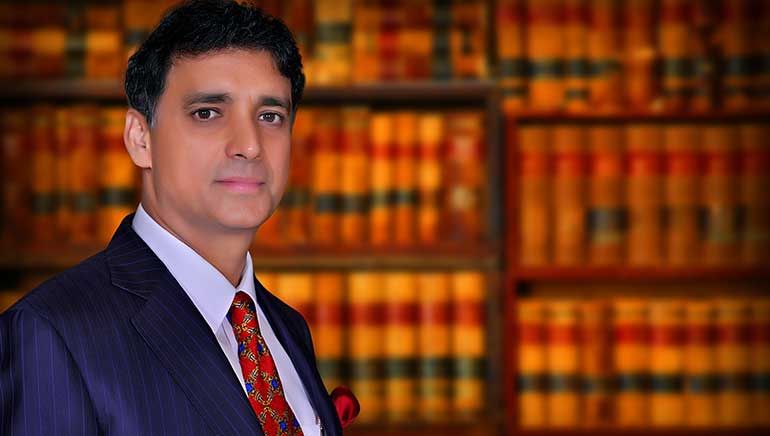 Rohit Kochhar’s story is inordinately inspiring as it is embellished with character, values, triumphs and endurance. Rising from a humble beginning, he has proven to the world that you can shape your own destiny if you pursue your goals with passion, perseverance and positivity BY ANAM KUMAR

Though Rohit Kochhar commenced his career with humble beginnings as a criminal lawyer 30 years ago, today he is globally renowned and respected as one of the top corporate lawyers in India and an exemplary legal entrepreneur. Staying true to his dreams, initially he had persevered under the tutelage of a senior, working on preventive detention matters.

However, eager to create his own identity and destiny, within a short span of three years, Rohit commenced his independent practice and another couple of years down the line, had built up a robust criminal law practice representing clients incarcerated in various prisons across the country, including Dum Dum Central and Presidency Jails in Calcutta, Trivandrum Jail and Tihar Jail, Delhi!!

He shares, “At age 30 and perched at the peak of my career as a young criminal lawyer, came the calling and a voice from within asked me to walk away and establish a full-service law firm with a global footprint. It was a move devoid of logic and rationality, as I had no experience of the ‘law firm world’ and had to completely reinvent myself as a lawyer, leader, and entrepreneur. The decision was also fraught with risk as it involved abandoning a flourishing criminal law practice for a completely uncertain world with no prior experience, learnings or relationships to back me. I nevertheless took the plunge in 1994 and as they say, the rest is history.”

He moved on confidently to create a future for himself and founded the Kochhar law firm. After a challenging and exciting journey of 23 years, and with the invaluable support of his committed and talented partners and other colleagues, Kochhar & Co. is recognised as one of the top-tier and leading corporate law firms in the sub-continent. With more than 200 lawyers, Kochhar & Co. is spread across seven States within the country and three overseas offices including Dubai where it has a licence to practice local UAE and Dubai International Financial Centre (DIFC) law.

Notwithstanding his unparalleled achievements, Rohit believes, “We have many miles to go before we sleep. Success cannot be static & measured on a prevailing set of statistics. It has to be an ever-evolving work in progress.”

Young entrepreneurs typically face myriad challenges when they embark on their mission to create and build a new enterprise. In Rohit Kochhar’s case, he faced a unique challenge. “The challenge I faced emerged from within. The childlike restlessness to constantly identify, attain and redefine new goals and boundaries can be a double-edged sword. Restlessness and creativity are bedfellows and maintaining a balance requires sagacity, experience and composure – qualities typically alien to young and hungry quintessential Turks,” he reminisces.

He believes that judicial reforms are the need of the hour, and such reforms need to be multifaceted and should include greater transparency and objectivity in the appointment of judges, improving the infrastructure of Indian courts, expeditious appointment of judges to deal with the huge backlog of pending cases and imparting regular training to judicial officers to be result-oriented and solution-seeking. He recognises the magnitude of the challenge and feels that “Given the size, complexity and diversity of our country, this is by no means a simple task and would require commitment, dedication and perseverance by the Government. The private sector needs to chip in by embracing a culture that discourages corrupt and inappropriate practices while managing their litigation in Indian courts. A major cultural shift is necessary – of choosing not the easy path but the right one.”

His wishlist includes improved judicial infrastructure in our country and greater accountability of judges to deal with cases in an efficient and time-bound manner. He is very vocal and emotional about the plight of innocents suffering for no faults of theirs. He further explains, “On the criminal side, there is a crying need to introduce stringent laws to fasten responsibility on and take punitive action against investigating officers who make innocent persons scapegoats by framing them in cases where the real culprits are either elusive or unidentifiable. It is heart-wrenching to come across incidents where faultless people are accused of crimes and sometimes even convicted because the investigation agencies are under media or other pressures to demonstrate successful closure of the case.”

“It has been a great honour for Kochhar & Co. and for me as its founding member to have been globally recognised for our achievements, quality and excellence in the domain of legal services,” he says.

Amongst other accolades, Rohit and his firm have been conferred the “International Council of Jurists Award” by the Prime Minister, the highly coveted “Rajiv Gandhi Award” for legal entrepreneurship, the Rashtriya Gaurav (National Pride) Award” for excellence in the field of corporate law as well as the prestigious National Bar Award by the All India Bar Association for being “The Most Dynamic and Progressive Indian Law Firm”.

He treasures his parents’ and his wife Sonali’s unconditional support during the most difficult and challenging periods in his career, “The sacrifices made by my wife have been countless and she has played an invaluable role in my growth and development – both as a professional and a human being. Her calm composure during the most testing periods has been a source of great comfort, solace and strength to me.”

Under the aegis of the Kochhar law firm, Rohit has established the Kochhar Care Foundation that espouses numerous social and child welfare causes including amongst others, the very critical and burning issue relating to child safety in Indian schools and eradication of corporal punishment in State-run schools. He also feels privileged to have been appointed as the Goodwill Ambassador for Sai Social Responsibility and Research Centre and is currently supporting their village development project in Noida.

He exhorts the youth to embrace the religion of excellence and not be solely guided by material goals. Believing that financial and material wealth is a by-product of professional success, which in turn is a function of passion and perseverance at work, he feels that seeking financial success without the necessary concomitant of hard work is being foolhardy.

“Be adventurous, creative and fearless in pursuing your goals and be willing to tread on paths other men haven’t walked on,” he advises. And then adds quoting Ralph Waldo Emerson, “Do not go where the path may lead, go instead where there is no path and leave a trail”.